Kromayer's father Karl (1829-1915) was a secret councilor and senior teacher at the Stralsund grammar school . The mother Franziska was the daughter of the classical philologist , teacher and vice principal at the local high school, Johannes von Gruber (1807-1875). In 1871 his father was transferred to Alsace-Lorraine , which was incorporated into Germany , first to Metz , then in 1875 to Weißenburg an der Lauter . At the local grammar school, Johannes Kromayer passed his Abitur with distinction. His younger brother was the dermatologist and university professor Ernst Kromayer (1862–1933).

Kromayer studied Classical Philology and Ancient History in Jena and Strasbourg and received his doctorate in 1883 with a thesis on Roman constitutional law. In 1881 he became a member of the old Strasbourg fraternity Germania . He first worked as a high school teacher in Thann , Metz and Strasbourg. In 1888 a scholarship enabled him to go on a research trip to Italy, Greece and Asia Minor. There he met Henriette Topuz, the daughter of a businessman from Smyrna , whom he married in 1890.

In 1898 Kromayer completed his habilitation in Strasbourg. At the suggestion of Mommsen and Wilamowitz and with the support of the Academy and the Great General Staff , Kromayer began a major research trip to Thermopylae , Chaironeia and Macedonia in the spring of 1900 . On his second research trip in 1907, Kromayer accompanied the Austrian captain Georg Veith , who had accompanied all of his war history work since then, until he was murdered by two shepherds on one of the expeditions in 1925. Kromayer's knowledge in the field of military history gained on his travels was published in the influential Four Volume Ancient Battlefields in Greece . His method of connecting his own investigations with the battle reports in ancient sources was heavily criticized by Hans Delbrück , among others , but it has established itself in ancient scholarship.

From Strasbourg in 1902 Kromayer went to the Franz-Josephs-Universität Czernowitz as a professor , and from 1913 to 1927 he taught in Leipzig . Since his retirement he lived in Berlin . In June 1934 Kromayer suffered a stroke, from the consequences of which he died three months later. Since 1914 he was a full member of the Archaeological Institute of the German Empire and since 1915 of the Saxon Academy of Sciences . 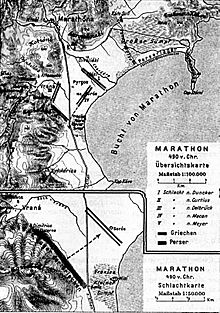