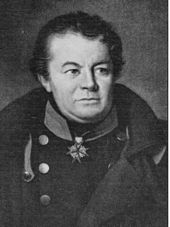 Knesebeck entered on July 1, 1782 as a private corporal in the infantry regiment "von Kalckstein" in Magdeburg . As an ensign , he then transferred to the Duke of Braunschweig infantry regiment on February 11, 1787 . In 1790 Knesebeck came to Silesia with his regiment . As a young second lieutenant , he learned there, even active as a writer and closely with the regiment and poet Franz von Kleist friends, Goethe know. Goethe praised von Kleist's verses, but said: “That beautiful verses and smooth rhymes were not yet made by a poet, and that with them one could only show how one could control language; after 50 years, every maid of honor will probably make her declaration of love in rhymes. ”Knesebeck later wrote in his memoirs that the fifty years had now passed and the newspapers show every day how correctly Goethe had predicted at the time.

In the campaign of 1792/94 Knesebeck was noticed by the Duke of Braunschweig for his efficiency; this drew him in 1794 for general staff work. In 1797 he became a prime lieutenant , two years later a captain and after another three years a major .

In 1803, as an adjutant to General Ernst von Rüchel , he wrote a memorandum to the Duke of Braunschweig about the establishment of a Landwehr , which he called the "Legion of Honor" for the Prussian state. This organizational draft is considered to be a noteworthy basis for the later Scharnhorst defense constitution. In December 1803 Knesebeck was appointed quartermaster in the general staff . With a mission to the Elector Wilhelm I of Hesse began a series of diplomatic actions in which he worked for Prussia.

Knesebeck experienced most of the 1806 campaign against Napoleon on the staff of General von Rüchel. Knesebeck's presence of mind intervening with the cavalry is said to be due to the fact that the King of Prussia Friedrich Wilhelm III. escaped imminent capture in the Battle of Auerstedt in 1806. He demonstrated strategic ability in the draft for the victorious battle of Pułtusk on December 26, 1806. The king awarded him the order of Pour le Mérite with oak leaves and promoted him to lieutenant colonel on May 16, 1807 .

On September 21, Knesebeck received the requested farewell; he withdrew to his estates, but the campaign of 1809 in Austria did not let him rest. The King of Prussia gave him a secret assignment to observe what was happening in Austria and to report a favorable opportunity to intervene.

In 1812 Knesebeck undertook a new difficult diplomatic task, the success of which was the basis for the victorious organization of the Allied battles against Napoleon in 1813. He received the official order from State Chancellor Hardenberg to tell the Emperor of Russia that Napoleon felt compelled to march his troops against Russia if the Emperor did not avoid war. From the King of Prussia, however, he received a secret order to persuade Tsar Alexander I to lure Napoleon into the vast expanse of his country and not to make peace until Napoleon's army had wiped itself out in vast Russia. According to his notes, the Emperor of Russia replied: "that he would not make peace even if he had to go back to Kazan ."

On March 6, 1813 Knesebeck was promoted to colonel and adjutant general of the king, on December 11 of the same year to lieutenant general. He took part in the wars of the years 1813 to 1815 to a large extent in the king's headquarters , on which, however, he often exerted a less favorable influence. In 1815 he tried to push Blücher aside.

Knesebeck's inscription on the cemetery portal in Neuruppin- Karwe

Again he was chosen to negotiate with Vienna about Austria's accession to the grand coalition . He later accompanied the King of Prussia to London and took part in the Congress of Vienna in 1815 .

King Friedrich Wilhelm III. In 1823 Knesebeck gave the parts of the Huysburg that were not assigned to the parish. He had large parts of the monastery razed and built a castle with the material in the nearby community of Röderhof .

As head of the riding ends Military Police Corps Knesebeck in 1825 to general of the infantry transported and 1831, according to Gneisenau , commander of the total in death Poland established Army of Observation appointed. In 1832 he received the Order of the Black Eagle for his services in the name of the Prussian state . The long peace period gave him the opportunity to devote himself to scientific studies and the poetry in which he had already tried his hand as a young officer.

On October 7th, 1847, King Friedrich Wilhelm IV awarded him the distinction of active field marshal with the highest letter of appreciation, which Knesebeck refused because of his age. He asked for his departure, which was granted to him with the simultaneous appointment as field marshal. The confidante of two Prussian kings died on January 12, 1848 in Berlin. 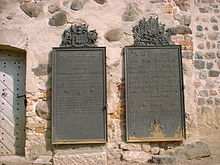 Memorial plaque on the church in Neuruppin- Karwe

His grave is in the old garrison cemetery in Berlin. It is dedicated to the city of Berlin as an honorary grave . There is a memorial plaque for him at the church in Neuruppin- Karwe, which says: “Carl Friedrich von dem Knesebeck, born in Carwe in 1768, died in Berlin in 1848. Royal Prussian General Field Marshal, fought in 17 battles in honor of his king and his nation and served the welfare of the fatherland from the age of 13 until his death. Peace to his ashes, honor his memory. "

Knesebeckstrasse in Berlin-Charlottenburg has been named after him since 1866.

Part of the estate of Karl Friedrich von dem Knesebeck, which runs from 1807 to 1815, is in the Secret State Archive of Prussian Cultural Heritage in Berlin. Another part was destroyed in a fire in the Army Archives in Potsdam in 1945.