Kiki Kogelnik (born January 22, 1935 in Graz ; † February 1, 1997 in Vienna ) was an Austrian artist , or the only Austrian pop artist. Her work includes painting , sculpture , graphics , installation (art) and an examination of unusual materials, such as used bombs or vinyl cloths. Kogelnik is described as the Austrian representative of Pop Art , even if she did not consider herself a Pop Art artist and one of the pioneers of internationally oriented performance art.

In the heyday of the ArtClub, the early 1950s, Kiki Kogelnik was not yet in Vienna. Kogelnik began her artistic training in Vienna in 1954 at the University of Applied Arts and moved to the Academy of Fine Arts in Vienna the following year . During the years at the academy, Kogelnik, together with Arnulf Rainer , Wolfgang Hollegha , Josef Mikl , Markus Prachensky and Maria Lassnig, belonged to the group of young avant-garde around the St. Stephan Gallery (from 1964 Galerie next St. Stephan ) under the direction of Msgr Otto Mauer . Her official artistic start was after four years of study at the academy. The first extensive section of Kiki Kogelnik's work includes abstract images. She took part in the gallery's first group exhibitions and presented abstract works, some of which were influenced by Serge Poliakoff of the École de Paris . In 1958/1959, Kogelnik spent a long time in Paris and made friends with the American artist Sam Francis , who persuaded them to move to America in 1961 . The phase of her abstract paintings was essentially completed when she moved to New York in 1961.

At the age of twenty-six, Kiki Kogelnik decided to stay in the United States for a longer period of time. She spent the first year in Santa Monica , California , but moved to New York in 1962 . In the New York studios she came across the works of abstract expressionism everywhere. She parted with her previous style of painting. Pop Art was just about to institutionalize itself as a style, but by no means the dominant view. There she became part of a close artist group that included Roy Lichtenstein , Claes Oldenburg , Andy Warhol , Larry Rivers , Tom Wesselmann and others. "Pop became a way of life", and with her extravagant outfits and headgear, Kogelnik itself became a walking happening . Kogelnik's work during this period was heavily influenced by the colors and materials of Pop Art, and she produced numerous colorful, euphoric space art works. In contrast to Pop Art artists, she avoided the glorification of commerce and the depiction of everyday objects, although she was known to favor plastic and the artificial as subjects. In summary, one can say that it did not quite reflect the colorful, glamorous paintings on the advertising aesthetics of the international developments of the 1960s.

“When it came to color, it was important to me to create dissonances, something aggressive, artificial” (Kiki Kogelnik).

In the early 1960s, Kogelnik began to cut out lifelike stencils of her artist friends from wrapping paper in order to transfer them onto the canvas of her paintings. These stencils became independent works of art made of vinyl in the 1970s as the "hangings" , which were presented on department store stands. In 1966, Kogelnik married the oncologist George Schwarz in London . After the birth of her son Mono, she returned to New York in 1967. In 1969 Kogelnik conceived a moon happening in the Viennese gallery next to St. Stephan . During the live broadcast of the moon landing of Apollo 11 , she produced a series of 500 moon thematic screen printing . Kiki Kogelnik was occupied with pop-related paintings for almost a decade. With the "Hangings" around 1970, human figures cut out, this period is completed. 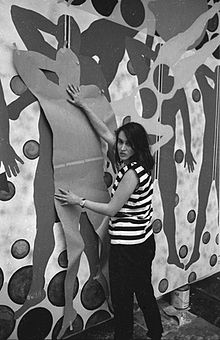 The "Hangings", which first appeared around 1970, represent the end of Kiki's period of pop-related works. On the other hand, they also mark the end of the euphoria : the belief in space travel legitimized exclusively by the urge to research and pioneering spirit was due to the uncovering of solid military interests shocked by her. The production technique of the "hangings" goes back to the cultivation of a work step in the preparation of the paintings. The life-size human figures corresponded to the templates she had made to transfer the figure into the picture surface. Instead of wrapping paper, they were now made of thick, colorful vinyl film. Shortly after the three-dimensional prototypes, in 1971, the “hangings” were translated back into the medium of painting, without changing the iconographic disposition.

Kiki Kogelnik used the imagery of commercial graphics and the costumes of her campaigners looked as if they were taken from old fashion journals. Their postures were based on targeted self-staging , on the repetition of recognized gestures that, first shaped by stars and then disseminated by anonymous mannequins , merged into the general gesture vocabulary. Her women's works dealt with the criticism of the role of women in advertising . As reported in the text by the Kunsthalle Krems : “In the 1970s, Kogelnik responded to the first wave of feminism with images of women in which she ironically dismantled female clichés and paraphrased sexual attributes and ideals of beauty from the media world.” Addressing feminist issues with irony, humor, and a cool pop aesthetic was unique to Kogelnik's work at the time. In 1974 she began to work occasionally with ceramics and used the plastic form to expand the picture surface. In 1978 she produced the 16 mm b / w short film CBGB with the writer and punk musician Jim Carroll in a role.

“Kiki Kogelnik's art cannot be divided into a painterly oeuvre. Between painting and three-dimensional objects, sculptures, pictures, ceramics, flowing transitions are visible and indicate their own spatial visual language. "

In the 1980s, dismembered human bodies, everyday objects, and signs began to fill Kogelnik's pictures. In the work cycle “Expansions” she used ceramic elements that were shown together with the canvas as a complete work. In later works, the human body was increasingly fragmented and manipulated until, in the 1990s, most of the works showed very abstract faces. During this time, Kogelnik also produced a series of glass sculptures, drawings and graphics in which she wanted to comment on commerce and decorative topics in the field of art, walking a tightrope between art and the kitsch newspaper.

Kiki Kogelnik died on February 1, 1997 in Vienna of complications from cancer and was buried in the family grave in Bleiburg. The Austrian gallery Belvedere showed a comprehensive retrospective in 1998 . After the artist's death, the “Kiki Kogelnik Foundation”, an American private foundation , was founded with headquarters in Vienna and New York. The Foundation preserves and archives the artistic legacy of Kiki Kogelnik and supports exhibition and research activities.

A stolen work was found outdoors in 2013 after 17 years; a work missing in February 2020 reappeared that same month.