Little Bear , in Latin Ursa Minor , 'little she-bear', is a constellation in the northern sky and circumpolar for Europe, i.e. a region of the sky that is visible all year round. The characteristic star train is also called the Little Dipper and contains the Pole Star ( Polaris ).

The constellation Little Bear as seen with the naked eye

From locations in the northern hemisphere, the Little Bear can be seen all year round from middle latitudes and is thus circumpolar . Its main star Alpha Ursae Minoris (α UMi), also called Polaris , is the Pole Star , more precisely: the North Pole Star . It is currently very close to the north celestial pole in extension of the earth's axis . Hence the firmament seems to revolve around this star.

The imaginary line of the shortest connection from Polaris to the horizon gives pretty much the north direction . Starting from the main stars of the Great Bear ( Ursa Maior ), one can easily find Polaris by extending the line connecting Merak (β UMa) and Dubhe (α UMa) beyond this by about five times.

Due to the precession movement of the earth, the celestial north pole describes a circular path in the sky around the ecliptic pole over a period of about 25,700 years . 2800 BC BC was Thuban , a star in the dragon , the pole star, today it is Polaris, and in the year 4000 it will be Errai , a star in Cepheus . 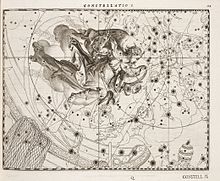 Depiction as Michael in the Coelum Stellatum Christianum

In early Greece one saw the Hesperides , nymphs guarding apples, bestowed eternal youth in the constellation . The apples were symbolized by the three tiller stars of today's Big Dipper.

According to another interpretation, the stars were part of the dragon constellation and represented its wings.

According to Greek tradition, Thales of Miletus is said to have the stars around 600 BC. First mentioned as an independent constellation in astronomy . However, there are no contemporary sources for this assumption. Possibly he took it over from the Phoenicians , who used the constellation of the Little Bear as orientation, which is why it was also known as "The Phoenician" in ancient times .

The constellation or the polar star are also known as cynosure in English-speaking countries . There are two versions of the origin of this name:

The current name of the Little Bear goes back to the saga of the nymph Callisto and her son Arkas , who were turned into bears.

In the Christian sky atlas of Julius Schiller this constellation was the Archangel Michael replaced.

In classical Greek mythology the following is reported about the origin of the little bear:

The nymph Callisto was raped by Zeus . She became pregnant and gave birth to a son whom she named Arkas . Hera , the jealous wife of Zeus, turned Callisto into a bear who had to roam the woods. Years later, Arkas met his mother while hunting without recognizing her. To prevent the murder of his mother, Zeus also turned Arkas into a bear. He grabbed both bears by the tails and hurled them into the sky - this explains the bears' supernaturally long tails. We see Callisto as the Big Bear, Arkas as the Little Bear.

Map of the constellation Little Bear

Photo of the constellation 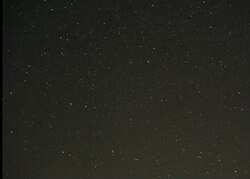 Play media file
Apparent movement of the little bear around the celestial pole.

Kochab (β Ursae Minoris), the second brightest star in Little Bear, is a shining orange star 126 light-years away. The name Kochab is derived from Arabic :الكوكب al-Kaukab or al-Kokab means "the star". Originally it was called الكوكب الشمالي al-kaukab ash-shemali , "the star of the north".

The white shining star γ Ursae Minoris is about 480 light years away. His Arabic nameفرقد Pherkad is derived from alifa al-farqadain and means "the darker of the two calves" (the lighter calf meant the star Kochab).

Polaris is a multiple star system 430 light years away with three stars orbiting a common center of gravity. The main star is a yellowish giant star , the brightness of which changes slightly over a period of four days. In the telescope , a companion star that is only 9.0 m bright is visible at a distance of 18.3 arc seconds . Another companion that orbits the system in 29.6 years is so faint that it can only be detected spectroscopically .

The Greek name for the little bear Kynosura (Κυνόσουρα) is the title of a novelistic love story by the Thuringian poet and kindergarten founder Ludwig Storch (1803–1881) from the Biedermeier period (1840).

The two "calves", d. H. the stars Kochab and Pherkad are also referred to as the two Ferkadan . (Compare: al-farqadain, the Arabic name for Pherkad). In the Makamen of the Arabic writer Ibn Al-Hariri , Gadhimet Elebresch, the king of Hira, is too proud to drink with human partners, and so he only recognizes the two Ferkadan as his drinking companions. This became known in the German-speaking world through the writer and orientalist Friedrich Rückert , who published a retouch in 1826 and 1837: “The Metamorphoses of Ebu Seid or the Makamen of Hariri”. And today's readers know this, like so many other things , of course through Arno Schmidt , who in his narrative work lets a person appear several times who only wants to toast with the Ferkadan.