Lipka (German: Linde ) is a village with a rural municipality in the north of the Polish Greater Poland Voivodeship . It is affiliated to the Powiat Złotowski ( Flatow District ).

Lyppa or Lypa is first mentioned in a document in 1376. In 1618 eleven farmers and four gardeners live here. The village belonged to the Flatow rule (now Polish: Złotów).

Since 1871 the place grew as a result of the construction of the Prussian Eastern Railway (today the Tczew – Küstrin-Kietz border ) and became the central railway station for the city of Preussisch Friedland (Debrzno) and numerous market towns.

In the 19th century, potato cultivation was a major livelihood for the residents of Linde, whose products went as far as the Ruhr area and the Netherlands . A starch factory, building material works, a brick factory and a dairy were other businesses in the village. The stone fruit and berry winery Dr. Johann Schliemann . At the end of the 19th century, the first electrically powered threshing machine in Prussia was used on the property .

The following places of residence existed in the municipality of Linde before the Second World War :

Linde was until 1945 a town in the district of Flatow in the administrative district of Posen-West Prussia (headquarters: Schneidemühl ) in the province of Pomerania . In 1939 the place had 1613 residents.

Towards the end of the Second World War , the Red Army occupied the region in the spring of 1945 . Soon after, Linde was placed under Polish administration. In the period that followed, the residents were evicted by the local Polish administration and replaced by Poles. The German village of Linde was renamed Lipka (the name " Lipka ", which was introduced in 1945 - lipa means linden in Polish - occurs nine times in Poland).

The village was incorporated into the Powiat Złotowski ( Flatow District ) in the Greater Poland Voivodeship (until 1998 Piła Voivodeship ). Since 1983 Lipka has been the official seat of the rural community named after him, Gmina Lipka. 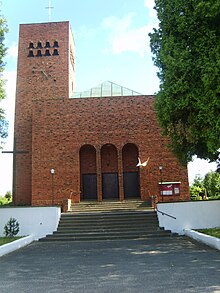 In the 16th to 17th centuries there were two chapels in Linde, the St. Anna Chapel and the St. Lorenz Chapel, which the Protestants used as churches; In 1699 both chapels had to be given to the Roman Catholic Church. The Protestant local residents were looked after by the second pastor in Preußisch Friedland (pl. Debrzno ) until 1930 , until the Protestant church built a modern brick church in the early 1930s . Since then, Linde has also been the Protestant parish seat, which Pastor Wilhelm Hermann Schaper held from 1930 to 1945 .

After 1945 the Linder Protestant church was expropriated in favor of the Catholic Church in Poland . The church is now called Kościół pw. Katarzyny , and the parish is part of the Dean's Office Zlotów I in the Roman Catholic Diocese of Bydgoszcz ( Bromberg ).

Evangelical church members living here are looked after by the parish office in Piła ( Schneidemühl ) in the diocese of Pomerania-Greater Poland of the Evangelical-Augsburg Church in Poland .

Lipka is under the name Lipka Krajeńska train station on the Tczew – Küstrin-Kietz border , the former Prussian Eastern Railway , which connected the cities of Berlin and Königsberg (Prussia) . The station is in operation and is included in the timetable table 426 of the Polish State Railways (PKP).

The Gmina Lipka includes 23 localities, which are spread over 18 districts ( sołectwo ):

The railway line that was laid by the Prussian Eastern Railway as a connection between Berlin and Königsberg (Prussia) has run through the area of ​​today's Gmina Lipka since 1871 . Today the Polish State Railways connects the towns of Kostrzyn nad Odrą ( Küstrin ) and Tczew ( Dirschau ) on this line (today the Tczew – Küstrin-Kietz border line ). Apart from the Lipka Krajeńska railway station , the municipality has no other railway station.

The Gmina Lipka is traversed in a north-south direction by the voivodship road 188 and connects it with the district towns of Złotów ( Flatow ), Piła ( Schneidemühl ) and Człuchów ( Schlochau ). The other parts of the community are linked with one another by side roads or country lanes.

Parishes in the powiat Złotowski