Jastrowie ( German Jastrow ) is a city in the Polish Voivodeship of Greater Poland with about 8,400 inhabitants.

The city is located in the former West Prussia on the northern edge of the Krainaer Seenplatte on both sides of the Mühlenfließ, a tributary of the Gwda (Küddow) . Extensive forest areas and the Jastrower Mountains stretch to the east. 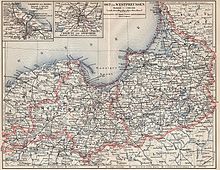 Jastrow in West Prussia , south of Neustettin in Hinterpommern and north of Schneidemühl , on a map from 1908

The Jastrow city coat of arms probably shows a bunch of grapes, but there is only vague information about viticulture on the southern slopes of the Jastrow mountains. Allegedly the vineyards were destroyed in the Polish-Swedish War in 1660. The remaining part of the mountains was mined from the municipal mineral raw material mine (probably from 1960).

A royal village called Jastrobe was first mentioned in a document from 1363. It belonged to the table goods of the Polish king and was subordinate to the Starostei Ush . The Starost Stanisław Górka converted the royal estate into a village under German law in 1560. In 1568 the Duke of Pomerania-Stettin , Barnim IX. , the owner of Jastrow, to cede the place to him. As a result, a new village was built in the immediate vicinity by the Poles, and the next few years were marked by mutual attacks. In the course of time, however, the Polish settlement went back to Jastrow.

The Protestantism was introduced in 1587 by crossing the Catholic priest, in 1600 the old church was demolished and replaced by a new building. However, the Protestants could only keep the former Catholic parish church until 1619, because that year the preacher Martin Goltbach converted to Catholicism, after which the church was returned to the Catholics. For the time being, the Evangelicals kept to the churches in the Pomeranian neighboring villages of Zamborst and Flederborn , but later - after 1773 - they got their own church with the support of the Prussian government. The religious war in Jastrow reached its climax in 1768 when soldiers of the Polish nobleman Roskowski killed the evangelical preacher Willich.

In 1602 Jastrow became a town under Magdeburg law , awarded by Peter Potulicki, Starost von Uść and heir to Flatow . The city privilege was granted in the following year by King Sigismund III. approved. The immigrant Scotsman Andreas Barry became the first mayor .

All wars of the 17th and 18th centuries affected Jastrow considerably. Additional damage was caused by large city fires. Jastrow was transferred to Prussia by Article V of the Warsaw Treaty of 1773 . It was administered by the Netzedistrikt , where it was one of the largest cities. The economic life was dominated by the cloth makers and shoemakers. After the Prussian administrative reform of 1815, Jastrow was incorporated into the Deutsch Krone district in the province of West Prussia . In 1849 Jastrow was also hit by the cholera epidemic that had been rampant in the district since 1848 . In 1879 it was connected to the Schneidemühl – Neustettin railway line, which was followed by the railway connection to Tempelburg in 1908.

At the beginning of the 20th century, Jastrow had a Protestant church, a Catholic church, a synagogue , a preparatory institute , a district court, an electricity company and various commercial and industrial production facilities.

After the First World War, Germany had to because of the provisions of the Versailles Treaty, large parts of West Prussia for the purpose of setting up the Polish Corridor to Poland to cede, and thus came Jastrow with the circle German crown to the newly formed province of Posen-West Prussia . However, this was dissolved again in 1938 and added to the province of Pomerania .

During the Second World War , Jastrow was included in the “Pommerstellung” weir system. When the Soviet front approached the city in early 1945, the population was evacuated to the West Pomeranian city of Demmin . After heavy fighting, Jastrow was occupied by the Red Army on February 2, 1945 . In the summer of 1945, the city was placed under Polish administration by the Soviet occupying power in accordance with the Potsdam Agreement, along with all of Western Pomerania , all of West Prussia and the southern half of East Prussia . The place name Jastrowie was introduced for Jastrow . In the following time the residents of Jastrow were driven out .

since the end of the Second World War

The following localities belong to the urban and rural municipality of Jastrowie:

Personalities: sons and daughters of the place

Trunk road 22 leads through the village from Gorzów Wielkopolski ( Landberg an der Warthe ) to Elbląg ( Elbing ), on which the next larger town Wałcz ( Deutsch Krone ) can be reached. There is also a train connection to Piła ( Schneidemühl ) to the south .

Parishes in the powiat Złotowski