Mação [ mɐˈsɐ̃ũ ] is a small town (Vila) in the district of the same name in Portugal .

In the shield of blue and silver waves, a red field. A bee floating in gold at the top right and left, with grapes in between. Down ahead in gold a sheep. A four-tower wall crown rests on the shield . In the white band at the base of the shield, the place name in black letters "VILA DE MAÇÃO".

The city coat of arms, officially introduced in 1930, reflects the key points of the local history, such as the red background for the bloody invasions after 1762, the sheep for the traditional importance of textile production and cattle breeding, and the grapes and the bees as a symbol of the important agriculture in the district , with the two important products wine and honey as representative symbols. Finally, the watercourses in a circle, which have always inspired agriculture, are represented by the blue waves.

The traces of human settlement go back to the Paleolithic . The region has always been linked to the historical province of Beira Baixa by its natural features .

The origin of the place name is controversial. One theory is based on the Latin “manso / mansionis” (for place of residence), another from a Franconian origin (see the old Portuguese and French “Maçon”, for bricklayer), from the vulgar Latin “macione” and later the Germanic “machio” -nis ".

In the course of the Arab conquest from 711 AD, the village was probably destroyed and abandoned, and repopulated after the Reconquista . Mação received its first city rights under Queen Elisabeth of Portugal , the holy Rainha Santa Isabel , the exact date has not been preserved. King D. Pedro granted the town renewed city rights on November 15, 1355. At the beginning of the 18th century, Mação became the seat of the Cabeção das Cizas district.

In 1762 Mação was the headquarters of the Anglo-Portuguese troops under Count zu Schaumburg-Lippe during the Seven Years' War in Europe . 15,000 soldiers stayed in the circle. In 1807 the place was sacked by French troops during the first Napoleonic invasion . Also during the Liberal Revolution of 1822 and especially in the following Miguelistenkrieg Mação was the scene of clashes. In the subsequent administrative reforms, the Mação district was expanded to include the previously independent Belver, Envendos and Carvoeiro districts. In 1867 it was dissolved itself, only to be restored on January 10, 1868.

The following municipalities ( Freguesias ) are in the Mação district: 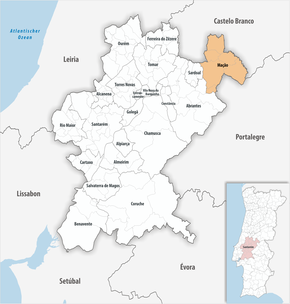 The Ortiga junction connects Mação with the A23 motorway 6 km south .

The place is integrated into the national long-distance bus network of Rede Expressos .

The closest railway line is the Linha da Beira Baixa . The national road N244 connects Mação with the shared train station of Belver and Gavião, about 10 km to the south .

Municípios in the Santarém district