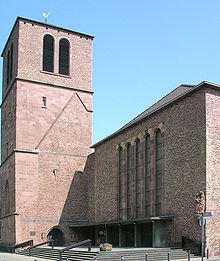 The Marienkirche is a Roman Catholic branch church in Düren . It belongs to the parish of St. Lukas ( Diocese of Aachen ) and was built in 1949 from rubble bricks according to plans by architect Hans Peter Fischer.

The Marienkirche is located in the western inner city of Düren on Hoeschplatz. The Franziskanerstraße runs just south of the church building along and east of the choir runs the Victor Gollancz Street. The Peschschule, the Leopold Hoesch Museum and the district court building are in the immediate vicinity of the Marienkirche . To the north of the church there is a large parking lot, on which the Düren City Theater was located until it was destroyed in World War II .

There has been a church building at the current location of the Marienkirche since 1459 . At that time, the Franciscans of the Cologne Franciscan Province ( Colonia ) from Koblenz founded a monastery at this point . In 1470 the monastery church could be consecrated with four altars .

In 1501 the stonemason Leonhard from Kornelimünster brought the Annahaupt from Mainz to Düren. It came first in the Marienkirche. It was only moved to today's Anna Church in 1506. In 1533 the monastery was destroyed by fire and the church was badly damaged. After the reconstruction, it remained in its structural fabric until November 16, 1944, the heaviest air raid on Düren .

After the Franciscan monastery was abolished in 1802 as part of the secularization , the monastery church became the second parish church in Düren in 1832 . Because of the large number of believers, the church quickly became too small. It was extended to the west by the westwork and bell tower according to plans by the Cologne architect Heinrich Renard in the neo-Gothic style and consecrated on November 21, 1915. In 1924 an organ from the Klais Organ Manufactory in Bonn with 51 registers was installed. At that time it was the largest organ in the Archdiocese of Cologne , to which Düren belonged until the re-establishment of the Diocese of Aachen in 1930. After November 16, 1944, the church was completely destroyed. The services were temporarily held at the evangelical congregation on Philippstrasse .

On May 1, 1949, the foundation stone for the new building of today's church was laid on the site of the destroyed church. The new church was consecrated on November 6, 1949 by the Aachen bishop Johannes Joseph van der Velden . The tower was restored on November 27, 1955. In 1992 the church received a new, fully mechanical organ with 29 registers from master organ builder Heinz Wilbrand, Übach-Palenberg. This replaced a work by Weimbs Orgelbau from Hellenthal with 23 registers from 1960.

The parishes of St. Anna, St. Marien, St. Bonifatius, St. Josef, St. Cyriakus and St. Antonius merged on January 1, 2010 to form the new large parish of St. Lukas. From February to September 2010 the church was converted into a meeting place, as well as a library, parish office and church service room. The stump of the steeple from 1915 of the old Marienkirche and the baroque Madonna inside the church from 1673 are registered under number 1/15 in the list of monuments of the city of Düren. The Madonna on the south-west corner of the church is a duplicate of the listed Madonna inside the church. It was made in 1987 from red sandstone.

In June 2018, the foundations of the Franciscan monastery were uncovered during the work to create a parking lot between the church and Philippstrasse .

The following pastors worked at St. Marien from the elevation to the parish in 1832 until the dissolution in 2010:

Churches and chapels in Düren