Dutch Resistance 1940-1945 ( Dutch : Nederlands verzet in de Tweede Wereldoorlog ) is a name for the struggle of Dutch freedom fighters against the German occupation during the Second World War . The term also describes the revolt of the Dutch colonial rulers of the Dutch East Indies against the occupation of this colony by the Japanese army in 1941/42.

→ Main article: History of the Netherlands

After the Nazi regime began the attack on Poland on September 1, 1939 , the Kingdom of the Netherlands (as in the First World War ) declared its neutrality . It hoped not to become involved in acts of war. Even Belgium and Luxembourg declared their neutrality. On 10 May 1940, the Wehrmacht invaded international law , all three states in order in their incidence in France ( Western campaign the heavily fortified) Maginot Line to get around and a trench war to be avoided.

The Dutch armed forces were unable to stop the invasion and only offered sporadic resistance. After the bombing of Rotterdam on May 14, 1940 , the Netherlands capitulated.

→ Main article : History of the Netherlands # May 1940 - German occupation

On May 18, 1940, Adolf Hitler appointed Arthur Seyss-Inquart as Reich Commissioner of the Occupied Netherlands and on May 29, 1940 the German General Friedrich Christiansen as Commander of the Wehrmacht . Soon after, the persecution, internment and deportation of Jews , Sinti and Roma living in the Netherlands began . In 1941 the Amersfoort transit camp , the Westerbork transit camp and the Herzogenbusch concentration camp in 1942 and the Villa Bouchina in 1943 were converted or rebuilt for this purpose. 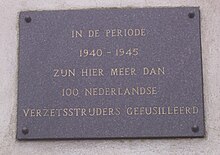 Since 1941, the Nationaal-Socialistische Bewegungsing (NSB) , founded on December 14, 1931, was the only party allowed in the Netherlands . The NSB supported the independence of the Netherlands, but at the same time collaborated with the German occupying power. Since the attack, there has been no approved opposition or even rudimentary democratic party in the Netherlands.

After the secret night and fog decree of October 7, 1941, people suspected of resistance were secretly deported to Germany, including in the Netherlands, where they were sentenced or sent to concentration camps. The disappearance without a trace should serve as a deterrent.

From 1942 the forced recruitment for labor was introduced in the German Reich and the actions for the evacuation of forced labor increased steadily. Many Dutch people evaded forced labor by going underground.

On September 5, 1943, the General Commissioners Hanns Albin Rauter , Friedrich Wimmer and Wilhelm Ritterbusch decided to introduce assassinations by death squads of the Dutch Waffen SS as retaliation for attacks by the Dutch resistance. The Silbertanne special command under Henk Feldmeijer emerged from these groups .

The Dutch government in exile began on July 28, 1940, the BBC , the program of Radio Oranje ( "The voice of the struggling Netherlands") to send. From 1943 u. a. therefore the possession of radio receivers was banned by the German occupiers and 80% of the devices were confiscated.

The England drivers ( Engelandvaarders ) were individuals or small groups who tried to get to England in order to work against the Axis powers from there. They joined the Allied forces, served on merchant ships and were used by British intelligence. 1,700 British travelers came through to England, how many died or were murdered in concentration camps is not known.

The Dutch government in exile in London helped set up a foundation ('Nationaal Steunfonds') with which it tried to support activities of the Dutch resistance. This resistance included the 'Landelijke Organizatie voor Hulp aan Onderduikers' (LO), founded at the end of 1942, which tried to help people in hiding with false papers, food stamps , money and hiding.

In November 1940, the occupiers announced that Jews would be banned from working. This led to brief strikes by students and some staff in the universities of Delft and Leiden . The February strike in Amsterdam and North Holland in February 1941 was a unique reaction in occupied Europe to the first deportations of Jews to the Netherlands . The two-day strike, organized by communists, took part in around 40,000–50,000 people. Dutch partisans hid Jews from Holland and Germany (e.g. Anne Frank or Edith Stein ), as well as Dutch people who went into hiding before their labor service or work assignment, refugee prisoners of war (especially shot down crews of Allied aircraft) or helped them to escape across the English Channel German Wehrmacht deserters, reported the extent, condition and location of German Wehrmacht units to Great Britain, in particular their preparation for the planned invasion of Great Britain , and carried out attacks on German occupation agencies and military transports. Illegal magazines soon appeared, with a total of 1,100 issues. Some of the newspapers such as Het Parool , Trouw and the weekly Vrij Nederland still exist today.

The banker Walraven van Hall paid a regular daily allowance for resistance fighters and tens of thousands of other citizens. The department had up to 2,000 illegal employees. In April and May 1943 there were general strikes for a few days , especially in the east of the country , when demobilized Dutch soldiers were arrested again. 90 civilians died.

The Dutchman Johan Hendrik Weidner founded the Dutch-Paris network in 1941 . This enabled around 1,000 persecuted people, mainly Jews, prominent personalities from the occupied countries and shot down Allied aircraft crews, to flee to Switzerland or to Spain and Portugal.

On September 17, 1944, the Dutch government called for a general strike by the railways to hinder German replenishment and regrouping and thus support the Allied Operation Market Garden to advance quickly over Arnhem . The German occupiers reacted with a food embargo lasting several weeks. Both of these increased the food shortage and, with the early and severe winter, led to a famine .

According to the Dutch Institute for War Documentation (NIOD), the Dutch hid 350,000 people at the height of the resistance. These people were supported by more than 500,000 people - up to a tenth of the population at the time. There were 25,000 Jews among those in hiding.

The armed resistance emerged from the network of people hiding refugees (LO). First, ID cards and ration cards were obtained for actions. Later there were liberation actions of arrested resistance members, in which more violence was used. A dozen times with spectacular success. The Marx-Lenin-Luxemburg-Front (MLL-Front) around Henk Sneevliet , Willem Dolleman and Ab Menist played an important role in the resistance, for example during the February strike, until it was broken up in April 1942 . All three were executed by the German occupiers on April 12, 1942. The MLL front differed from most of the other resistance groups in that it refused to cooperate with forces it regarded as monarchist or imperialist. It had around 500 permanent members and published the well-read underground newspaper Spartacus every fortnight with a circulation of around 5000 copies.

In 1944, the National Organization for Help for People in Hiding ( Landelijke Organizatie voor Hulp aan Onderduikers ) was the most important group in the accommodation and escape of people in hiding. She provided them with counterfeit or organized authentic food stamps and identification documents and had informants in the local police authorities.

The LKP ( Landelijke Knokploegen ) with about 750 members in 1944 consisted of local groups and carried out sabotage and occasional murder attacks on individual soldiers and collaborators . She supplied the LO with ration cards from raids on local administrative offices.

The RVV ( Raad van Verzet ) with several thousand members operated sabotage and protected people in hiding. He was in direct contact with the Bureau Inlichtingen (BI), the secret service of the government in exile in London.

The OD ( Ordedienst ) consisted mainly of former officers and public employees who had been replaced by National Socialists or collaborators. They carried out espionage and prepared themselves to take over the administration and to maintain order in the event of liberation. The espionage arm was the GDN ( Geheime Dienst Nederland ).

After negotiations, LKP, OD and RVV merged with a royal resolution of September 5, 1944 to form the " Inland Armed Forces " ( Dutch Inner Lands Strijdkrachten ; BS for short ) under the joint command of Prince Bernhard .

From 1940 to 1944 the British Special Operations Executive (SOE) dropped numerous agents in support of the Dutch resistance. In the England game , the German defense succeeded in unmasking 54 Dutch agents, captured extensive weapons material and shot down 12 heavy bombers used for air transport on the return flight.

On February 5, 1943, Hendrik Seyffardt , the commander of the Dutch volunteer legion of the Waffen-SS, was shot by the resistance fighters Jan Verelimin and Gerrit Kastein .

On March 27, 1943, a group led by Gerrit van der Veen and Willem Arondeus carried out the attack on the Amsterdam residents ' registration office, stealing 600 blank ID cards and destroying 800,000 residents' cards, which should hinder deportations , forced labor evictions and identity checks in Amsterdam. 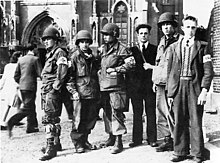 On September 17, 1944, the Allies launched Operation Market Garden on a rapid advance through the Netherlands via Eindhoven and Nijmegen in order to build a bridgehead over the Rhine near Arnhem . The various resistance groups supported the advance by fighting, caring for the wounded, transporting German prisoners away, providing intelligence and logistical support as well as a nationwide railway strike. When the operation failed, the underground movements helped Allied soldiers go into hiding. In order to raise the morale of the resistance, some of the resistance members were provided with uniforms. This saved the lives of many of them when they were captured by the Germans.

On the night of September 30th to October 1st, 1944, a Wehrmacht vehicle was attacked by a resistance group in Putten , one officer was fatally injured and another was taken prisoner. The place was then destroyed on the orders of the Wehrmacht commander-in-chief Friedrich Christiansen and the male residents were deported to concentration camps. Of the 660 men arrested, 552 died and the war crime was treated as a post-war Putten case in a Dutch court.

On December 7, 1944, a 17-member group (including resistance fighters, an Armenian, two Allied soldiers and a Dutch member of an English commando ) tried to flee from the still occupied island of Schouwen-Duiveland . An exchange of fire broke out and the ten were captured, tortured and hanged by Renesse .

On March 6, 1945, the car of the Higher SS and Police Leader Hans Rauter between Arnheim and Apeldoorn was caught in an ambush prepared for a meat transport. Rauter survived seriously injured, and in retaliation , on March 8, 263 prisoners arbitrarily selected from prisons and concentration camps were executed at various locations by the Germans who assumed a targeted assassination attempt on Rauter . 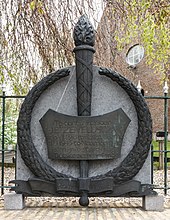 Today we are reminded of this time, which was shaped by the occupation and oppression of the population as well as the kidnapping / murder of the inhabitants of the Jewish faith and the resistance to this. a. the Verzetsmuseum in Amsterdam .

In Aalten, not far from Bocholt, a hiding museum was set up in 2005, which makes it possible to experience the grotesque, real, temporary situation when the local headquarters and people in hiding were housed in the same building on the ground floor. The Aalter hid 2,500 people for a population of 10,000 at that time.

In 1945 the Bloemendaal Cemetery of Honor was established for the remains of 372 resistance fighters executed in the Kennemerduinen .

The WW2 Escape Lines Memorial Society commemorates the escape helpers for allied aircrews shot down, civilians and soldiers who fled, and soldiers who were dispersed, especially after Operation Market Garden.

Yad Vashem lists 5,669 Dutch people as Righteous Among the Nations for saving Jews .

The Dutch author Maarten 't Hart deals with the Dutch resistance in his novels The Raging of the Whole World and Die Netzflickerin . A biography by Theun de Vries and the film The Girl with Red Hair by director Ben Verbong appeared about Hannie Schaft .