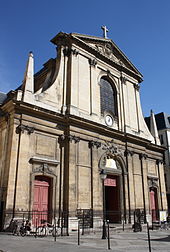 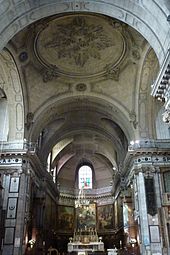 Notre-Dame-des-Victoires, interior view with a view of the choir

The Catholic parish church of Notre-Dame-des-Victoires ( Our Lady of Victories) is one of the five Parisian churches that bears the honorary title of Basilica minor , which the Pope bestows on important church buildings. The church is located on the Place des Petits-Pères in the 2nd arrondissement of Paris. The nearest metro station is Bourse on line 3 . In 1972 the church was added to the list of architectural monuments in France as a Monument historique .

In the 17th century, a mendicant order under the rule of St. Augustine (354-430) had settled on the site of today's church . The friars belonged to the barefoot Augustinians and were called Petits Pères (Minor Fathers) in contrast to the Saints Pères (Holy Fathers), whose abbey was located in what is now the 6th arrondissement of Paris, on Rue des Saints-Pères.

Notre-Dame-des-Victoires was under the French King Louis XIII. (1601–1643) built as a votive church after he had won a victory over the Huguenots in 1628 with the capture of La Rochelle . The king had made a vow to build a church in the event of Our Lady 's victory. He entrusted the Augustinians with the task of building a church in honor of this victory and all others who would follow, and granted them financial support on the condition that the new church of Notre-Dame-des-Victoires (Our Lady of the victories) would be consecrated.

In 1629, the construction of the church began according to plans by the architect Pierre Le Muet . The first Archbishop of Paris, Jean-François de Gondi (1584-1654), blessed the foundations and Louis XIII. laid the foundation . The work was continued under the architects Libéral Bruant , Robert Boudin and Gabriel Le Duc. The church was consecrated in 1666 , although the construction was still unfinished. It was not until 1740, 110 years after construction began, that the work could be completed under the direction of the architect Jean-Sylvain Cartaud (1675–1758).

During the French Revolution , the monastery was closed and the library with 40,000 volumes closed. The church housed offices of the Loterie Nationale (State Lottery) and later the stock exchange . In 1809 the building became a parish church, since then it has been used as a place of worship again. In 1858 the convent buildings were torn down and barracks and the Mairie , the mayor's office, of the 2nd arrondissement were built on the site.

In 1927 the church of Pope Pius XI. awarded the title of minor basilica .

The entrance facade was built in 1737 by the architect Cartault. It is divided into two floors. The lower floor is divided into Ionic pilasters , the upper floor Corinthian . The conclusion is a triangular pediment on which the coat of arms of the French kings and the royal crown are depicted. Above the main portal, angel heads frame a triangle in which the name of God, Yahweh , is inscribed in Hebrew letters.

The plan of the church is a Latin cross . The nave consists of a single nave with a length of 37 meters and is divided into four bays . Chapels are attached to the side of each yoke . The transept protrudes only a little beyond the width of the nave. The choir , which was reserved for the friars, is unusually large with a length of almost 25 meters.

Leaded glass window depicting Louis XIII. and Anna of Austria and the vision of brother Fiacre

In the transept and choir there are stained glass windows by Antoine Lusson, like the central crucifixion scene in the choir from 1854. The other windows in the choir, scenes from the life of Mary and the papal coat of arms, were created by Desgranges.

A window in the left transept from 1854 depicts Louis XIII. and his wife Anna of Austria (1601–1666) who, out of gratitude for the long-awaited birth of a son, the later Louis XIV , place France under the Mother of God. The lower left scenes show the vision of Brother Fiacre, to whom Mary presents the future heir to the throne.

In the chapel of St. Therese of Lisieux (1873-1897), which was set up following her canonization in 1925, a window depicts the pilgrimage of St. Theresa to the Church of Notre-Dame-des-Victoires in 1887 Created in 1931 by Mauméjean stained glass .

The organ front by Louis Régnier is decorated with reliefs of Christ, Mary and Saint Joseph . The organ work comes from the organ builder Lesclop from 1739. It was last rebuilt by the organ builder Kern (Strasbourg) in 1973 and restored to its original state, with changes made in the years 1870 (Barker) and 1898 (John Abbey) being reversed were made. The instrument has 49 stops on four manuals and a pedal . The playing and stop actions are mechanical.

The Notre-Dame-des-Victoires church houses over 37,000 votive tablets dedicated to the Mother of God . After the pastor Charles Dufriche-Desgenettes consecrated the church to the Immaculate Heart of Mary in 1836, the church subsequently developed into one of the most important Marian shrines in Christianity.