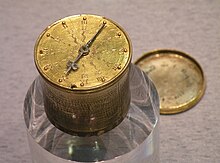 The Nuremberg egg , a later form of clock, was mistakenly associated with Peter Henlein

Peter Henlein (* around 1479 or around 1485 in Nuremberg ; † August 1542 there ) was a German master locksmith who worked as a clockmaker . In Germany, he is credited with inventing the watch that can be worn on the body .

Around 1495 Peter Henlein was a locksmith's apprentice. After a young Nuremberg master locksmith died in a scuffle on September 8, 1504, Henlein fled to the asylum of the barefoot monastery (on the site of today's Hypovereinsbank on Lorenzer Platz) and received monastery asylum there. About two months later, he was given safe conduct. A four-year trial followed during which Henlein was sentenced to a fine payable to the victim's children. On November 16, 1509, the journeyman locksmith Henlein became master locksmith of the guild in Nuremberg. Peter Henlein had a brother named Hermann, who was executed in Augsburg in 1523 for the murder of an eight-year-old girl on Nuremberg's main market square (near today's Prantl- Stein) in 1516 (when trying to help his brother in the process, Peter Henlein himself is said to be criminal Also in 1529 because of a fight and in 1530 he came into conflict with the law again). After the death of his first wife, Kunigunde, Peter Henlein married Margarethe († 1540) around 1520/1521. After Margaret's death he married for the third time and on October 12, 1540, he married Walburga Schreyer. Henlein's neighbor, the redsmith or bronze caster Peter Vischer the Elder , owned three houses in the Katharinengraben. Accordingly, Peter Henlein, the “original maker of S. Katharina Graben”, lived around 1522 as the owner of a mortgage-burdened house, presumably in today's Peter-Vischer-Straße (No. 19 or 21). Henlein died in the summer of around 60 years of age (between May 31 and September 20, according to the entry in St. Sebald's death bells) in 1542.

Henlein as a watchmaker

Before November 1511, Henlein was already making small iron clocks "that can be taken anywhere" . In 1512 Peter Henlein was mentioned by the humanist Johannes Cochläus in his Brief Description of Germany ( Brevis Germaniae descriptio ) as a manufacturer of small, portable wheel clocks; these should run for 40 hours, "even if they are carried in a pocket in the folds of the robe" . According to the Cochläus -stelle, Henlein was the first in Germany to realize watches that could be worn on the body.

Henlein's wearable clocks may have been in the shape of a muskrat , which was very popular around 1500. In addition, they could also have been can-shaped. Henlein's muskrat watch is documented for the first time on 1524 (according to the Nuremberg city records, he received 15 florins (guilders) on January 11, 1524  for a "gouled pysn apple for all things with an oraologium" ). There is a presumption that some of his portable watches also had a striking mechanism. The latter is based on a location in the 1512 published book by geography Cochlaeus (if the Latin , pulsant ' with beat' is to be translated, and not with , 'tick ). These clocks are not to be confused with the Nuremberg eggs , a clock shape that was only created after Henlein's death. In any case, the term is a corruption of the then common term for Ührlein.

A can-shaped clock in the British Museum in London can most likely be attributed to him. A clock in a muskrat case , allegedly dated 1505 (Roman MDV ) and which has been presented on the Internet on various occasions , is associated with Henlein because of the monogram PHN .

While products made by his hand are difficult to prove, Peter Henlein is a historical figure. He also made large clocks and achieved high esteem and some wealth. As a well-known watchmaker and watch appraiser, Henlein is not documented before 1520. Among his customers were princes like Albrecht von Brandenburg (end of 1529) and von Henlein, who supplied small clocks from Mecklenburg-Schwerin between 1526 and 1542, in Schwerin . From the 1520s onwards, Nuremberg city records name Henlein more often as a contractor and payee. Henlein received his payment in January 1525 for a "selbgeend arologium", which was provided with a case that was gold-plated by Richel (it was probably a drum or can clock).

Around 1535, Henlein repaired the "Hörlein" (a little watch for duty time control) in the office of the town hall of Nuremberg . In the second half of 1541 Henlein received the order to manufacture and install a large tower clock for the Nuremberg rule Lichtenau near Ansbach .

Henlein was working as a watch appraiser around the end of 1541 when he was consulted about the church tower clock in Hersbruck to convert it as part of a church tower elevation.

For watchmakers in the German-speaking world, Peter Henlein (known as the “inventor of the pocket watch”) has been a historical figure of integration of national standing for centuries, especially during the Nazi era . The romanticizing feature film The Immortal Heart by Veit Harlan from 1939 has, however, greatly contributed to the confusion. Henlein's name, on the other hand, is rarely found in watch history literature in non-German-speaking countries.

In 1979/1985, the question of which of Henlein's two estimated years of birth should be celebrated as an anniversary sparked a heated argument between art historians at the Germanic National Museum in Nuremberg and German watchmakers. In the course of this dispute put Jürgen Abeler under the title comes to Peter Henlein before the first comprehensive and detailed documentation on the life and work of Peter Henlein, which sums up the state of knowledge at that time. In the 1980s there was also evidence of contacts between a Mecklenburg client and Henlein. An exhibition in the Germanisches Nationalmuseum in Nuremberg in 2014/2015 investigated questions about Peter Henlein and early pocket watches - the volume accompanying the exhibition gives the best and most in-depth summary of today's knowledge about life and work. As a result of the exhibition, two letters by Peter Henlein were found in Schwerin, one of them autograph. In 2016, his likely residential and workshop building in Nuremberg was identified.

Peter-Henlein-Stein in front of the Glashütte Watchmaking School

In the Walhalla , the commemorative plaque for Peter Henlein completes the series of 64 plaques that were installed in the opening year 1842 for those people for whom no portrait models were available.

In 1903, a Peter Henlein stone was inaugurated in front of the German watchmaking school in Glashütte .

In 1905 the Peter Henlein Fountain with a bronze statue of the watchmaker was created as a memorial based on a design by the sculptor Max Meißner (cast in the Lenz art foundry in Nuremberg). The memorial fountain is located on Nuremberg's Hefnersplatz in the old town of Lorenz.

In 1995 the Peter Henlein Realschule in Nuremberg was named after the watchmaker.

Numerous streets bear his name; except in his hometown Nuremberg z. B. in Amberg , Augsburg , Bad Kissingen , Bremen , Cuxhaven , Forchheim , Künzell , Munich and Schönwald in the Black Forest .