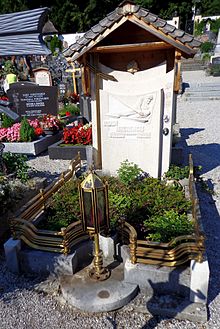 Rudi Nierlich's grave in St. Wolfgang in the Salzkammergut.

Rudolf "Rudi" Nierlich (born February 20, 1966 in Bad Ischl , † May 18, 1991 in St. Wolfgang in the Salzkammergut ) was an Austrian ski racer . The slalom and giant slalom specialist celebrated eight World Cup victories in his career and was world champion three times .

Rudi Nierlich grew up in St. Wolfgang in the Salzkammergut and began an apprenticeship as a carpenter after completing his schooling before concentrating fully on ski racing. After initial successes in the youth field, including several medals at Austrian school championships, he was accepted into the squad of the Austrian Ski Association in the early 1980s . He celebrated his first international success at the 1984 Junior World Championships in Sugarloaf , where he won the gold medal in the giant slalom with a lead of over three seconds over his teammate Helmut Mayer . In the same year he was three times Austrian junior champion. In the European Cup he achieved two giant slalom victories and another two podium places in the 1984/85 season , with which he won the giant slalom classification and was second in the overall classification. The following winter he won a total of four slalom and giant slalom races in the European Cup, won the overall and giant slalom classification and came second in the slalom classification.

After his successes in the European Cup, Nierlich competed regularly in the World Cup from the 1986/87 season . He had already taken part in a few World Cup races before and in December 1984 as 15th in the combination of Madonna di Campiglio, he got his first World Cup point. With two fourth places in the races in Adelboden and Kitzbühel , he qualified for the 1987 World Championship in Crans-Montana , surprisingly finished seventh in the Super-G, but retired in his special disciplines of slalom and giant slalom in the first round. His risky, but technically advanced driving style (he was already showing signs of carving technique, although the skis were not so well fitted at the time) also brought him many failures in the World Cup, but at the end of the season on March 22, 1987, he reached the giant slalom in Sarajevo the podium for the first time. In the same winter he became Austrian champion in giant slalom.

In the winter of 1989/90 , Nierlich made it onto the podium four times, but only won the Kitzbühel slalom. At the 1991 World Championships in Saalbach-Hinterglemm , he successfully defended his title in giant slalom after a failure in slalom. This victory was officially confirmed by the International Ski Federation (FIS) only a few days after the race, as Nierlich had started the first run in a racing suit that lacked the required seal as proof of the FIS inspection. After the World Championships he celebrated his next World Cup victories in the slaloms of Oppdal and Aspen and achieved second place in the Giant Slalom World Cup and third place in the slalom and overall World Cup with a further seven podium places.

Nierlich was very popular with teammates because of his calm and humble demeanor; in interviews he was often very taciturn in his answers. His saying “Wonns laft, donn laft's!” (“If it works, then it works!”) Is quoted again and again by reporters and ski racers.

In the early hours of May 18, 1991, the 25-year-old's career came to a tragic end. In a car accident near St. Wolfgang, he drove his vehicle off the road in heavy rain, hit a house wall and suffered fatal injuries. He was buried in the cemetery of St. Wolfgang in the Salzkammergut .

24 years later, early in the morning on August 21, 2015, a 19-year-old firefighter was killed in the same way at the same location.