from Wikipedia, the free encyclopedia
This is the sighted version , which was flagged on September 6, 2021 . There is 1 pending change that has yet to be viewed.

East side of the Béthune castle

The Béthune Castle ( French Château de Béthune ), also called La Chapelle-d'Angillon Castle , is a castle complex in the French commune of La Chapelle-d'Angillon in Berry on the Route historique Jacques Cœur about 28 kilometers north of Bourges . The castle stands on the southern edge of the village and on the left bank of the Petite Sauldre , which feeds the large castle pond.

Built in the High Middle Ages by the Sully family, the former castle was married to the Counts of Nevers in the early 15th century , under whom it was expanded and converted into a castle in the 15th and 16th centuries. In 1607 Maximilien de Béthune, duc de Sully acquired the property and added a castle park with an artificial lake. This not only gave the facility essentially its current shape, but also its current name.

The complex belongs to the extended circle of castles of the Loire and its donjon is one of the oldest in the Cher département . After the first parts of the castle had already been placed under monument protection as Monument historique in 1926 , all castle buildings were included as registered Monument historique in France's national monument list in June 1963 , before their facades and roofs were even classified in May 1984 ( Monument historique classé ) .

The beginnings of La Chapelle-d'Angillon and its castle go back to a Greek hermit named Jacques de Saxeau, who settled on the Petite Sauldre in the 9th century and built a chapel ( French chapelle ) there. A settlement formed around this chapel, which in the 11th century was on the land of Gilon de Seuly (also Sully). One of Gilon's ancestors belonged to Vikings who had come across the Loire , Sauldre and Petite Sauldre in the 10th century , and he had the area around La Chapelle-d'Angillon, Sully-sur-Loire and Les Aix-d ' Angillon 950 taken for himself. Gilon was the namesake of the place mentioned in 1160 as castrum , because Capella Domini Gillonis ( German  chapel of Mr. Gillon ) initially developed "Capel Dam Gilon" and finally the name Chapelle d'Angillon. Presumably, at the end of the 11th century, Gilon was the builder of a donjon in the vicinity of the chapel, from which the later castle emerged. Perhaps the massive defense and residential tower was not built until the beginning of the 12th century by Gilon's son-in-law and successor Guillaume de Sully , a son of Count Stephan II of Blois .

The Sully family held the castle of La Chapelle-d'Angillon until the early 15th century. Then Louis de Sully's daughter married Marie, widow of Guy VI. de La Trémoilles, on February 27, 1401 in third marriage the Connétable of France , Charles I. d'Albret , Count of Nevers, and brought the fortified complex to her husband's family. It served Marie's granddaughter of the same name, who was married to Karl I von Nevers , as a widow's residence from 1464. She probably had various changes made to the medieval complex around 1470. This included the modernization of the old donjon, whose arched windows were replaced by the cross-frame windows that are still preserved today and to which a stair tower was added on the courtyard side. In addition, Marie had an elongated logis with a chapel built in the Renaissance style on the north side of the tower .

Through the marriage of Marie's niece Elisabeth to Johann I von Kleve-Mark , the property came into the possession of the Kleve family, and they also use it as a widow's residence for female members of the family. The wife of Elisabeth's grandson Charles de Clèves , Marie d'Albret , lived there after the death of her husband in 1521 and raised her son François I there. The construction of an open gallery on the courtyard side of the west wing goes back to her between 1528 and 1545, with which the transformation of the complex into a castle was completed.

With Henriette de Clèves , who was married to Luigi Gonzaga from 1566 , the facility came to this Italian aristocratic family . She sold the property in August 1605 for 56,000  livres to the first minister of Henry IV , Maximilien de Béthune. He had the Petite Sauldre dammed into an artificial lake next to the castle and a large terrace facing the lake added to the east wing of the castle . He also had a 230  arpents large castle park laid out and surrounded by a wall. Maximilien de Béthune's son François received the French King Louis XIV at the castle on May 6, 1651 , who stopped there on a trip to Bourges.

From the 18th century

Béthune's descendants remained lords of the castle until the French Revolution . In 1808 François Dumont de La Charnage bought the castle. Later it came to the Chevalier d'Almont family, who had the first repairs carried out in 1875. During the Second World War , bombs by German troops hit the facility hard on June 18, 1940. Their roofs were badly damaged and the masonry was cracked. Some of the interior was also damaged. The damage was repaired in a makeshift manner, but the historical substance was not handled properly. In addition, the castle was no longer used after the war and was abandoned. It began to gradually deteriorate.

In 1961 the diplomat Henri Coursier acquired the dilapidated buildings and restored them. His daughter Claude, a married Countess von Ogny, opened the facility to visitors. Her family still owns the castle today. She lives there and maintains a small museum in an outbuilding that commemorates Alain-Fournier and his work. The French writer was born in La Chapelle-d'Angillon in 1886 and processed the memories of his childhood in the novel The Great Meaulnes . In addition, all year round visitors can visit some of the castle's interiors, which include imposing Renaissance chimneys and a work by the Italian sculptor Luca della Robbia . A permanent exhibition, the exhibits of which deal with the 19th century in Albania , is also open to visitors. You can see, among other things, precious, gold-embroidered Albanian robes and old weapons. The collection is based on the friendly relationship between the current lords of the castle and the family of the former Albanian royal family. In addition, every summer a large medieval festival takes place on the entire castle grounds , and some of the castle rooms can be rented for private events such as weddings and receptions.

The complex has a trapezoidal floor plan and, with its three wings, encloses an inner courtyard, which is closed off on its south side by a low wall set with putti . In the past, there were also buildings there that leaned against a defensive wall from the inside . In the north, west and south of the tracts there are dry trenches. The buildings of the complex have masonry made of broken stone or brick and slate-covered roofs. Three of the four corners of the castle are marked by round towers with conical roofs , whose roots go back to the 13th century. The same applies to the outer walls of all building wings, because they used to be the curtain wall of the medieval castle. 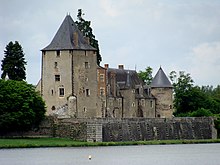 The oldest part of the castle is the square donjon at the southeast corner of the complex. It actually bears its name "Béthune Tower" wrongly, because it was not built by Maximilien de Béthune in the 17th century, but in the 11th or early 12th century. The building, which is provided with corner blocks, is closed off by a high, bent hipped roof and has a stair tower at its northwest corner facing the castle courtyard. This was only added to it in the course of modernization work in the 15th century. During these changes, many of the medieval architectural elements at the donjon were lost. At the base with a side length of 10.70 meters, the walls of the tower are 2.40 meters thick. They offer enough space for stairs in the wall thickness, which connect the individual floors with each other. The wall thickness of the five storeys decreases towards the top, the top of which is younger than the others. Each of them is occupied by a single room, the side length of which is approximately six meters.

The donjon is joined to the north by the 40-meter-long north wing, which is intended for residential purposes, and a castle chapel. On the ground floor of the Logis are the large so-called Gardensaal ( French salle des gardes ) and the former castle kitchen, both of which have a vaulted ceiling . The actual living rooms were on the upper floor, which can be reached via two spiral staircases . The stairs are located in a square stair tower on the courtyard side of the wing and a round tower, which is in front of the eastern outer facade of the wing. There is also the large, 80-meter-long terrace from the 17th century, from which you have a good view of the large castle pond. The castle chapel has only been used as a granary since Maximilien de Béthune bought the castle, but has now returned to its original purpose. A public mass is held there in the mornings every Sunday. The valuable, wooden coffered ceiling of the chapel with the monogram Marie d'Albrets does not belong to the original furnishings from the Renaissance period, but was previously installed in the lodge.

Gatehouse on the north side

Access to the castle buildings is provided by a massive gatehouse with two massive round towers in the middle of the north side, which, like the logis and the chapel, was built in the second half of the 15th century. A stone bridge over the dry moat leads to its segment arched gate, replacing a previously existing drawbridge . The recesses for their seesaw trees in the masonry of the building are still preserved. To the left of the high, double-leaf gate there is a much narrower hatch . In the past, the two round towers of the building were cut at the height of the curtain wall in order to add a continuous upper floor to the building. This can be reached via a narrow, courtyard-side stair tower with a keel arch entrance .

The west side of the castle courtyard is bordered by former farm buildings, the most striking part of which is a long Renaissance gallery based on the Italian model. It was built in the first half of the 16th century as the Jeu de Paume . Most of the seven-arched arcade has been reconstructed, only the two northernmost arches and their supporting columns are original. The shape of the columns, which are composed of two bulbous elements placed one on top of the other and have elaborately carved capitals , is unique in France.