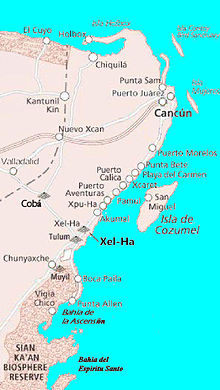 Sian Ka'an is a national park in Mexico . It is located on the east side of the Yucatán Peninsula in the state of Quintana Roo . Its area was designated as a national park and a biosphere reserve by UNESCO in 1986 and has been a World Heritage Site since 1987 . The name Sian Ka'an comes from the Maya language and basically means place where heaven was born .

The national park covers a total area of ​​5,280 km², consisting of tropical rainforest , wetlands , coastal and marine ecosystems . In 1994 a further 1,000 km² was placed under protection south of the reserve. The area there is called the Zone for Flora and Fauna, Uaymil , although it is not part of the UNESCO Biosphere Reserve, although it is directly adjacent.

There are five official and controlled entrances to the reserve. They are located in Pulticub, Santa Teresa, Chumpon, Chunyaxché and Chac Mool. Access controls and management (including park rangers, entrance fees) are the responsibility of the Federal Office for the Environment and Natural Resources (SEMARNAT).

The biosphere reserve lies partly on the limestone table of the Yucatán peninsula and includes parts of the extensive reef system of the Caribbean coast. In the limestone underground there are many cenotes that are filled with fresh water. Parts of the world's longest known underwater cave system, Sistema Ox Bel Ha, are located on the northern edge of Sian Ka'an.

The climate is tropical hot. The Caribbean coast is a major gateway for hurricanes .

Pelican in the hide on prey

A total of 4,000 plant species and 28 mammal species including five cat species, jaguar , puma , Central American tapir and Caribbean manatee were found up to 1999 (status of the UNESCO report) . A wide variety of sea ​​birds and waders can be found in the great variety of aquatic habitats . A rich water world lives in the numerous lagoons , channels, sea bays and coral reefs . It is to be expected that further animal and plant species will be found in the course of the scientific research projects.

Approx. 2,800 km² of the reserve area are designated as the core zones of the protected area. The so-called buffer zones cover the remaining almost 2,500 km²; they create a transition to the surrounding unprotected areas.

The biosphere reserve is largely closed to human settlement. According to UNESCO, there are 800 inhabitants (1999), mostly Maya. They live in the protected area and practice subsistence farming and fishing here. The largest settlement, Punta Allen , a former fishing village, is now a green tourism resort .

The non-governmental organization CeSiaK has maintained an information center with an attached hotel in the north of the reserve since 1998, offers guided tours through the reserve and organizes lectures and educational measures on ecosystems and species protection. Environmental education projects are aimed primarily at elementary school students in nearby Tulum ; the educational program is financed from the tourism income of the information center.

The increasing development of the Mexican Caribbean coast for tourism, which originates from the tourist centers Cancún and Playa del Carmen in the north , exerted great pressure on the protected area, since the biosphere reserve limits the tourist expansion area to the south. Excursions into the reserve are included in tourism strategies as a high-quality leisure offer.

In addition, parts of the Boca Paila peninsula are intended for high-priced sales to private individuals or investors or have already been released, which means an enormous additional anthropogenic burden on the biosphere reserve in the future.

There are around 20 previously discovered archaeological sites in the national park. These are Mayan sites from the 13th to 16th centuries. The most famous of these is Muyil (Chunyaxché). The ruins of Muyil are located approximately 20 km southeast of Tulum. The highway Highway 307 Cancun-Chetumal is built through this archaeological site through.

Muyil was already settled in the Mayan Classic (250 to 900), but the buildings mainly date from the post-classical period (900 to 1500). Similar to Tulum, the ceremonial area was probably surrounded by a wall. The city was probably inhabited until the Spanish conquered the Caribbean around 1550.

About 5 km southeast of the small temple Xlahpak stands not far from the freshwater outlet of the Chunyaxché lagoon. Other sites are on the Boca Paila peninsula, a narrow, long peninsula that delimits the protected area in the northeast from the Caribbean Sea. Halfway along it is interrupted by a 20 m wide tidal channel. At its southern tip is Punta Allen. The name Boca Paila means flat mouth .

With the establishment of the national park in 1986, the Amigos de Sian Ka'an (Friends of Sian Ka'an) were formed, who in the interests of regional development in the state of Quintana Roo, which is largely dependent on tourism, developed modern concepts for the conservation and management of the Sian Ka biosphere reserve 'on and other protected areas on the Caribbean coast, and promoted politically and socially. It works closely with the relevant state authorities, regional and local governments and the tourism- related economy of the Costa Maya .