from Wikipedia, the free encyclopedia
This is the spotted version , flagged on May 19, 2019 . There is 1 pending change that has yet to be viewed.

In 1988, the extension of the U6, which ended in Munich at the Kieferngarten underground station , to Hochbrück was decided by the Garching city council. Since the route there, including the train station, runs on the surface, the shell construction was completed after just over a year. The station finally went into operation on October 28, 1995. Until the opening of the line to the Garching-Forschungszentrum underground station in October 2006, Garching-Hochbrück was the northern terminus of the U6.

The underground station is located on the south-eastern edge of the eponymous district and primarily serves to develop the industrial area located there, which makes up a large part of the Hochbrück settlement area.

To the north, the subways disappear into the tunnel just behind the subway station and after 1,827 meters they reach the Garching stop . In the other direction, the route leads over the Schleissheim Canal and next to the Fröttmaninger Heide to the Fröttmaning underground station , 4208 meters away , which is already in Munich. This section of the route is the longest in the entire Munich underground network without stops. 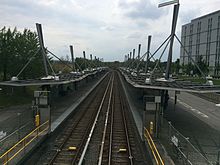 Garching-Hochbrück is one of the few stations on the Munich subway with side platforms. Both platforms are separated from the environment by glass walls and each have one entrance at each end of the platform and one in the middle of the platform. A bridge crosses the tracks to the north and south of the station. 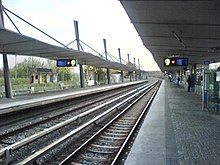 The platforms are paved with cobblestones to protect them from the weather . They are each covered by a striking steel structure. 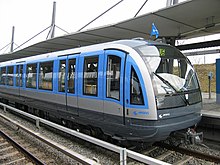 The U6 serves the stop every 20 minutes and every 10 minutes during rush hour.

Several bus lines connect the district from the adjacent bus station. Line 293 leads to the southwest of Hochbrück and via Garching to the Auensiedlung in Munich. Line 290 also leads to Garching. The other bus lines cross the district on their way to Oberschleißheim (line 292), Unterschleißheim (line 219) or to Munich 's Am Hart underground station (line 294). The 695 bus also runs from here to Eching and on to Kirchdorf an der Amper .