Vossnacken (also Vossnacken or earlier Vosnacken) is a rural area outside the city of Velbert in the Mettmann district . It is on the city limits of Essen . The greater part of the former Vossnacken farmers is located in the Langenberg district , while a smaller part is in the west of the Mitte district. In the sense of an independent district, the name Vossnacken is only used today for the outdoor area populated with individual courtyards. The built-up districts of Vossnacken are now always referred to under the names Frohnberg , Hopscheider Berg or Sonnenhang.

At the same time, the Vossnacken is a mountain range that rises from the Ruhr from approx. 55 to 242 meters above sea level. It is listed in the handbook of the natural spatial structure of Germany as a separate natural area with the order number 337 1 .11.

The Vossnacken is still dominated by agriculture on the extensive, flat hilltops. In the middle of the large fields there are groups or hamlets of up to 5 individual farms. The steep slopes of the Kerb- or Siep-valleys are wooded and mainly covered with beeches . There are numerous small-scale cottages here .

Only in the south does the town of Langenberg (Rhineland) extend up the slopes from the historic district of Vosskuhle and form the districts of Frohnberg , Hopscheider Berg and Sonnenhang. Floodplains which were primarily used for pasture farming can only be found in the Deilbachtal.

In addition to other hiking trails, the 230 km long Neanderlandsteig has opened up the Vossnacken since 2004.

The Kaiser-Route runs over the Vossnacken , a long-distance cycle route which is based on the presumed route that the imperial army under Charlemagne took in 775 on his crusade into the Saxon territory.

The tenth district of the Reichsabtei Werden initially did not include the new farmers Vossnacken according to a document from the year 875. However, there is a second document, which, presumably a forgery around 1050, describes the peasantry “Fußnackon” within the Werden district. This testifies to a dispute with the southern lordship of Hardenberg, which also made claims on the Vossnacken. The Vossnacken (word origin probably Fuchsnacken) later belonged completely to the rule Hardenberg , since 1808 municipality Hardenberg, later mayorry Hardenberg-Neviges . However, the Werden abbot secured his influence by exercising the office of wood judge until the Vossnacker Mark was split up in 1790 .

With the division of the Vossnacker Mark , a school building was built in 1789, which was jointly supported by the farmers. The Vossnacker School existed until 1958 at its old location in the middle of the peasantry.

In 1912 the Westfälische Berggewerkschaftskasse built a geomagnetic control room in Bochum on a piece of land behind the school garden . In this control room, the fluctuations of the magnetic needle were automatically recorded. The mining union treasury has entrusted the main teacher with the supervision of the control room.

In 1891 parts of the Vossnacken, together with Dilldorf, were assigned to the municipality of Kupferdreh , now part of the city of Essen , through regional reform . In 1899, further parts were transferred to Langenberg. The final incorporation of the old Vossnacken farmers into Langenberg took place in 1928, with a smaller part to the west coming to Velbert .

During the Second World War, a large anti-aircraft battery was built on the grounds of Gut Pollen , which was part of the Krupp night light system. The area was later used as a military training area for the Ruhrland barracks until it was sold to a farmer again in 2009.

In the early morning of May 28, 1943 at 1:20 am local time, a British four-engined Handley Page Halifax bomber crashed on Vossnacken in the Siepens "In der Wünne" area . The aircraft with the serial number HR807 was involved in an attack on Essen, it belonged to the 405th squadron "Eagle" of the 6th group of the Bomber Command of the Royal Canadian Air Force (RCAF). 4 of the 7 crew members were killed in the crash, the survivors were taken prisoner of war. 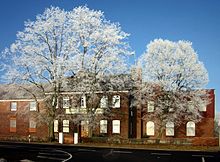 Gut Jägerhaus stands at the highest point of the Vossnacken and is the point of transport.

The main access road is Landesstraße 427 (Kidneyhofer Straße), which follows the ridge as a high road.

A double-track S-Bahn line (S 9), formerly the historic Prinz Wilhelm Railway, has been running through the Deilbachtal since 2003 and connects the cities of Essen in the north and Wuppertal in the south. The breakpoints in Kupferdreh , Leberhof and Langenberg are at the foot of the Vossnacken. The Kidneyhof train station is located west of the Deilbach in the Vossnacken and was therefore not originally located in Kidneyhof / Westphalia, but in the Rhineland.

There are also bus routes to the center of Velbert and to the districts of Langenberg and Kidneyhof .