from Wikipedia, the free encyclopedia
This is the spotted version , flagged on March 19, 2020 . There is 1 pending change that has yet to be viewed.

The Prince William Railway Company (short PWE) was the oldest railway - Aktiengesellschaft on German soil. It was founded in 1828 as the "Deilthaler Railway Company" and was also allowed to call itself "Prince Wilhelm Railway" after the visit of Prince Wilhelm of Prussia on September 20, 1831. On February 14, 1844, the joint-stock company was re-established with a capital of 1.3 million thalers and was now also legally known as the “Prinz-Wilhelm Eisenbahn Gesellschaft”. It remained in existence until February 18, 1863 and was then sold to the " Bergisch-Märkische Eisenbahn-Gesellschaft ". 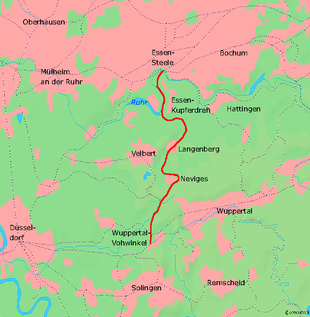 Map of the course of the Prince Wilhelm Railway

From 1844 to 1847, the PWE expanded the route of the “Prince Wilhelm Railway” from Vohwinkel to Überruhr (today districts of Wuppertal and Essen). This first railway line between the Ruhr and Wupper valleys was planned by Friedrich Harkort and is still in operation today (as line S 9 of the Rhine-Ruhr S-Bahn between Haltern and Wuppertal).

Design with two-lane tracks and vehicles

Friedrich Harkort recognized the necessity of transporting hard coal from the Ruhr to the Bergisches Land and to Wuppertal very early on . He therefore found himself in England , the first railway projects and wrote in 1825 in the journal " Hermann " the article "railways. (Railroads.) “He was looking for sponsors and interested parties to realize such a project. In the end, he found these mainly in the collieries on the Ruhr.

In 1826 he had a small test track built, which was designed by the Englishman Henry Robinson Palmer as a monorail suspension track. Together with Bergrat Heintzmann, he presented this railway, which is certainly considered a model for the Wuppertal suspension railway, to the public. On September 9, 1826, the Elberfeld Council discussed two routes for the construction of such a railway from Elberfeld via Uellendahl , Horath and Herzkamp to Hinsbeck an der Ruhr or from Elberfeld via Horath to Langenberg an der Ruhr. From 1826 to 1827 the surveying work for these tracks was carried out.

Another railway pioneer, the grammar school teacher Peter Nikolaus Caspar Egen, favored the construction of a "normal" railroad. While Egen and Harkort were resolving their differences of opinion, and even before an application for a concession had been made, resistance arose from carters and horse drivers, who until then had been in the business of transporting coal. Meanwhile, the city of Barmen became active with its own plans, as it felt disadvantaged by the activities in its neighboring city.

Many people were afraid of such new technical projects and hesitated to invest their money here. The King of Prussia , who ultimately had to approve the matter, was also averse.

In order to even get into business against the opposition of the time, Harkort changed his plans to a "slimmed-down" version. In 1828 he founded together with his brother-in-law, the industrialist Ludwig Mohl, Peter Nikolaus Caspar Egen , the doctor and colliery company Dr. Voss from Steele and the Langenberg merchants Reichmann and Meyberg created the "Deilthaler Eisenbahn-Aktiengesellschaft", the first German railway stock corporation.

The Deilthaler Railway was built in the years 1830 to 1831 , it ran from Unterbyfang , through Hinsbeck an der Ruhr , today part of Essen-Kupferdreh through the Deilbachtal up to Kidneyhof near Langenberg . The original horse-drawn tram connected the Himmelsfürster Erbstolln , the Zeche Prinz Wilhelm (Essen), Zeche Steingatt , Zeche Prinz Friedrich , Zeche Concordia (Essen), Zeche Adler , also known as the "Black Eagle", and the Zeche Victoria in Essen with the coal routes in the south Ruhr valley.

This train was already called the railway because it drove with iron wheels on iron rails . The superstructure was, according to one description of oak sleepers on which two so-called Strasbourg trees were fastened with a length of 3.30 meters with wooden nails. The road trees were covered with a tread made of 40 millimeter thick iron, so according to English nomenclature it was still a plateway . The total distance was one Prussian mile (7,532 meters), the track width initially 820 millimeters .

The railway was built for relay operation. For this purpose, the route was divided into three sections (relays) of 700 rods each and four relay exchanges of 25 rods each . The relay changes for the horse-drawn tram were at the beginning and end of the tram, at the “Kupperdrehe” and at the Deilbachhammer in the Deilbachtal. The horses were changed at these alternative points , so that the horses only had to move the full wagons there and the empty ones back over one section . A total of seven horses were required as draft animals . On the flat stretch of the Ruhr, one or two horses were sufficient for the coal train. Three to four horses had to be harnessed on the uphill stretch to the Kidney Court.

On September 20, 1831, the route was opened by Prince Wilhelm of Prussia , Governor General of the Rhine Province and Westphalia and the youngest brother of King Friedrich Wilhelm III. , solemnly inaugurated. The prince and his family rode the railroad that day in a carpeted coal wagon. Since then, the railway has been allowed to call itself the “Prince Wilhelm Railway”.

Until 1844 the Prinz-Wilhelm-Eisenbahn was operated as a horse-drawn railway to transport coal. After only one year of operation, however, passengers were also transported, especially on the return journey from Kidneyhof to Hinsbeck; because there was no freight volume for these trips. As early as 1833, some passenger cars were available “for pleasure”.

Since the operation of the railway ran to the satisfaction of the shareholders, it was decided in 1840 to expand the railway. On August 23, a letter was sent to the district administrator to support the application for the concession. On June 29, 1844, the Ministry of Finance granted permission to build an extension to Steele in the north and Vohwinkel in the south.

To get the necessary funds, they wanted to issue new shares. To this end, an offer was made to the owners, according to which, together with the purchase of shares, a guarantee of favorable transport prices was made. The mines rejected such an offer. The mistrust was based on the bankruptcy of the Rhein-Weser-Bahn shortly before. Finally the necessary capital was obtained and construction could begin on July 29, 1844.

The railway line was converted to the standard gauge of 1,435 millimeters and lengthened in both directions, dividing it into 81 construction sections with a length of 100 rods each. Under the name “Steele-Vohwinkler Eisenbahn”, the 32-kilometer-long railway line went into operation again on December 1, 1847 as a steam-powered railway line, it now led from Überruhr (south of the Ruhr, opposite Steele ) to Vohwinkel via Kupferdreh , Langenberg and Neviges .

The street turntable in Essen-Überruhr is still reminiscent of the first terminus, located south of the Ruhr in Überruhr (the railway bridge to Steele was only built in 1863). For the return trip the locomotives had to be turned on a turntable.

Takeover of the company

The BME integrated the route into its route network and extended the route beyond the Ruhr to Steele (main station, today Essen-Steele-Ost). The historic building of the old copper turning station , which is no longer used today, dates from the time of the Prussian state railways .

Route of industrial culture - themed route 15: Railways in the district ﻿!