In the Roman Empire , Emperor Constantius II ruled . In the western part of the empire he installed his nephew Julian as Caesar (lower emperor). This now rules over Gaul , Hispania and Britain . After he in his previous reign, the 355 , the Gaul has started threatening Germans has repeatedly defeated, he now closes at Mogontiacum peace treaties with the Alemanni kings Macrian , Hariobaud , Ur , Ursicinus , Vestralp and Vadomar .

In the east, the army masters Ursicinus and Sabinianus have to fight with the Persian King Shapur II , who succeeds in taking the Roman fortress of Amida after a siege of 73 days . The historian Ammianus Marcellinus , who is a soldier in the city and to whom we owe the report of the siege, managed to escape just in time. Constantius appointed the brothers Eusebius and Hypatius as consuls for the year 359 . They probably got this honor through the mediation of their sister Eusebia , the wife of Constantius.

The year 359 falls within the history of China during the Sixteen Kingdoms Period . Emperor Jin Mudi , who belongs to the Eastern Jin Dynasty , rules southern China . Outside the Jin area, however, different kingdoms have established themselves, namely the Former Qin , the Former Liang and the Former Yan under their Emperor Murong Jun . In the Tiefu tribe, which will only form the Xia kingdom in 407 , the tribal leader Liu Weichen replaces his predecessor Liu Xiwuqi . 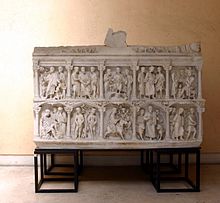