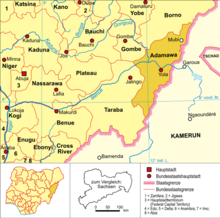 Location of Adamawa in Nigeria

Adamawa is a federal state in the West African country of Nigeria with the capital Yola . The largest city is Jimeta with 248,166 inhabitants (2005). The name is derived from Modibo Adama , the founder of the Emirates Adamaua .

The state is located in the east of the country and borders the state of Borno to the north, the state of Gombe to the northwest , the state of Taraba to the southwest and Cameroon to the east . Across from Numan , the Gongola flows into the largest tributary of the Niger , the Benue .

The population predominantly speaks Adamawa Eastern languages (in the center and in the east) of the Adamawa Ubangi languages and Igbo (in the south) within the Niger-Congo languages , which are also spoken in neighboring Cameroon. English is also spoken as a lingua franca.

Adamawa used to be part of the Emirates Adamaua . The state was formed on February 3, 1976 under the name Gongola from part of the former state of North-Eastern. On August 27, 1991, it was renamed Adamawa.

The majority of the working population in Adamawa is employed in agriculture . The climatic and ecological conditions allow the cultivation of grain , cotton , peanuts , corn , yams , cassava , millet and rice . Fishing and livestock farming are also important industries .