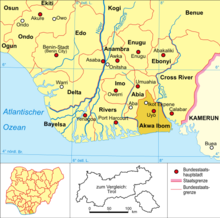 Location of Akwa Ibom in Nigeria

Akwa Ibom is a federal state in the West African country of Nigeria with the capital Uyo , which is also the largest city in the state with around 750,000 inhabitants (2012).

The state was formed on September 23, 1987 from part of the state of Cross River . The first governor was Jonathan Ogbeha between September 1987 and July 1988. The current governor has been Udom Gabriel Emmanuel since 2015 .

Akwa Ibom is endowed with a multitude of mineral resources . These include: crude oil , limestone , clay , natural gas , salt , coal and nitrate . The state is the third largest producer of petroleum in Nigeria. Here is Exxon Mobil's base of operations .

Under the government of the current governor, Dr Goodswill Akpabio, there is an economic upswing in Uyo and Akwa Ibom like hardly any other state in Nigeria. In 2014 there were several major construction projects: international hotel projects, the construction of a football stadium. An international hospital with 500 beds and the expansion of the airport are about to be completed. A deep-sea port is still being planned.

The roads are considered to be the best outside of Abuja and Lagos.

Contrary to much information, Akwa Ibom, especially Uyo, is relatively safe. There have been no violent attacks against foreigners for years. As a stranger or foreigner, you can travel in the larger cities without any security personnel or police (with a driver). Also in Uyo z. B. Shopping in the supermarket or visits to the markets, cinema, etc. possible without problems and accompaniment. During the night, however, overland journeys should only be made with security personnel or MoPol.