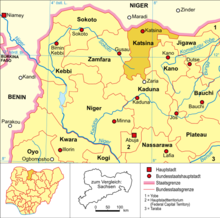 Location of Katsina in Nigeria

Katsina is a federal state in the West African country of Nigeria with the capital of the same name, Katsina , which is also the largest city in the state with 432,179 inhabitants (2005).

Most of the residents of Katsinas State are Sunni Muslims . The Haussa ethnic group (often combined with the Fulani people to form the Hausa-Fulani population ) form the largest ethnic group in the state. Sharia , Islamic law , was officially introduced in the state of Katsina ten years ago .

The state was formed on September 23, 1987 from part of the state of Kaduna . The first governor was Abdullahi Sarki Mukhtar between September 1987 and July 1988. Governor from May 29, 1999 to May 29, 2007 was Umaru Yar'Adua of the liberal-conservative People's Democratic Party (PDP), which was elected President of Nigeria in 2007. The current governor since May 2007 is Ibrahim Schema , also from the PDP.

The agriculture is the main industry in the state of Katsina. There are cotton , peanuts , millet , corn , rice , wheat and vegetables grown.

Of natural resources are among other kaolin and asbestos removed.