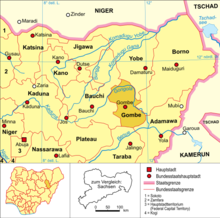 Location of Gombe in Nigeria

Gombe is a federal state in the West African country of Nigeria with the capital Gombe , which is also the largest city in the state with 250,278 inhabitants (2005).

The state of Gombe is mainly populated by the Fulani people, who are occasionally combined with the Haussa to form the Hausa-Fulani population . By far the largest religious community in Gombe are the Sunni Muslims . Therefore, the state recently officially introduced Islamic law, the Sharia , as the source of jurisdiction. However, the Sharia only applies in areas with a majority Muslim population.

An estimated 7.8 percent of the total population in Gombe state is infected with HIV.

The state was formed on October 1, 1996 from part of the state of Bauchi. The first administrator was Joseph I. Oriji between October 7, 1996 and August 1998.

Mohammed Danjuma Goje has been the current governor since May 29, 2003 .

The majority of the working population of Gombe are employed in agriculture . The climatic and ecological conditions allow the cultivation of grain , millet , maize and rice , among other things .