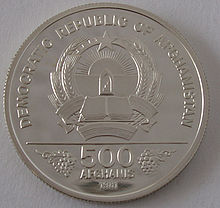 The Afghani ( Pashto :افغانۍ, Persian افغانی) is the currency of Afghanistan .

The Afghani ( ISO-4217 code : AFN) was first introduced in 1926 under the Afghan ruler Amanullah Khan . It replaced the Afghan rupee (روپيه), which had served as currency in Afghanistan for centuries, at an exchange ratio of 11:10.

The population still speaks of rupiah while writing in the accounting language of afghani or afghanigi is used. Afghani or aughan are other names for Pashtun .

A brief interruption in the issue of these denominations took place in 1929 by King Habibullah Kalakâni , who returned to the old currency of Afghanistan.