Albershausen is a municipality in the district of Göppingen in Baden-Württemberg ( Germany ).

Albershausen lies between the lower Filstal and the Swabian Alb on the Butzbach, a small left tributary of the Fils. The village center stretches along the federal highway 297 between Uhingen and Kirchheim unter Teck . The district town of Göppingen is about 7 km east-northeast as the crow flies.

The community of Albershausen can look back on almost 750 years of history. The exact date of foundation is not known. The community is mentioned for the first time in a document from 1275. Neolithic finds suggest that as early as 3000 to 1800 before the birth of Christ people roamed the Albershausen markings and perhaps already settled there. Already around 1700 BC Alemannic grave goods were very likely discovered, but their meaning was not recognized. From these finds we know that around 700 and 800 AD on the mark, probably in the area of ​​the town center, Alemanni settled.

The place name probably refers to a personal name of an Alber or Albheri. The Albershausen parish description from 1828 should therefore be right with its statement, probably taken from the oral tradition at the time, "according to a document without a year, the builder and owner of the first house in the current Albershausen was a certain Johannes Alber" with regard to the name Alber.

The place name was also associated with the field name "Vor Albers Holz" near Schlierbach. This piece of forest, located on the border with Albershausen, west of the Tannengarten, appears in a document in 1484 as Albernholz.

The Schenkenmühle, which belonged to the Filseck and which disappeared during the Thirty Years' War, was once located near Albershausen . It was on Albershausen's marking in the area of ​​the sheep farm. However, through marriage it passed to the owner of the Filseck Castle. A castle is said to have once stood very close to it on the eastern edge of the forest above the Schafhof, of which ruins are said to have existed in 1844. Its location was probably near today's Vollmer nursery. Proof of this are the local field names “Buschel” and “Im Burgstall”. 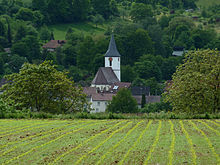 Albershausen Church from the east 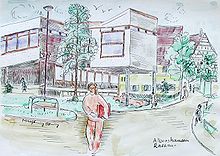 The mayor is elected for an eight-year term. Jochen Bidlingmaier has been Mayor of Albershausen since April 21, 2010. In the election on February 7, 2010, he received 83.3% of the vote.

The municipal council in Albershausen has 14 members. The local elections on May 26, 2019 led to the following result.

The blazon of the municipal coat of arms of Albershausen reads: In silver the green capital letter A, below it a green tulip lying to the left .

The coat of arms of the municipality of Albershausen is the only letter coat of arms in the district of Göppingen . The official seals of the mayor's office and the municipal council used in 1930 contain the capital letter A as a seal image without a shield, including a tulip with two leaves. It is not known when these symbols, from which the letter refers to the place name, were adopted (Wappenbuch des Landkreis Göppingen). However, the coat of arms appeared on landmarks and landmarks before 1930.

On February 3, 1959, the Ministry of the Interior gave the municipality the flag colors green and white.

Evangelical Johanneskirche : A church in Albershausen was first mentioned in 1275. The patronage came to Württemberg through the Wiesensteig Abbey. The Reformation was introduced in 1534. The parish belongs to the Protestant church district of Göppingen . The late Gothic St. John's Church was built around 1455 and renovated in 1701, 1800, 1869–87, 1953 and 1971. It has a ribbed vaulted choir, which housed an organ loft until 1971. The west tower was rebuilt after a fire in 1781. The artist couple Gisela Dreher-Richels and Gerhard Dreher from Weilheim were responsible for the artistic renovation concept and the ornamental choir glazing in 1971/1972 (made by Kunstglaserei Hack in Weilheim).

Albershausen is conveniently located in the district of Göppingen on the federal highway 297 between Stuttgart, Ulm and Kirchheim / Teck. The B 10 can be reached in three minutes, and the A 8 motorway can be reached in less than 15 minutes.

Albershausen is the seat of the school association Westliche Voralb (formerly Werkrealschule, now community school) with a branch in Schlierbach. In addition to Albershausen and Schlierbach, members of the association are the communities of Aichelberg , Hattenhofen and Zell u. A.

A total of around 20 clubs are active in Albershausen. The TSGV Albershausen 1896 e. V. (gymnastics, sports and singing club) is the largest club in town and offers a wide range of sports with 16 departments from American football to table tennis. The Albershausen Crusaders made promotion in 2016 and the GFL2 made it to the second highest division in German American football, in which they compete for the first time in 2017.

Wikisource: Albershausen in the description of the Oberamt Göppingen from 1844  - sources and full texts

Cities and communities in the district of Göppingen