Alfred Joseph Ebenhoch (born May 18, 1855 in Immenstaad on Lake Constance , Überlingen district (church register Dompfarrei Bregenz ); † January 30, 1912 in Vienna ) was an Austrian, Catholic politician of the People's Party , which united with the Christian Social Party in 1907 . 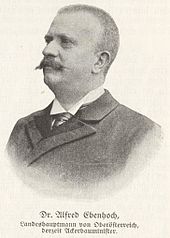 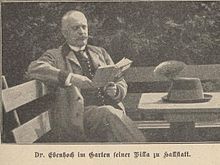 As a private individual

Alfred Joseph Ebenhoch was a son of Christian Gebhard Ebenhoch , an official clerk and freight forwarder in Bregenz on Lake Constance and the wife of his first marriage Franziska Maria Wilhelmine , née Maegerle , and a grandson of the couple Alois Jakob Ebenhoch (1783-1842), blacksmith in Feldkirch in Vorarlberg, and the wife of his second marriage Anna Maria , née Beck (1798–1848). He graduated from the Stella Matutina College of the Order of the Jesuits in Feldkirch, was a student at the Universities of Prague and Innsbruck , where he received his doctorate in law in 1881. During his studies he joined the Catholic student associations Austria Innsbruck and Carolina Graz . He became a lawyer in Linz and a member of the Upper Austrian state parliament. From 1895 to 1907 he was governor of Upper Austria .

During the reign of Max Wladimir von Beck as Prime Minister of the Austro-Hungarian Monarchy , he was Minister of Agriculture in Cisleithanien from November 1907 to November 1908 . The agricultural school system, warmblood breeding in Upper Austria, raising the fodder and viticulture yield in Lower Austria and promoting the training of official veterinarians were among other things. a. to his concerns.

He devoted himself as a journalist and writer to agricultural economic and social issues of the working population, and he also tried his hand at writing on stage.

During his studies he became a member of Teutonia Innsbruck and in 1892 participated in the founding of an Allemannia Linz, from which some of the founders of the Nibelungia Linz came from.