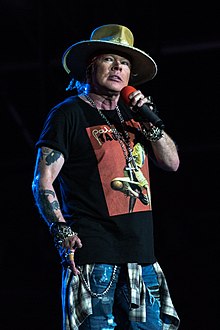 W. Axl Rose (* 6. February 1962 in Lafayette , Indiana as William Bruce Rose Jr. , after his mother married Stephen Bailey William Bruce Bailey ) is an American singer and songwriter . He is the front man of the rock band Guns N 'Roses . Since April 2016 he has been the temporary singer of the Australian hard rock band AC / DC . The Rolling Stone chose him to rank 64 of the top 100 singers of all time . His voice has a very large range (F1 - B ♭ 6).

Rose's father, William Rose, left the family in 1964. His mother later married Stephen Bailey, whose last name he was given without being told that the man was his stepfather. When he found this out himself by chance at the age of 17, he changed his name to W. Axl Rose. "W" stands for "William", after his father, "Axl" was the name of his band at the time. Rose never met his birth father; he was murdered in 1984, which Rose only found out years later. Rose has a sister and a stepbrother.

After finishing school, he followed his school friend and later bandmate Izzy Stradlin to Los Angeles . Stradlin had left Indiana a year before to gain a musical foothold in the metropolis on the US west coast. Numerous fights and stays in sobering cells accompanied Rose through the early days. In 1985 he founded the band Guns N 'Roses with Izzy Stradlin (rhythm guitar), Tracii Guns (lead guitar), Ole Beich (bass) and Rob Gardener (drums) . The formation soon changed, Slash replaced Guns, Duff McKagan joined the band instead of Beich and Steven Adler instead of Gardener. With the album Appetite for Destruction, the band released one of the best-selling albums in rock history. After constantly growing internal tensions in the band, Stradlin later left the band. Adler was fired in 1990 because of massive drug problems. Slash and McKagan officially left the band in 1996 and 1997, respectively, although no activities of the musicians have been followed since 1994. Rose was the only remaining founding member of Guns N 'Roses in the late 1990s.

Axl Rose then disappeared from the public eye. Considered a hermit in the late 1990s, he rarely appeared in public and spent most of his time in his Malibu mansion. For years he worked on the comeback album Chinese Democracy , which hit stores on November 22, 2008.

In 2007 Rose recorded three songs with the former skid row singer Sebastian Bach , which were released in November 2007 on Bach's solo album Angel Down .

Axl Rose was also given the role of radio announcer for the station "K-DST" in the game Grand Theft Auto: San Andreas , in which he was named Tommy "The Nightmare" Smith.

In 2012, Axl Rose was the victim of a theft in Paris, in which three gold and diamond necklaces worth around $ 200,000 were stolen from him.

On April 11, 2012, the Los Angeles Times published a letter from the singer, in which he wrote that he would be refused entry into the Rock and Roll Hall of Fame and boycott the associated celebration on April 14 in Cleveland .

From April 2016, Axl Rose joined AC / DC as a singer for 10 concerts , replacing Brian Johnson , who at that time could no longer perform live because he threatened to lose his hearing. AC / DC continued their initially interrupted Rock Or Bust World Tour with Rose as singer.

Since April 1, 2016, Rose has been on tour with Guns N 'Roses under the motto Not in This Lifetime .

In 1990 Rose married Erin Everly, a daughter of Don Everly who is also about Sweet Child o 'Mine . The marriage, during which Everly miscarried, was annulled after around nine months. Until 1992, Rose was in a relationship with Stephanie Seymour , who can be seen in the video clips for November Rain and Don't Cry, among others. A short time later, the couple separated.