Bergisch Neukirchen is a district of Leverkusen .

Neukirchen was founded in the 9th or 10th century and the first church was built around 1150. Neukirchen was first mentioned in a document in 1223. Politically, the place belonged to the Miselohe office in the Duchy of Berg since 1360 .

Neukirchen as part of the mayor's office in Opladen

In 1555 Neukirchen received its own court. On December 16, 1582, the place professed the Protestant faith. In 1600 the Neukirchen court was merged with the Schlebuscher court. The place was burned down in 1630 during the Thirty Years' War . This was followed by a second documented church building in 1704. In 1781 the church was demolished and the new building in the Bergisch Baroque style began. 1784 was the inauguration of the new, today's Protestant church .

From 1795 to 1807 Neukirchen was occupied by French troops. Until 1807 Neukirchen and Witzhelden were under a common Mairie . Subsequently, Neukirchen belonged to the canton of Opladen in the Düsseldorf arrondissement in the Rhin department. In 1815 the Rheinische Krautfabrik was founded ; in the same year the Rhineland and with it Neukirchen came to the Kingdom of Prussia . Initially the place belonged to the district of Opladen and since 1819 to the district of Solingen . In 1820, the municipality of Neukirchen was added to the division of the Witzhelden mayor to the Opladen mayor. In 1851 the separation from Opladen took place; Neukirchen became an independent municipality.

On August 24, 1857 Neukirchen received city ​​rights . In 1881 Neukirchen was connected to the railway network by the Opladen – Lennep railway line. The station was built in 1901.

To avoid confusion in the future, Neukirchen was renamed Bergisch-Neukirchen . In 1909 the church tower was raised and an onion hood was put on. In 1910 the screw manufacturer Max Tillmanns founded "Tillmanns Park", which has been owned by the city since 1988. 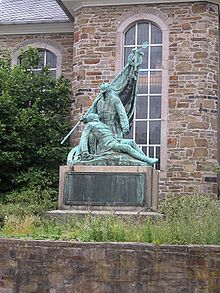 War memorial at the Protestant church

In 1911 Albert Römer donated the war memorial for those who fell in the wars of unification in 1866 and 1870/71. The memorial was created according to a design by the Charlottenburg sculptor Arnold Künne and erected in front of the Protestant church.

In 1964 the name of the town Bergisch-Neukirchen was changed to Bergisch Neukirchen .

On March 16, 1960, the Catholic parish "Holy Three Kings of Bergisch Neukirchen" is established in the association of the parish Pattscheid, St. Engelbert. The new community consists of parts of the previous communities in Pattscheid, Lützenkirchen, Quettingen and Opladen. With effect from May 15, 1963, the rectorate is elevated to an independent rectorate parish. The first pastor was Arnold Zimmermann, who was also pastor in Pattscheid. Services initially took place in the hall of Tillmann's restaurant that was rented for this purpose. On June 6, 1971 the Catholic Church of the Three Wise Men was consecrated.

From 1979 to 1984 the Protestant church and the tower were restored.

On May 31, 1992, the rail bus made its last run on the railway line. The line has been partially dismantled, but the former course can still be seen on the railway line. There are also old underpasses on the embankment. But the route has grown over a lot. According to a plan by the Association of Friends and Patrons of Balkantrasse e. V. a bicycle path is to be built on the Balkan Terrace. But the city of Leverkusen is not yet taking part in this construction project.

The project was subsequently completed. This was done privately financed and supported by the Association of Friends and Patrons of Balkantrasse Leverkusen e. V. The route was developed through donation campaigns and membership fees. Around 400,000 euros were raised. To this end, the development association committed itself to the city of Leverkusen for the maintenance and care of the entire property for the next 20 years.

On May 29, 2014, the Balkan Terrace was opened as a panorama bike path hiking trail. The Balkantrasse can thus be used as a cycle path from Leverkusen-Opladen to Remscheid-Lennep.

At the end of 2017, 31.2% of the population were Protestant Christians, 31.0% Catholics and 37.8% were non-denominational or had another denomination or religion.

Pastor of the Protestant parish

The mayor of Bergisch Neukirchen

The bus routes 239, 240, 251, 253 and 258 connect Bergisch Neukirchen with Leverkusen Mitte, the Chempark , Hitdorf, Opladen, Burscheid, Hilgen and Leichlingen. The next train station is Opladen on the Cologne – Wuppertal line . Bergisch Neukirchen used to be on the Wuppertal-Oberbarmen-Opladen railway line .