The title of this article is ambiguous. Further meanings are listed under Schlebusch (disambiguation) .

The district is located in the southeast of the city and borders on Steinbüchel , Alkenrath , Manfort , Bergisch Gladbach - Schildgen and Cologne-Dünnwald . The two residential areas of Waldsiedlung and Leimbacher Berg as well as the rural villages of Edelrath and Neuenhaus, Hummelsheim and Uppersberg also belong to Schlebusch . A new housing estate is being built on the site known as "Bullenwiese".

Mayor's office Schlebusch (right) around 1820. The borders of Schlebusch remained largely unchanged until 1929.

Schlebusch pedestrian zone; in the background the church of St Andreas

Every year on the Corpus Christi weekend there is a large shooting festival and folk festival in Wuppermannpark, on the market square and on Schützenplatz. On Carnival Saturday, the “Schull- un Veedelzoch” travels through the district.

The men's singing association Loreley-Schlebusch e. V. is known for concert tours beyond local borders. With his concerts he strengthens the social life in Schlebusch.

In spring 2005 the Freudenthaler Sensenhammer industrial museum was opened in the former HP Kuhlmann Söhne scythe factory. The sponsor of the "living" industrial museum is the Freudenthaler Sensenhammer e. V. In the permanent exhibition, the most important steps in scythe manufacture are explained at original workplaces; there are also regular special exhibitions. Concerts, theater evenings and other cultural events take place in the forge hall.

Schlebusch can be reached via the Leverkusen junction on federal motorway 3 . Furthermore, the state road 188 runs right through Schlebusch, which represents the 2014 stepped area of ​​the federal road 51 ( Bremen - Cologne - Saarland ) and on which the bus line 260 also runs from Remscheid via Schlebusch to Cologne-Deutz and Cologne main station.

The district is close to the Gruiten – Köln-Deutz railway line . The station, designated by Deutsche Bahn AG as Leverkusen-Schlebusch , is served by the RB48 line. However, the train station is in Manfort. There are historical reasons for this: As the Manfort district did not yet exist when the station was built, the name of the nearest town was used. Attempts to rename the station have so far failed due to the costs involved.

Schlebusch station is served by the RB48 line in the SPNV. This is operated by the British company National Express .

You can change to the following lines of the Verkehrsverbund Rhein-Sieg .

Line 4 of the Kölner Verkehrs-Betriebe ends at the Schlebusch stop on the edge of the Waldsiedlung in Cologne's urban area, directly on the city limits between Leverkusen-Schlebusch and Cologne-Dünnwald. The Cologne city tariff therefore already applies to journeys from Schlebusch. From 1928 to 1958, this line ran as a suburban line (line S) to Reuterstraße in Schlebusch. The line was built by Mülheimer Kleinbahnen AG. 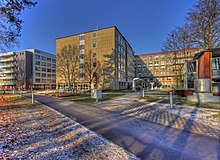 The Freiherr-vom-Stein-Gymnasium, the comprehensive school Schlebusch as well as various elementary schools and kindergartens are located in Schlebusch.