In addition to the church village, the area of ​​the Witzhelden district includes several residential areas and suburbs :

The former municipality of Witzhelden has been part of Leichlingen since January 1st, 1975. The place was first mentioned on October 11, 1184. In the handbook of the historical sites of Germany, North Rhine-Westphalia, Volume 274 (Alfred Kröner-Verlag) it says: “The church Henricus (tower 12th century, nave 1768/69) of Witzhelden first documented in 1184 is mentioned in 1235. With the tithe it was subordinate to the St. Gereonsstift in Cologne . The parish of Witzhelden had its own district court during the time of the county and the duchy of Berg and belonged to the Miselohe office . The Lutheran creed has prevailed since 1560. The Counts and Dukes of Berg owned significant property in Witzhelden, which was combined in the Oberhof "Zum Eichen" and belonged to the winery at Burg Castle . "

“The village of Flamerscheid is considered to be one of the oldest Witzheroes settlements. After 1150 it is said to have belonged to a noble von Hemmersbach who donated the property to the Cistercian monastery Hemmerod on the central Moselle . Pope Lucius III confirmed the ownership of the monastery with a bull from 1184 in which the village was named 'Withseleden' (Vito's or Wittrich's apartment). "

The original of the certificate can be found in the Koblenz State Main Archive (inventory 96, no. 27). In this Latin written bull from Pope Lucius III. is it [called:

“An estate belonging to the noble von Hemmersbach, located across the Rhine. It is mentioned near the village of Withseleden with every right, which means that it will own it. "

Until 1974, Witzhelden was an independent municipality in what was then the Rhein-Wupper district . On January 1, 1975, it was incorporated into the city of Leichlingen (Rhineland).

1184 the place name is Withseleden , 1363 Wytselden . The first syllable with is formed from the Middle High German wede , wide , widu or wite , an old word for wood or wood , as can still be found in the bird name hoopoe , the “wood hopper”. The part of the name seleden has changed through syncope over the centuries to selden and then to hero and means settlement . Witzhelden can therefore be translated as a forest settlement . 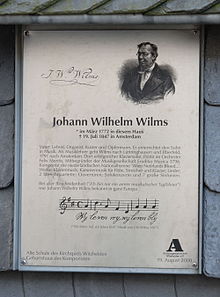 The Evangelical village church is located on the market square of Witzhelden and is one of the most important trademarks of the village. It is a peasant baroque church and it has been documented since 1184. The nave was extensively restored between 1917 and 1982.

There is a Deutsche Telekom transmitter in Witzhelden:

Other personalities associated with the place