Manrique grew up in Puerto Naos, the old port of Arrecife, near the San Ginés lagoon, as the son of the sales representative Gumersindo Manrique and his wife Francisca Cabrera . He had three siblings, his brother Carlos , his sister Juana and his twin sister Amparo . Manrique attended school in Lanzarote. During the Spanish Civil War (July 1936 to April 1939) he fought as a volunteer on the side of the right-wing putschist Francisco Franco . He later completed a degree in civil engineering at the University of La Laguna in Tenerife . He got to know the works of Pablo Picasso , Henri Matisse and Georges Braque at an early age through magazines that his father brought back from business trips . Manrique spent the summer holidays with the family in the northwest of Lanzarote in Caleta de Famara , a small fishing village. The steep coast there and the rapidly changing weather conditions with their changing play of colors on the rocks impressed him in his youth. In 1942, at the age of 23, he had his first exhibition as an artist in Arrecife.

From 1945 he attended the Art Academy in Madrid , from which he graduated in 1950 with the master's degree in drawing and painting. In Madrid he met Pepi Gómez, with whom he had a close relationship for over 18 years until she died of cancer in 1963 .

Together with other like-minded artists, Manrique developed into a pioneer of avant-garde art and in 1954 opened Spain's first gallery for non-figurative art Fernando Fé in Madrid .

After the death of his lover, Manrique got into a creative crisis. In 1964 he used a grant from the International Institute of Art Education to study American art; in New York he was represented exclusively by the Catherine Viviano Gallery with three solo exhibitions. The encounter with Abstract Expressionism , represented by the artists Jackson Pollock and Mark Rothko , as well as with Pop Art ( Andy Warhol , Robert Rauschenberg ), New Sculpture ( César , John Chamberlain ) and Kinetic Art was of great importance for the Development of his work.

In 1968 he finally returned to Lanzarote and decided to transform his home island into one of the most beautiful places in the world. For this plan he was able to win over Pepín Ramírez Cerdá, an old friend of the family who was now president of the island government. The plan included only allowing the traditional construction of Lanzarote, foregoing more than two-story structures and removing all advertising posters from the streets of the island. In 1968 the government issued a ban on the accumulation of advertisements. Manrique drove across the island himself to convince the population of the Lanzarote architectural style. In the same year, the Monumento del Campesino was built at the main Mozaga / San Bartolomé intersection , made of whitewashed old drinking water cans from disused fishing boats. Together with the artist and friend Luis Ibañez, he bought an old house in Yaiza , one of three that remained standing after the volcanic eruptions from 1730 to 1736. After initial plans to use the house as a studio , he converted it into the La Era restaurant in 1970 .

On a trip to Tahíche in 1970, Manrique discovered a fig tree , the green tip of which protruded from a solidified black lava flow . He decided to build his house at this point. The owners of the land did not want payment because they thought it was worthless, and even asked Manrique to take as much land as he needed. While building the house, the artist discovered a total of five lava caves, which he expanded and redesigned into various living spaces. His foundation was established here in 1982. In 1974 Manrique opened the El Almacén multi-purpose cultural center in Arrecife as an international meeting place for those interested in art. The art gallery El Aljibe should give artists the opportunity to exhibit their works for the first time in Lanzarote. In 1988 Manrique moved into a farmhouse in Haría that he had rebuilt and which has been a museum since 2013.

On September 25, 1992, Manrique was killed in a self-inflicted traffic accident about 45 meters from his foundation in Tahíche. At the scene of the accident there is now a roundabout with the Tahíche greyhound created by Manrique. Manrique was buried in the cemetery of Haría with a large participation of the population.

Manrique was responsible for ensuring that mass tourism on Lanzarote was moderate. He worked to preserve and maintain the scenic and cultural identity of his home island, which is why the island government posthumously declared him the island's preferred son in September 1995 , expressing its gratitude for the artist's lifetime achievement. At the same time, the island government committed itself to continue on Manrique's path in the future. Lanzarote was declared a Biosphere Reserve by UNESCO in 1993 because of its commitment to sustainable tourism .

Entrance and building of the Fundación César Manrique

The Fundación César Manrique was founded by Manrique and a group of friends in 1982 and was officially inaugurated in March 1992. The Fundación is a private, cultural foundation that is financially self-supporting, does not pursue a profit-making purpose, and was created from the mandate of promoting and disseminating artistic activity and its natural and cultural environment. In order to meet its goals, the Manrique Foundation develops exchange programs in the fields of art, environment and culture. The foundation is not only intended as a forum for exhibitions, but also for studies and debates. She is concerned with the preservation, research and dissemination of Manrique's work.

Today the foundation is housed in the artist's house and in the associated farm buildings. The entire complex was redesigned by Manrique himself in order to adapt it to its new function as a museum.

Manrique understood art as a close, harmonious connection between man and nature. The association of piles of ash and rubble , which many tourists associate with the barreness of the volcanic island of Lanzarote, has displeased Manrique throughout his life. He felt his homeland as a wild and lively natural beauty that he wanted to transform into a special tourist attraction. Manrique designed several tourist attractions for Lanzarote and neighboring islands, including viewing platforms, gardens, restoring degraded areas and renewing the coastline.

The main feature of his architectural art is the integration of rocks, stone and solidified lava flows into a harmonious living space. He often used the unprocessed natural materials in contrast to round, soft, hand-made shapes. Often the colors black and gray (lava rock) and white (lime and lacquer) can be found. The atmosphere of these art rooms is usually accompanied by sensual, meditative music. Outside the rooms, Manrique had large wind chimes built, also on traffic islands , which the trade winds move.

Manrique saw himself first as a painter. He is credited with a pioneering role in the Spanish abstract art movement , and he is seen as a pioneer of surrealism . The simplicity and clarity of his paintings as well as his architectural works take up the symbiosis of man and nature and illustrate the natural beauties in a wide variety of ways. He left nature as it was and only tried to artistically frame its beauty in order to highlight it so that other people would enjoy it. The quote from Manrique To draw with absolute freedom, without fears and recipes, comforts the soul and opens a way for the joy of living , illustrates his joie de vivre and his attitude of uncompromisingly living and implementing what he thought. 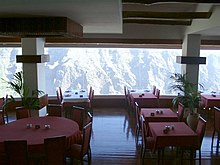 Restaurant of the Mirador del Palmerejeo on La Gomera

In the 1979 ZDF series Timm Thaler , which made Thomas Ohrner a child star, the infernal domicile of the baron (played by Horst Frank ) is presented in a combination of three works of art by Manrique: Hotel Melia Salinas in Costa Teguise , Mirador del Río and Jameos del Agua .

Wikivoyage: In the footsteps of César Manrique  - travel guide