Casey Austin "Case" Keenum (* 17th February 1988 in Brownwood , Texas ) is an American American football poker players at the position of quarterback . He is currently under contract with the Cleveland Browns in the National Football League (NFL). He previously played for the Houston Texans , the St. Louis and Los Angeles Rams , the Minnesota Vikings , the Denver Broncos and the Washington Redskins .

Keenum played football at high school in Abilene in Texas . He came as a quarterback a total of 6,783 yards and 48 touchdowns .

From 2007 to 2011, Keenum played college football . He attended the University of Houston and played there for the Houston Cougars in the  Conference USA .
In total, he came to 1,546 successful passes in 2,229 pass attempts and 19,217 yards and 155 thrown touchdowns in the five years .

Keenum was not drafted in the 2012 NFL Draft , but still signed a contract with the Houston Texans to spend the entire season in their practice squad .

In the 2013 season , Keenum was part of the active squad for the Houston Texans . On the 7th day of the season, Keenum started for the Texans as a quarterback when the actual starting player Matt Schaub injured himself. Keenum was able to throw a touchdown on teammate DeAndre Hopkins in his first official regular season game in the NFL . Keenum started all remaining games of the season.

After the end of the season, he was released by the Texans just before the start of the next one.

At the beginning of the 2014 season , Keenum was signed by the St. Louis Rams . However, he was transferred to the Practice Squad early in the season without having previously been used for the Rams.

Towards the end of the season, on December 15, 2014, the Houston Texans brought Keenum back directly from the Rams Practice Squad. He was used this season for the Texans and was able to book his first NFL win against the Baltimore Ravens .

On March 11, 2015, Keenum was transferred back from the Texans to the St. Louis Rams in exchange for a pick from the 7th round of the 2016 NFL Draft.
During the current 2015 season , Keenum was named the Rams' starting player on Matchday 11.

Keenum moved to Los Angeles with the Rams franchise and went into the 2016 season as a starting player . During the season, however, he had to make way for rookie and first-round pick Jared Goff on November 15, 2016 , so he was allowed to leave the Rams after the end of the season. 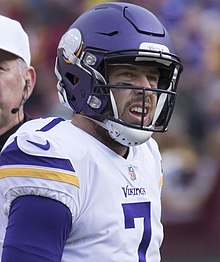 Prior to the 2017 season , Keenum signed a one-year contract with a $ 2 million salary with the Minnesota Vikings . He was brought in as a backup quarterback.

After starting quarterback Sam Bradford was injured at the beginning of the season and long-term injured quarterback Teddy Bridgewater was not available, Keenum was appointed starting player. He started in 14 of 15 games in the regular season and showed excellent performances. He was able to reach the play-offs with the Vikings and remained starting player even at the time when the other quarterbacks, previously listed in front of him, were fit and ready again.

Due to the good performance of the Vikings, they started the NFL play-offs 2017 as the second best team directly in the Divisional Round . There they played against the New Orleans Saints and won the game known as the Minneapolis Miracle through a spectacular last-minute touchdown from Keenum to wide receiver Stefon Diggs . The game was Keenum's first play-off win in his first ever play-off game as a starting player. In the NFC Championship Game he lost with the Vikings to the eventual Super Bowl winner, the Philadelphia Eagles , with a clear 7:38. Keenum threw a touchdown and two interceptions and, like the rest of the team, performed poorly.

On March 14, 2018, Keenum signed a two-year deal with the Denver Broncos . After Keenum could not meet the expectations placed in him and the Broncos missed the play-offs, he was replaced after only one season by Joe Flacco , who came from the Baltimore Ravens , as starting quarterback.

The Broncos gave Keenum for the 2019 season together with a seven-round pick against a six-round pick to the Washington Redskins , who were looking for a new quarterback due to the injury-related loss of Alex Smith . Keenum started the season as the Redskins' starting quarterback. After the Redskins lost their first three games, Keenum was substituted for the rookie Dwayne Haskins during the fourth game, despite average personal performance . After Keenum had to pause in week 5 due to a foot injury, he returned as a starter on matchday six. In week 8 he was substituted for the Minnesota Vikings because of a concussion, so Haskins took over again and after week 9 was named as the starter for the remainder of the season. Due to an ankle injury by Haskins, Keenum was substituted on in the third quarter on matchday 16 and played the last game of the season from the start. Keenum started eight games for the Redskins, seven of which they lost. He finished the season with 11 touchdowns at 5 interceptions, 1,707 passing yards, a passing rate of 64.8% and a quarterback rating of 91.3.

For the 2020 season , Keenum agreed on a three-year $ 18 million deal with the Cleveland Browns , where he will act as a backup for Baker Mayfield .