The triangular fat spider or heat-loving orb spider ( Steatoda triangulosa ) is a spider in the crested web spider family ( Theridiidae ). The species is also known as the brown widow , but should not be confused with the brown widow ( L. geometricus ) of the same name, which belongs to the true widow genus ( Latrodectus ) within the same family. The triangular fat spider, originally only distributed in the Palaearctic , was found in America and on the island of St. Helena and on theCanary Islands and seems to be spreading in Europe at the moment.

The female of the triangle fat spider reaches a body length of 3.5 to 8.6 and the male of 3.5 to 5 millimeters. The basic physique of the species corresponds to that of other fat spiders ( Steatoda ).

The legs are pale brown in the female and orange in the male. The femora (thighs) and tibiae (splints) are faintly darkly ringed. The legs may also be darkened distally (away from the center of the body).

The opisthosoma (abdomen) is strongly arched. Its coloring ranges from reddish to almost black. Most often it is colored dark brown. In contrast to the prosoma, the opisthosoma is strikingly patterned. The markings are composed of lateral (lateral) bands and a median (middle) longitudinal row of diamond-shaped spots. Fine, net-like and dark lines run through all the drawing elements. These stand in stark contrast to the otherwise rather inconspicuous coloring of the spider and thus give it a characteristic appearance. However, since the expression of the character elements varies greatly, individuals of the triangle fat spider can appear both very light and very dark.

The conductor (head) of a single bulb (male sex organ) is long compared to that of other steatoda spiders and is also curved. In addition, in the male, the tibia of each pedipalp (converted extremity in the head area) is longer than the cymbium (frontmost sclerite or hard part of the globe). The epigyne (female sex organ) is characterized within the genus by its small and rounded appearance.

Differentiation from other fat spiders 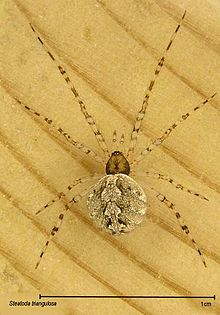 Size comparison of a female found in a garage in the Dutch town of Kampen in 2005 .

The triangle fat spider has a large distribution area, which extends from Europe to Turkey , Caucasus , Russia (Europe to the Far East ), Kazakhstan and Iran to Central Asia , among other places . The species has also been introduced to Canada , the United States and the Canary Islands . In addition, occurrences of the species from the island of St. Helena and South America are known.

In Europe itself, the triangle fat spider is also widespread and has so far only been found in continental Europe in Finland , Sweden , Norway , Estonia , the western European part of Russia, Lithuania , Kaliningrad Oblast , Belarus and the Republic of Moldova and elsewhere on the Franz-Josef archipelago -Land and Spitsbergen of the Russian double island Novaya Zemlya , Iceland and the island of Ireland not detected. In the Caucasus, evidence of the spider from Armenia is lacking . In Europe, the triangle fat spider shows tendencies to spread. However, it is not considered an invasive species, since the spider is native to Europe anyway.

The populations of the triangle fat spider in Great Britain are probably also due to introductions. Here the species is mainly found in areas of southern England that are heavily populated by humans .

Female in a building found in the municipality of Segonzano in northern Italy . 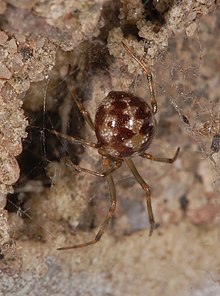 Female found in 2007 in the Nied district of Frankfurt am Main .

The abundance of the triangle fat spider varies by geographic location due to its preference for the habitats it adopts. The species is therefore more common in southern Europe, while it has so far been rather rare in central Europe. In Germany , however, the spider is more common in warmer areas, including the Main area and the Upper Rhine area. To the north, the triangle fat spider becomes much rarer. Nevertheless, the species is probably spreading in Germany as a result of global warming and is becoming increasingly common in the country. The spider has been established in Germany since 1937 at the earliest. In North America, the triangle fat spider is now also frequently found in human settlements, while it is rarely found in South America.

The threat to the existence of the triangular fat spider is also assessed differently depending on the country and region. In the red list of endangered animals, plants and fungi in Germany or the red list and total species list of spiders in Germany (2016), the stocks of the species are not assessed. In the previous version of the Red List, the species was still considered endangered. However, the reasons for the change of category in the subsequent Red List cannot be determined.

Like all crested web spiders (Theridiidae), the triangle fat spider is nocturnal and creates a crested web that is common for the family and gives it its name . This is used by the predatory species, like all spiders , to acquire prey.

Hunting behavior and range of prey

female in his fishing net

Like all spiders that use a spider web to catch prey , the triangle fat spider is an ambush hunter . The web of the species is particularly popular with individuals of this species in and on buildings in corners of rooms, under ceiling areas and in niches of windows, while in the open air the undersides of stones are popular web building sites for the spider. In terms of the basic type, it corresponds to the irregularly laid out hood web typical of hooded web spiders (Theridiidae). The construct is very similar to the net of the common fat spider ( S. bipunctata ), which belongs to the same genus , but is especially designed for catching ground-dwelling insects .

The way of hunting also corresponds to that of other members of this family. The triangular fat spider waits in its web for any prey. If one gets caught in the web, the spider goes to the prey and wraps it in spider silk from a safe distance . The comb-like formations of serrated bristles on the fourth pair of legs, which are usual for crested web spiders, are also used in the triangular fat spider, which serve to form sticky silk for weaving in prey objects. If the prey is sufficiently immobilized, the spider goes straight to it and gives it a venomous bite , which prevents it from escaping and fighting back.

The triangle fat spider is basically an opportunistic hunter with no specialized food spectrum. According to the net designed for catching ground-dwelling arthropods , such species in particular are increasingly being caught. Common prey items include mosquitoes , younger isopods, and brush-footed insects, as well as other spiders. Comparatively large and strong representatives of the latter group, such as angle spiders or trapdoor spiders , are also preyed on by the triangle fat spider. Ants are particularly common, however .

The life cycle corresponds in principle to that of other fat spiders ( Steatoda ). The phenology (period of activity) of adult individuals is between April and December for females and somewhat shorter between May and December for males.

The pairing seems from early spring to late autumn to take place in the triangle-fat spider. Females of the species with egg cocoons can also be found during the same period . A female can produce several cocoons, which are then often deposited close together in niches and corners in buildings. A single cocoon is teardrop-shaped and about the same size as its maker. It contains about 30 eggs that shine through the loose webbing of the cocoon.

The system of the triangular fat spider has undergone several changes. The species name triangulosa is a modification of the Latin adjective triangulos , which translated means "triangular". He points to the yellowish markings appearing in triangles on the spider's opisthosoma. The German-language trivial name of the species also comes from this property.

The triangular fat spider was considered to belong to the genus Aranea during its first description in 1802 by the author Charles Athanase Walckenaer, like all spider species at the time , and was given the designation A. triangulosa . The species was first transferred to the genus of fat spiders ( Steatoda ) under the designation S. venustissima in 1850 by Carl Ludwig Koch . The name S. triangulosa , which is common today , was first used in 1873 by Tamerlan Thorell . Since Joon Namkung's use of the term in 1964, this term has been used consistently for the triangle fat spider.

3 former species were synonymous with the triangular fat spider and thus lost their species status. These types were:

In addition to the nonimate form S. t. triangulosa there is also the subspecies S. t. concolor of the triangle fat spider, which was first described in 1933 by Lodovico di Caporiacco . However, this subspecies is considered a Species inquirenda (Phantomart), so its status is in doubt.

The triangle fat spider as a possible beneficial

A benefit in the context of biological pest control is seen in the triangular fat spider , since the prey spectrum of the species also includes pests such as ticks or possibly woodlice (Armadillidiidae). In addition, the spider is said to be an important predator (predator) of the red fire ant (Solenopsis invicta), which can damage electrical equipment if infested. The spider species Loxosceles reclusa , which is potentially dangerous for humans , can possibly be kept away from buildings by the triangular fat spider, as it is also a common prey of the triangular fat spider.