Evangelical Church (Jünkerath) from the southeast 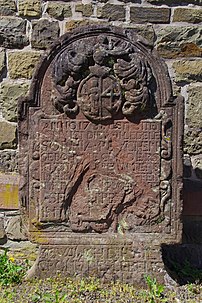 After the Reformation could not prevail in the Eifel , the first Protestant Christians came here when the Rhineland came under the sovereignty of Prussia . In 1821 the community of Prüm was formed, to which the Evangelicals from Gerolstein and Jünkerath were also assigned. The Birresborn , Jünkerath, Hillesheim , Gerolstein area soon felt like a separate area and soon formed a church committee . In addition to Prussian officials, the Evangelicals in Jünkerath were mainly employees and workers of the Jünkerater hut .

A parish vicariate was set up in 1882 under the supervision of the parish office of Prüm. The first church was built in 1894–1895 and consecrated on August 26, 1895. This is a small quarry stone hall and was built by the renowned architects' office ( Schreiterer & Below ) from Cologne . It was financed through donations from community members and the support of the Gustav-Adolf-Verein des Kommerzienrat Poensgen from Düsseldorf , the owner of the Jünkerath iron and steel works.

Since 1899, the church property could also be used as a burial place . As early as 1896, the hut director, who had close ties to the church, was buried next to the church. His grave has been preserved to this day. Later, the tombstone of Sophia Peuchen, crowned and decorated with a coat of arms, was erected in the churchyard from 1738.

In January 1921 the church was repaired and the cemetery fenced in. In 1932 the church got a new coat of paint and a power connection for the interior lighting. In 1944 the church was destroyed by the effects of the war, with the exception of the portal , the (albeit heavily damaged) tower and the foundation walls .

On August 14, 1950, a Church Reconstruction Committee was formed. The construction plans were drawn up by the architect Werner Geyer from Mechernich , who also took over the construction management. The construction was carried out by companies from Jünkerath and the surrounding area. The foundation stone was laid on August 13, 1950, and on March 4, 1951, the President of the Evangelical Church in the Rhineland Heinrich Held consecrated the church.

A first reconstruction took place in 1962. The church received an organ , oil heating , the gallery has been expanded, and a porch and a sacristy were installed. In 1982 the church construction showed further damage. The pressure of the water masses in Schüllener mountain one was draining needed. Furthermore, underfloor heating was installed.

A service takes place in the church approximately every three weeks.