The Protestant Church in Saarburg from the southeast 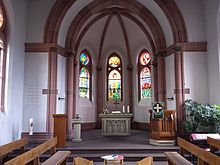 View inside the church

The stained glass windows in the choir

At night from the east

The Evangelical Church of Saarburg is a church of the Protestant parish in Saarburg , Rhineland-Palatinate , district of Trier-Saarburg . It was built at the end of the 19th century for the diaspora congregation , which has since grown to 1,800 members due to the continuous influx of people into the previously purely Catholic area , and is still its spiritual center today.

The church building, which was completed in 1893 in the historicist style , is, like the neighboring rectory, a listed building and is listed in the register of cultural monuments of the Trier-Saarburg district. Despite severe damage in the Second World War, the structure of the church is largely that of the time it was built. The altar and the pulpit have been preserved from the original furnishings .

Today the glass windows by the Trier artist Werner Persy are the main attraction of the church.

On the middle Saar from 1575 by the brothers Philipp III. and Albrecht von Nassau-Weilburg introduced the evangelical creed in 1575. The county of Nassau-Saarbrücken, which had its centers in the cities of Saarbrücken, Ottweiler and Saar Werden, organized its own regional church. With the Congress of Vienna (1815), this fell like the entire state of the central Saar to Prussia and was incorporated into the Rhine Province . Under canon law it became part of the Rhenish regional church. The responsibility for new evangelical citizens in the previously purely Catholic areas of the central and lower Saar rests with the parish of Völklingen . Churches were founded first in Saarlouis , later in Mettlach and finally in Saarburg. The influx of Protestant residents into the newly established Merzig and Saarburg districts began in the first half of the 19th century. These Protestant residents were initially mainly Prussian administrative officials .

Foundation of the parish and church building 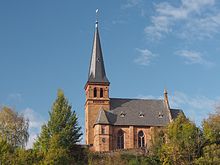 The church seen from the city side (from the west)

The establishment of an independent parish in Merzig, to which the evangelical residents of Saarburg were also assigned, took place in 1851. In the absence of a separate church in Saarburg, the services initially took place in the hall of the district court . It was not until 1893 that an own Protestant church was inaugurated in Saarburg, which was built according to plans by the government architect Natorp ( Bad Oldesloe ). The foundation stone was laid on May 8, 1892, and the inauguration took place on July 11, 1893. The locally responsible district architect Heudler was responsible for the construction management . Almost at the same time, the following Protestant churches were built in the area under similar conditions: The Evangelical Church in Konz-Karthaus , the Evangelical Church in Hermeskeil and the Evangelical Church in Wittlich.

Effective April 1, 1895, Saarburg was separated from the mother parish of Merzig and was raised to an independent parish, which, however, due to its low financial strength, could only employ one vicar until the turn of the century .

In the period after the National Socialist seizure of power , tensions arose and ultimately a break between Pastor Degen and the presbytery . Pastor Degen had joined the Pastors' Emergency League and was also close to the Confessing Church . In contrast, the presbytery was loyal to the German Church, which was ruled by National Socialist ideology . The turbulence peaked in 1935. Several members of the presbytery resigned from their offices. When collecting signatures, over 90% of the congregation stood behind the pastor and against the presbytery. The presbyter and church master Würzner was removed from office on May 7, 1935 by the district synodal committee, reinstated on July 20 by the legal committee of the church province and again removed from the presbytery on May 15, 1937 by the district church committee.

Tired of the constant arguments, Pastor Degen accepted the appointment as pastor of the parish of Leun in the autumn of 1937 . He stayed there until 1951 and was then pastor in Wermelskirchen until his retirement . In 1968, 30 years after his resignation, Pastor Degen stood again in the pulpit of the church and preached as part of the festive service for the 75th anniversary of the church. After Degen had left the community, Pastor Schwalfenberg from Merzig, who never made a secret of his National Socialist sentiments, was commissioned to initiate a “pacification of the torn community”. On May 20, 1938 Pastor Heinrich Schmidt was appointed. He was a member of the German Christians. Tensions with the community did not ease. Parish life deteriorated more and more and the last presbytery meeting took place on July 20, 1939. Pastor Schmidt's political views had alienated the remainder of the church faithful in the community, which had fewer than 300 members at the end of the war.

In December 1944, the church suffered severe damage from air raids and was no longer usable.

The church in Christmas decorations

Pastor Schmidt was banned from exercising his office on June 25, 1945 because of his National Socialist sentiments. However, he officially held the parish office until his retirement in 1950.

The new pastor Paul Druschke was entrusted with the administration of the pastor's office in July 1945 and was officially the pastor's office from 1950. Until then he had to share the rectory with his predecessor. This also refused to hand over the official business to him. Due to refugees, the number of parishioners doubled within a few years to over 600. After the war damage had been repaired, the church was consecrated again on April 10, 1949.

In 1966 the community center at 20a Kunoweiher Street was inaugurated. Due to the topographical location of the church and rectory on a narrow rocky ridge, it was not possible to build a community hall in the immediate vicinity. The parish hall was 850 meters, about 10 minutes' walk from the church. The community center was renovated in 1984 and 1992 and abandoned in 2013.

In 1983 the church underwent an extensive interior renovation. The stained glass windows were created in this context.

Due to increased requirements, including on thermal insulation and accessibility, the parish hall could no longer be renovated economically. The solution was to purchase the New Apostolic Church in the Niederleuken district, which had been vacant for three years, and to convert it into a small community center. It was put into operation in January 2014 and inaugurated on July 20, 2014 after the final completion. The new parish hall is 1 kilometer or 15 minutes' walk from the church.

Bible passages on the roof 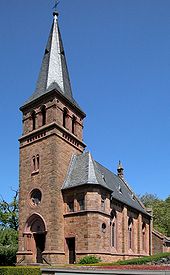 The church from the southwest

The church building, which was built in the style of historicism , is not precisely geosted due to its location on the ridge. It is roughly oriented towards ONO and is divided from west to east into a tower with a pointed helmet , a three-axis nave and a five-sided polygonal choir . The tower, which is built in front of the narrow western side of the nave in the longitudinal axis, is laterally accompanied by a two-storey stair tower . The complex is completed by a sacristy extension on the south side of the choir. Yellow-red sandstone blocks were used as building material for the rising masonry .

The longitudinally rectangular nave closes inside with an open roof truss . The two crossbeams, the support beams and the planking are painted an almost black dark brown. A Bible verse is affixed to the bottom boards on the eaves . On the right (north side): the harvest is great, but few are the workers. Therefore asks the Lord of the earth to send workers into his harvest. Matth. 9 37 + 38 . On the left (south side): I in the vine, you are the branches. Whoever remains in me and I in him brings much fruit, because without me you cannot do anything. Joh. 15,6 The choir, which is two steps higher than the nave, has a ribbed vault . There is a swinging gallery on the tower side . This can only be reached from the outside via a separate entrance in the stair tower to the right of the main entrance.

The church stalls consist of two blocks of straight transverse banks, between which a central aisle leads from the entrance portal in the tower to the choir. In the choir room, which has three tracery windows , is the neo-Romanesque altar table made of sandstone , on top of which is a metal cross. The baptismal font is to the left of the altar. On the south side of the triumphal arch , which separates the choir from the nave, there is a pulpit . This was originally raised on a pedestal and could only be reached from the sacristy. During the last renovation, the base was removed and the pulpit can now be reached directly from the choir. The altar and pulpit are still part of the original furnishings. 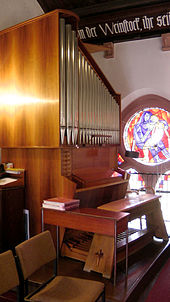 In the church plan , a place on the gallery was provided for the organ and a position in the financing plan for the church building . The money was not available for this, so that the church singing had to be supported by a harmonium for decades. In 1929 the Wipperfürth parish had the opportunity to buy their organ for 2000 RM. Due to a lack of funds, the option could not be realized because the parish was not able to pay the costs for dismantling and reassembly as well as transport.

In 1964 the regional church offered the community to borrow an organ positive for 5 years for a monthly fee of 30 DM. In the following year an organ building association was founded. Its chairman Willi Hoffmann visited many organs in the area. An organ made by Hermann Eule Orgelbau Bautzen in Saarlouis convinced him that this company should build the new organ. Because the headquarters of this company was in what was then the GDR , the contracts and payment had to be processed through the responsible foreign trade company of the GDR and the necessary import permits had to be applied for on the West German side.

The one-manual organ from the organ building workshop Hermann Eule Orgelbau Bautzen , inaugurated on April 10, 1968, is the masterpiece of the organ builder Eckhard Pietsch and has a mechanical action without registration aids . The organ's disposition is:

At the inauguration of the church, two bells from the Mabilon bell foundry rang in G sharp and c. The smaller bell was confiscated in World War I, the larger bell in World War II. Today the ringing consists of three bells in the Te Deum motif in g sharp 1 (580 kg), h 1 (430 kg) and c sharp 2 (240 kg), all from the Mabilon bell foundry in Saarburg. The bells hang on the upper floor of the tower and can be reached from the gallery via two long and steep ladders.

The first parish administrator for Saarburg was Wilhelm Figge. On July 27, 1850 he was appointed administrator of the Merzig-Perl-Wadern-Saarburg parish association. The official seat was initially Saarburg, from 1851 Merzig. His successor was Friedrich Gotthard Schneider from 1880. In 1895 Saarburg was detached from this parish association and was given its own parish office. For financial reasons this was only occupied by a vicar in the first few years. 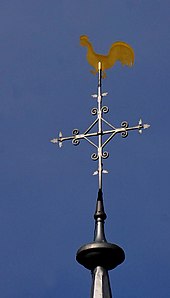 The church is open daily from 9 a.m. to 6 p.m. and has received the “Open Church” seal of the Evangelical Church in the Rhineland. It can be viewed individually or as part of a city tour. Information - also in Dutch - and a guest book are available.