The Evangelical Church of the Old Prussian Union (abbreviation EKapU, APU) was an Evangelical regional church in Prussia and its successor states from 1922 to 1953 . The church existed from 1817 to 1953 under different names and was continued as the umbrella organization of the church provinces, which themselves became independent regional churches between 1945 and 1948, after a further name change from 1953 to 2003 as the Evangelical Church of the Union .

The term Old Prussian referred to the area of ​​"old" Prussia before 1866, because neither the United State Churches of Hesse-Kassel , Nassau and Frankfurt am Main nor the Lutheran State Churches of Schleswig-Holstein and Hanover after the annexations of 1866 into the Prussian State Church were incorporated. 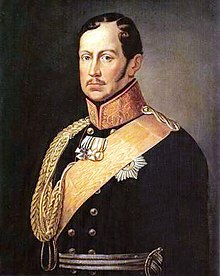 Friedrich Wilhelm III., The initiator of the union 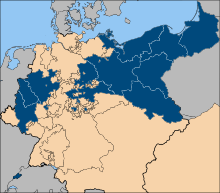 Prussia (with provincial division) within the German Confederation 1817

On September 27, 1817, King Friedrich Wilhelm III. , who in his capacity as summus episcopus held the sovereign church regiment of his territory, the union of the Reformed and Lutheran congregations to form a "Uniate" church in Prussia. The Prussian king had come to the conviction that the separation between the Protestant-Reformed - to which above all the Huguenots , the ruling Hohenzollern and the inhabitants of the Lower Rhine, in parts of the Hunsrück and parts of the Bergisches Land and the Siegerland belonged - and the Evangelical Lutheran Christians, who made up the majority of the Prussian population, was out of date. His ancestors, according to the Great Elector with the Berlin Religious Discussion , had already tried to overcome the intra-Protestant denominational contradiction in terms of unionism . The now united church was an administrative and not a confessional union; But confessional churches soon emerged.

An important date in the history of the APU Church was the Rhenish-Westphalian Church Ordinance of 1835.

In the course of history, the name of the church, founded in 1817, changed several times: in 1821 it was called "Evangelical Church in Prussia". After the advent of various free churches in the middle of the 19th century, especially the altkonfessionellen Old Lutherans , she called herself to distinguish these from 1845 "Protestant state church in Prussia."

The old Prussian regional church officially called itself from 1875 onwards the “Evangelical regional church of the older provinces of Prussia”. It was subdivided into church provinces in all nine old Prussian political provinces , namely Brandenburg (with Berlin ), East Prussia , Pomerania , Posen , Rhineland (with Hohenzollern ), Saxony , Silesia , Westphalia and West Prussia . The church district formed in 1898 in the diaspora area of ​​the Hohenzollern Lands , which had come to Prussia in 1850, did not belong to any church province; it was co-administered by the general superintendent and the consistory of the Rhenish church province.

In 1918, after the end of the First World War , the King of Prussia , Kaiser Wilhelm II, had to abdicate, which also meant that the sovereign church regiment ceased to exist. Therefore the old Prussian regional church gave itself in 1922 a new church order and the name "Evangelical Church of the Old Prussian Union" (EKapU or ApU); the church provinces were also democratized. From 1922, the leadership of the church provinces lay with the provincial church councils, which were elected by the provincial synods . The consistories, now supporting administrative organs of the church provinces, were headed by clerical superintendents general and legal consistorial presidents.

In the Third Reich , the common resistance during the church struggle in the Confessing Church against the German Christians who were loyal to Hitler shaped a small portion of the Christians in the church. The Barmer Theological Declaration of 1934 can be seen as a uniate confessional document in which Christians from the Reformed and Lutheran tradition joined together in the area of ​​the uniate church. The Evangelical Church of the Birkenfeld part of the country joined the EKapU on June 25, 1934 and has since formed a parish in its Rhenish church province.

On September 5, 1933, the Old Prussian Union introduced the " Aryan Paragraph " applicable to civil servants to Protestant clergymen. In response to this, among other things, the Pastors' Emergency League was founded on September 21, 1933 . After the transfer of the EKapU into the German Evangelical Church (DEK), which was brought into line on March 1, 1934 , the supporters of the Confessing Church declared the imposed church leadership to be illegal and heretical on May 29, 1934 at their first confessional synod. They saw a schism between their newly formed and to be formed organs and confessional congregations and the committees and congregations that were in line with them and considered themselves to be true EKapU. The District Court I Berlin ruled on November 20, 1934 that the de facto merger of the official EKapU with the DEK lacked any legal basis and that the EKapU therefore continued to exist. Since then, the representatives of the official EKapU and the Old Prussian Confessing Church have both claimed to represent the true EKapU.

After the Second World War , the Oder-Neisse Line became Germany's eastern border. Unlike in 1918/20, however, the new demarcation resulted in a comprehensive expulsion of the local population. Most of the Protestant parishes in East Prussia (today part of the Republic of Poland or - as Kaliningrad Oblast  - part of Russia ) as well as in East Brandenburg , Western Pomerania and Silesia (except for the provincial area west of the Neisse), which today belong to Poland, were evicted of their non-fled parishioners, and accordingly also all higher-level ecclesiastical organizations such as ecclesiastical provinces, etc. If Lutheran parishes remained or were newly established there, they belong to the Evangelical Augsburg Church in Poland or Evangelical Lutheran Church in Russia, Ukraine, Kazakhstan and Central Asia .

The church leaderships of the six church provinces still remaining in Germany, west of Oder and Neisse, western and central Brandenburg, the rest of Pomerania, the Rhineland, the province of Saxony, the rest of Silesia and Westphalia, met in 1945 in Treysa, Hesse ( Treysa Conference ) to make new fundamental decisions grasp. The church provinces became the independent regional churches

After further meetings in 1949, 1950 and 1954, they finally transformed the old Prussian regional church into the " Evangelical Church of the Union " (EKU). Like its six member churches, this joined the EKD and until 2003 was a union of six independent uniate regional churches. When the regional church of Anhalt joined in 1960, a seventh was added.

The church district of Hohenzollern was incorporated into the Württemberg regional church on April 1, 1950 , which had been provisionally responsible for it since 1945. The previous service order was retained.

The uppermost executive body was the Evangelical Oberkirchenrat (EOK), which was set up in 1850 and moved into its own new building in Jebensstrasse, Berlin, in 1912. It was occupied by theologians and lawyers. With the new church ordinance of 1922, his powers were curtailed. The church leadership, which until 1918 lay with the Prussian monarch as the summit episcopate , was transferred to the church senate in 1922, to which the EOK now worked. The President of the General Synod also chaired the Church Senate and represented the Church externally. In 1951 the EOK was renamed the Church Chancellery and remained under this name even after the Evangelical Church of the Old Prussian Union was renamed the Evangelical Church of the Union in December 1953.

In addition to the sovereign as summus episcopus, the presidents of the EOK led the church until 1922

President of the General Synod

On August 4, 1933, Ludwig Müller declared himself old Prussian regional bishop, after the Prussian state commissioner August Jäger had temporarily assigned him to lead the church. The German-Christian majority of the General Synod confirmed this autocratic act on September 5, 1933, by changing the church order through church law to the effect that it created the office of regional bishop in the first place. From October 3, 1935, Müller continued to hold the title of regional bishop, but no longer had any competence in church leadership.