The film is divided into a series of episodes based on a free re-arrangement of events and encounters from Casanova's autobiography.

At the Venice Carnival, the giant head of the goddess Luna is said to appear from the depths of the Grand Canal in a magnificent ceremony in the presence of the Doge . But the pulling ropes break and the head sinks back into the depths. Luna's eyes light up in the dark water, an image that is quoted again at the end of the film. The downfall of the goddess is seen as a bad omen . In the hustle and bustle that followed, the masked Casanova was given a ticket inviting him to a rendezvous on an island in the lagoon .

There he finds the nun Maddalena, with whom he unites, while a mechanical music box in the form of a golden rooster runs its program and the French ambassador watches the couple's love game through a hole in the wall. After the end of the sexual intercourse, which had already assumed slightly acrobatic forms, Casanova tried to recommend himself to the ambassador as a diplomat, scientist and alchemist , which apparently did not interest him, who had already left.

After escaping from the lead chambers , Casanova had to go into exile in France. There he is the guest of the very rich and very old Madame d'Urfé , who longs to attain the immortal soul of a man. Casanova offers her his help through a sex-magic operation. Due to the lack of attractiveness of his aged hostess, he has to ask for the support of his butt-wiggling helper Marcolina.

This is followed by an encounter with Henriette, Casanova's great love, who is traveling through Italy in the company of a Hungarian officer in men's clothing. With Henriette, now dressed as a lady again, Casanova visits a company of the eccentric Marquis Du Bois in the Duchy of Parma . The guests are a strange mixture of frivolous French and Spanish dressed in strict black. With a gloomy look, the audience follows a little opera penned by the Marquis: he himself is following a golden butterfly in a shimmering blue insect costume, a half-naked, boyish appearance that hops across the stage in delicate ballet steps. Finally the marquis overpowers the youth and sucks him up, driven by his hunger for love. Shortly afterwards, Casanova, to his greatest regret, is separated from Henriette by higher powers.

In his desperation, he thinks about becoming a monk or exterminating himself, which leads to an episode in London years later. Casanova, ruined by mother and daughter Charpillon, suffering from syphilis and impotent, has reached a rock bottom and tries to drown himself in the Thames . The sight of a giantess accompanied by two dwarfs (played by Sandra Elaine Allen , then the tallest woman in the world) brings him back to life. He follows the trio to a fair. The main attraction is a huge, wooden whale that visitors step into its mouth. Inside, images projected by a magic lantern are shown that have only one theme: the female lap - as an octopus , as a devouring vortex, or the grinning devil's face hidden in shame. Here the hero finds the giantess who appears in exhibition fights. He bribes her servants and secretly watches her in her tent, where this barbaric giantess of the mountains plays with her dolls and bathes with the dwarves. The next morning the fair is gone.

In the evening Astrodi sings in the Dresden Opera and Casanova stays after the performance. In the empty theater, Casanova meets his ancient mother, who is waiting for a servant to carry her out to the carriage. Casanova travels from court to court through Europe and finally ends up at the court of the Duke of Württemberg , a surreal stronghold of barbarism: uniformed Germans sipping wine from tankards roar and gossip, in the corner sits with a childish grin listening to a shell Herzog and the culture at this court consists of "organ cannonades". In this chaos Casanova finds the doll Rosalba, a mechanical creature that enchants him. He leads Rosalba to his bedchamber and, to the sound of the mechanical music box, performs an equally mechanical coitus with the automaton woman . 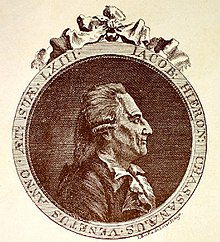 Portrait of Casanova as the frontispiece of his novel Icosameron , which also appears in a film scene with the abortions at Dux Castle.

Casanova's last stop was the position as librarian for Count Waldstein at Dux Castle in Bohemia . The hero remembers his life in writing. It appears to the county as a dusty relic of a bygone era. Casanova's arrogance and his quirks provoke torture on the part of the servants under the leadership of Feldkircher, the caretaker at Dux Castle. The end awaits him in his room, on the wall stands the golden cock of his music box with a broken wing, the wind of the Bohemian winter whistles outside and Casanova remembers a dream: the women from his past appear and disappear on a wide ice surface - and deeply under the ice the eyes of the sunken goddess Luna shine.

“Casanova appears as a tragicomic hero who, in a hermetic world of masks and scenery, becomes the victim of self-imposed sexual pressure to perform. Wavering between pity and unmasking, Fellini uses the example of a single figure to portray a decadent society that, isolated from the real world, hides its fear of death behind artificial aesthetic rituals. "

“Born out of an original aversion to the legendary womanizer and his memoirs, Fellini's work is partly a self-portrait of the artist looking at the planet woman, partly a journey to the end of the night, since Fellini's Casanova does lust without passion, acrobatics, is a sad person . The gilded mechanically circling bird, a metronome of love, employed during the act is characteristic. "

The film was shot entirely in the Cinecittà studios in Rome .