The garden pumpkin ( Cucurbita pepo ) is one of the five types of pumpkin used in horticulture and is found in many varieties , such as B. grown zucchini or spaghetti squash. It was named Medicinal Plant of the Year 2005. 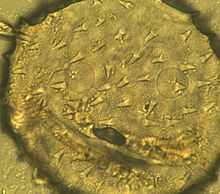 Pollen grain of the garden pumpkin

The garden pumpkin is an annual herbaceous plant . It grows as a climbing or creeping plant with a maximum extension of 10 m. The simple leaves have long stalks. The heart-shaped leaf blades are very large and somewhat lobed . The branchy leaf tendrils are likely to be derived from midribs. They react in a few seconds to a load of less than a millionth of a gram. In damp weather, the reaction is so quick that you can follow the curvature. The sprout growth can be up to 14 cm per day.

It is single- sexed ( monoecious ) and flowers from June to August. The funnel flowers are open in the mornings. The golden yellow corolla has a diameter of 7 to 10 cm. The corolla tube of the male flowers is cup-shaped, somewhat constricted and provided with awl-shaped to lanceolate tips. The sugar production in nectar is very high at 28 mg per day and flower . The flowers are frequently visited by bees and bumblebees . The pollen grains are very large.

The fruit is yellow to orange (with some cultivated forms also different colors), round or oblong and reaches a size of 15 to 40 cm in diameter. The fruits are berries (armored berries ); they weigh over 30 kg and are therefore among the largest fruits of all. The pulp is fibrous.

It can be distinguished from other cultivated pumpkin species by the following characteristics: The fruit stalk is hard, angular, only sometimes a little wider at the fruit base. The stem axis is hard, angular, furrowed and piercing. The leaves are palmately lobed, often deeply cut and also pungent hairy. The seeds are dull white to brownish, with a smooth surface and a clear but smooth edge. The seed scar is square to round.

The garden pumpkin is an annual climbing plant ; it freezes to death at temperatures below 10 ° C even if it is cold for a long time. It is a tropical plant d. That is, the germination and optimal growth temperatures are higher than those of native plants. The shoot growth per day is 14 cm. The cotyledons lay together in the evening d. that is, they perform a "sleep movement". The hair cells of the plant show a plasma flow that is clearly visible under the microscope . The branchy leaf tendrils are likely to be derived from midribs. They react in a few seconds to a load of less than a millionth of a gram. In warm, damp weather, the reaction takes place so quickly that you can follow the curvature. The vascular bundles of the phloem have large cells that are easily visible under the microscope.

The plant is monoecious. The flowers are "large funnel-shaped flowers" that are open in the morning. The sugar production in nectar is very high at 28 mg per day. There are many bees visiting. With a diameter of 0.2 mm and a weight of only 0.001 mg, the prickly pollen grains are the largest of the plants that grow here; They thus reach the size of the smallest seeds such as those found in the genus Orobanche or some orchids. Flowering time is from June to August.

The fruits are so-called armored berries; they weigh up to over 30 kg and are therefore among the largest fruits of all. The heaviest pumpkin to date was weighed in 2007 in the USA at 766 kg. On the other hand, there are also very small specimens barely 2 cm thick. The animals spread through mouth migration. The many small wild berries are also spread as roll fruit. Furthermore, the flat and slimy seeds spread as sticky.

Flower of a garden pumpkin 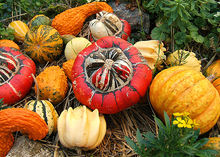 Ornamental forms of the garden pumpkin 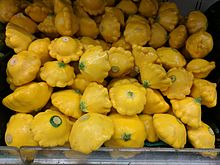 The garden pumpkin is the most diverse species of the genus pumpkins ( Cucurbita ). A distinction is made between several subspecies and several groups of varieties. The two systems can be combined as follows:

Phylogenetic studies have shown that the classifications based on the shape of the fruit essentially also correspond to the relationships.

Today the garden pumpkin is grown as a summer vegetable, especially in the Mediterranean region to Asia Minor and in the USA . The garden pumpkin is a tropical plant. Its germination and growth temperature is higher than that of plants native to Central Europe. The plant is very sensitive to frost and can be damaged in long-term cool summer weather below 10 ° C. Since the plant loves warmth and is also a heavy eater, it thrives particularly well on compost beds or compost heaps.

The Texan wild pumpkin ( Cucurbita texana ) is the root form of the garden pumpkin . The home of the various types of pumpkin, of which our garden pumpkin is the most important, is located between Peru and the southern USA . The pumpkin is one of the oldest cultivated plants of mankind and was already with Maya and Aztecs to the staple foods . Archaeological finds from Mexico indicate a cultivation of small-seeded forms around 7000 to 5000 BC. Chr. Finds from southern Mexico were dated 10,000 BC. Dated. Later, the garden pumpkin was domesticated independently in eastern North America. Christopher Columbus reports that he got to know and appreciate the plant in Cuba in 1492 . The first garden pumpkin seeds reached Europe at the beginning of the 16th century.

The crushed and sweet and sour preserved fruit pulp is tasty as a compote or meat topping. For pumpkin soups , the pulp of the pumpkin is boiled alone or mixed with potatoes and other vegetables (e.g. carrots) in a vegetable or meat broth and then pureed with spices. The large flowers are used for soups in Mexico and filled in Italy. Pumpkin can also serve as a salad. A specialty is the spaghetti squash, which is cooked whole, sliced, and delivers crumbly, threadbare flesh.

The fruits of the garden pumpkin are rich in potassium , calcium , magnesium and vitamin C , and the amino acid citrulline is also abundant . The seeds contain up to about 35% fatty oil (e.g. in the case of "oil pumpkin"), which is used as an edible oil in some countries . The pumpkin seed oil from Austrian Styria is particularly well known .

The ripe, dried seeds or the seed oil of the Styrian oil pumpkin are mainly used .

The garden pumpkin is grown in different varieties, including the various "ornamental pumpkins". In the United States and, increasingly, in other countries, it is common practice to hollow out pumpkins, carve faces into them and light them from the inside on Halloween .

The seeds of various cultivated varieties are used as medicinal drugs, today mainly from the well-studied and active ingredient-rich var. Styriaca, the soft-skinned Styrian oil pumpkin.

Application: Today the pumpkin seeds are mainly used for irritable bladder and complaints, such as those that occur when urinating with benign prostate enlargement . The sterols are supposed to influence the binding and storage of dihydrotestosterone , which is made responsible for the enlargement of the prostate . Also tocopherols and selenium with anti-inflammatory and antioxidant properties are discussed as further active ingredients.

Pumpkins are best stored at 7 to 10 ° C and an average humidity of 90%. Then winter pumpkins can be kept for up to six months. Summer squash (fruits harvested in summer) have a thinner skin and are therefore less durable at around three months.