This article is about the guarana plant. For more meanings, see Guaraná (disambiguation) .

Guarana ( Paullinia cupana ) is a species within the family of the soap tree plants (Sapindaceae). It is native to the Amazon basin . The name Guaraná refers to the South American indigenous people of the Guaraní . It has a long ethnobotanical tradition and its caffeine-containing seeds are often used as dietary supplements and additives in beverages. 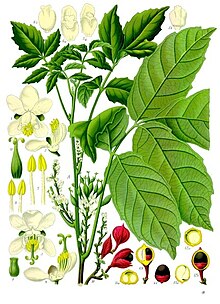 Illustration from Koehler's Medicinal Plants , 1897 by Guaraná ( Paullinia cupana ): “ A branch of the plant with flowers and unripe fruits. B Panicle with ripe fruits. 1 male flower; 2 the same after one-sided removal of the flower envelope; 3 hermaphrodite; 4 the same after partial removal of the inflorescence, seen from the side; 5 upper petal with scales seen from the axis; 6 lateral petals with scales, a) viewed from the axis, b) from the back; 7 stamen of female flower; 8 stamen of the hermaphrodite, belly and back views; 9 male flower pestle; 10 the same as the hermaphrodite; 11 two-seeded fruit, a) cross-section, b) longitudinal section; 12 solitary fruit, a) cross section, b) longitudinal section; 13 seeds with aril; 13a seeds in longitudinal section. - A 2/3 natural size. B natural size. 1 to 10 enlarged. 11a to 13a natural size. "

Guaraná is a woody plant; it grows as a climbing shrub or liana , which can reach heights of up to 12 meters in natural tropical locations. The bark is initially brownish, soft and hairy and soon becomes bald. Only in Paullinia cupana var. Sorbilis are tendrils present, they are located in the leaf axils.

The alternately arranged leaves are 20 to 35 centimeters long and divided into petiole and leaf blade. The petiole and rhachis leaf are trough-shaped, convex and slightly striped in between. The leathery, bald, unpinnate leaf blade contains five 10 to 20 cm long and 4.5 to 9 cm wide leaf sections. The upper leaf sections are oblong and the lower egg-shaped. The terminal leaflet has a pointed or almost wedge-shaped base and the lateral leaflets are rounded to more or less stalk-shaped. The leaf margin is more or less clearly to hardly recognizable serrated. The stipules are 2 to 3 millimeters long.

Guaraná is single sexed ( monoecious ). A few flowers are grouped together in laterally, terminally or at the tendrils initiated, racemose inflorescences . There may be an inflorescence stem. The inflorescence axis (Rhachis) has a diameter of about 2 mm. The bracts are awl-shaped with a length of 1 to 1.5 mm. The 4 to 5 mm long flower stalks are divided below their middle.

The relatively small, unisexual flowers are zygomorphic and five-fold with a double flower envelope . The five free sepals are almost membranous and about 3 mm long. The five white petals are oblong with a length of about 5 mm. The eight stamens consist of a soft hairy stamen and bare anthers. There is a kind of nectar disc at the base of the ovary. The bald ovary is three-chambered.

The stalked, septicidal , 2 to 3.5 cm long, deeply incised, triple capsule fruit , which is 6 to 8 mm long when the fruit is ripe , turns orange-red when ripe, opens partially and contains only one to three seeds. The approximately 12 mm long, bare, black to greenish seeds have a white sarcotesta at their base . The cracked fruit with its seed in it works like an eye, and legends of the indigenous peoples are linked to it.

There is cross- pollination (allogamy) and pollination is carried out by bees of the genera Melipona and Apis .

The seeds are naturally spread by large birds. The seeds usually lose their ability to germinate after just three days and do not survive dehydration or frost. The germination time can be over 100 days.

There are two varieties of Paullinia cupana Kunth : 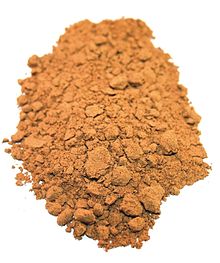 Guaraná has been known to the Indians in the Amazon for centuries. Guaraná paste was used in a similar way to cocoa / chocolate. It has been widely used in folk medicine.

Guaraná is grown as a climbing plant in plantations in Brazil, Venezuela and Paraguay. Growing from seeds is difficult.

The peeled and dried seeds are ground to a light brown powder, suspended in water and drunk sweetened with honey. Similar to coffee, the drink has a stimulating effect and suppresses feelings of hunger .

Many Brazilian beverage manufacturers (including Antarctica, Brahma, Kicos, Kuat) use guarana extracts to produce a lemonade-like soft drink typical of Brazil , which is homonymously referred to as guarana .

Dissemination can also find chocolate , herbal and fruit teas , chewing gum , energy drinks and lubes with guarana. The substance is also available separately as a dietary supplement . The proportion of tannins is around 25 percent, which delays and prolongs the effect of the caffeine it contains. The products are advertised as “stimulants” and “energizers”. In addition, Guaraná products are considered performance-enhancing in fitness circles and by bodybuilders .

Guaraná has an extremely tart to very bitter taste, which is why it is usually not consumed pure, but added to various foods such as those mentioned above.

The seeds of Paullinia cupana var. Sorbilis are pulverized and mixed with cassava flour ( Manihot esculenta Crantz). This is used to make the so-called “pasta guarana”, which can be dissolved in hot or cold water as desired. The caffeine content of the “pasta guarana” is 3 to 6%, the tannin content 2 to 3%. The drink is astringent .

Their red fruits with the bitter- tasting kernels are characterized by their high caffeine content (4–8% in dry matter ).

Guaraná is said to have a slight fever lowering effect and to strengthen stamina in the case of physical weakness . Similar to coffee , guarana has a stimulating effect on the cardiovascular system. It also reduces feelings of hunger and thirst , which increases the risk of dehydration in athletes.

Side effects and risks

You may experience the same side effects as excessive consumption of caffeine from other sources, such as increased irritability, difficulty sleeping , tachycardia , headache , tremors, or muscle pain . When discontinuing the products after long-term consumption, physical withdrawal symptoms can occur. Guaraná products are unsuitable for people with high blood pressure and chronic headaches, as well as for pregnant women and those who are breastfeeding.

An overdose of caffeine is usually seven to ten cups of coffee within a short period of time, or 20 grams of pure guarana powder. Doctors recommend drinking a large amount of water as an immediate measure in this case.