Johannes Heinrich Schultz (born June 20, 1884 in Göttingen ; † September 19, 1970 in West Berlin ), usually called J. H. Schultz for short (and often pronounced I. H. Schultz ), was a German psychiatrist and school-independent psychotherapist who worked during the Nazi regime. From 1940 for the "extermination" of disabled people ( euthanasia ). Schultz became world famous for the development of autogenic training .

The son of a theologian studied medicine in Lausanne , Göttingen (where he met Karl Jaspers ) and Breslau . In 1907 he received his doctorate in Göttingen. 1908, after its approval , he was first there in the clinic of the University Hospital operates from 1911 in the Department of Dermatology in Breslau , the Paul-Ehrlich-Institut, Frankfurt am Main, in the mental hospital Chemnitz and finally to the Psychiatric University Clinic in Jena under Otto Binswanger , with whom he completed his habilitation in 1915 . A first attempt in 1912 failed due to protests by Jewish patients because of his anti-Semitic statements - but this claim cannot be further verified at present; Schultz himself depicts it in his autobiography as an intrigue.

During the First World War he worked in Marienburg / West Prussia , Rudczanny and Allenstein (contact Karl Abraham here) and from 1916 to 1918 headed the “Imperial Military Convalescent Home Malonne” near Namur in Belgium ; In 1919 he became an associate professor for psychiatry and neurology in Jena, from 1920 chief physician and scientific director of the Lahmann sanatorium on the Weißen Hirsch near Dresden. In 1924 he settled in Berlin as a neurologist .

Schultz was not allowed to be a member of the NSDAP , as his first marriage was to a Jew, but he joined the NSKK in 1933 , which was absorbed into the SA in 1935 . He was a candidate for the National Socialist Medical Association .

In 1940 Schultz propagated the "extermination" of disabled people (" euthanasia "). He also passed “death sentences” against hysterics through his diagnoses . He also advocated allowing divorce from "such a beast".

As part of his work at the Göring Institute, Schultz was directly involved in the persecution of homosexual men (see also Homosexuality during the National Socialist era ). Schultz was of the opinion that there is hereditary and curable homosexuality . At the institute, attempts were made to “cure” homosexuals on the one hand, and on the other, Schultz headed a commission that forced “suspects” to have sexual intercourse with prostitutes in order to “determine” whether they were homosexual. "Guilty" were transferred to concentration camps.

After 1945 he continued to meet with Werner Heyde , a leading expert in the T4 campaign who lived in hiding. Schultz worked as a neurologist in Berlin. In 1956 he was editor of the journal Psychotherapie and honorary member of the DGPT . In 1959 he founded the German Society for Medical Hypnosis and Autogenic Training .

Johannes Heinrich Schultz died in Berlin in September 1970 at the age of 86. His grave is on the state's own cemetery in Heerstraße in Berlin-Westend (grave location: II-W-2-40). 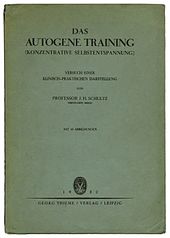 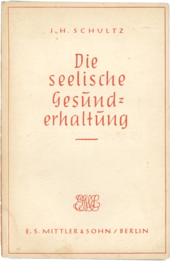 Since at least 1909 Schultz dealt with psychoanalysis .

He became known through the development of autogenic training , which he first publicly presented in 1926 as "autogenic organ exercises" on the basis of hypnosis research and extensive individual studies, including in self-experiments, and which he called "autogenic training" in 1928. It is an autosuggestive exercise program to deeply relax and achieve more serenity.

In addition, Schultz was a specialist in hypnosis as well as questions relating to psychotherapy and the theory of neuroses .

In the GDR , Schultze's writings Gender, Love, Marriage (Reinhardt, Munich 1940) and The Mental Health Preservation were placed on the list of literature to be segregated with special consideration of the war conditions (Mittler, Berlin 1942) .