The small rattlespot ( Rhinanthus minor ) is a species of the genus rattle pots ( Rhinanthus ) within the family of the summer root plants (Orobanchaceae). The rattle pot owes its common German name to its ripe fruits , in which the seeds rattle when they are moved. Rhinanthus minor is widespread in the northern hemisphere , especially in Eurasia and North America .

Detail of the inflorescence

Flower, the bluish teeth at the tip of the yellow crown are at most 0.7 mm long and wider than long.

Blossom, in the right picture the bald calyx has been partially removed. The crown tube is straight. 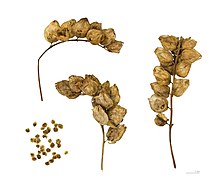 The small rattlespot grows as an annual herbaceous plant and reaches heights of up to 50 centimeters. The upright, simple or branched stem is square in cross section and is often black-striped or spotted.

The constantly against arranged on the stems leaves are sessile ( "sitting"). With a length of 20 to 30 millimeters and a width of mostly 5 to 8 millimeters, occasionally only up to 2 millimeters, the leaf blade is ovate to lanceolate with an almost heart-shaped blade base and entire or toothed leaf margin. The leaves can be hairy or glabrous; the top of the leaf, and occasionally the underside, is flaky.

Between the uppermost branching of the stem axis and the lowest bracts there can be one to six pairs of inserted leaves, but these can also be missing. Terminal, spike-like , racemose inflorescences are formed. An almost sessile flower sits above a leaf-like bract . The bracts are triangular, glabrous or slightly scaled and are longer or only slightly shorter than the sepals . The edge of the bracts is serrated, with the lower teeth being significantly larger than the upper ones.

The hermaphrodite flowers are zygomorphic with a double flower envelope . The calyx, which is usually medium green or covered with a red color, is flattened and ends in four calyx teeth. Hair is either only found on the edges or the calyx is completely hairy. The crown is 12 to 15 millimeters long, rarely up to 17 millimeters, is yellow to brownish-yellow in color and has two lips. The lower lip of the crown is three-lobed and curved downward so that it moves away from the upper lip. The upper lip is compressed and below the tip is covered with two purple-colored, rounded teeth. The back line of the crown is more or less straight and unites with the convexly curved upper lip.

The stamens come in two different forms and attach to the upper lip of the crown. The anthers are hairy and not prickly. The scar does not or only slightly protrudes from the crown.

The flattened capsule fruits are shorter than the calyx; they are divided into chambers and contain only a few seeds . The winged seeds are approximately 4.9 × 3.8 millimeters in size, more or less disk-shaped, have no elaiosomes and weigh on average 2.84 milligrams.

An important vegetable ingredient the iridoid - glycoside Rhinanthin (C 29 H 52 O 20 ), which may for grazing animals is toxic.

The small rattlespot is a facultative semi-parasite , so it carries out photosynthesis itself and can survive without a host, but parasitizes through the formation of haustoria on the roots of other, neighboring plant specimens. More than 50 plant species from at least 18 families are attacked, the majority of which are sweet grasses (Poaceae) with around 30 percent and legumes (Fabaceae) with around 22 percent. Occasionally it can be observed that other specimens of its own species are parasitized by the small rattle pot. A plant rarely forms a haustorium on its own root. Research at a location in East England showed that an average of four different plant species were parasitized by just one plant specimen of the small rattlespot, while some plants parasitized on at least seven other species.

The formation of a haustorium begins with the fact that the root of the host is enclosed. Then its outer bark is pounded by a pin that penetrates the vascular bundle of the host. The connection between the host's xylem and the cone is established by a secondary xylem formed by the small rattling pot. This xylem is arranged centrally in the haustorium and is surrounded by the so-called hyaline body . These hyaline bodies are rich in nuclei . It is believed that they are responsible for processing the substances dissolved in the xylem sap. The xylem sap is transported from the host to the parasite by compensating for a pressure difference that arises from increased water evaporation at the particularly large stomata of the small rattling pot.

Some host plants react with defense mechanisms against the intruding haustoria. For example, the meadow marguerite ( Leucanthemum vulgare ) forms a woody area around the penetrating cones, while the ribwort ( Plantago lanceolata ) reacts with the death of the cells around the penetrating cones and thus also creates a spatial separation between the two species. Both methods prevent the small rattle pot from establishing a connection with the vascular system of the other type. With the sweet grasses and legumes, such a mechanism is not or hardly pronounced, so that the infestation is more effective here for the little rattlespot. This is particularly evident from the increase in the biomass produced : the growth of the host is often significantly weakened. If some herbaceous plants that have developed the defense mechanisms described above are attacked, the biomass of the small rattlespot may even be lower than that of plants that cannot find a host.

After stratification in winter, the seeds usually germinate at the same time as the host plants in February and March. The seeds germinate epigeously . By extending the germ axis, the seed coat is pushed over the cotyledons and thrown off as soon as the cotyledons enlarge. The radicle is soon replaced by laterally located roots. The flowering period begins in early May and usually extends into July or August, and occasionally into September. The formation of fruits begins in June. After the seeds have ripened, the seeds remain in the open capsule fruits for a few weeks.

The small rattlespot is an optional semi-parasite , so it can get some of the nutrients it needs from other plant species. The small rattling pot only develops roots to a limited extent , as it often benefits from the root system of the host plants. If a root comes into contact with the root of a host plant, haustoria are formed, the size of which - depending on the type of host - is usually around 1 millimeter. Haustoria, which are formed on the roots of the common red fescue ( Festuca rubra ), are usually much smaller, whereas haustoria on common horned clover ( Lotus corniculatus ) are usually even larger than 2 millimeters.

The growth form of the plant specimens depends, among other things, on whether and on which host it parasitizes. Non-parasitic plants are often only 5 to 7.5 centimeters tall and do not branch, the total leaf area usually ranges from 400 to 910 square millimeters. For example, if the plant parasitizes barley ( Hordeum vulgare ), it can reach a height of up to 21 centimeters and a total leaf area of ​​4400 to 5150 square millimeters. Plants that parasitize on hill clover ( Trifolium alpestre ) have larger leaves than plants growing on barley, which become significantly less brittle.

The seeds are gradually scattered from the fruits by wind or animals.

Like all species of the genus Rhinanthus , the small rattlespot is mostly avoided by grazing animals , but cows have also been observed eating the plant. Different types of butterflies are associated with the small rattlespot. The flowers, seeds and stems of the small rattle, for example, from the crawler of the winder -type Phalonidia permixtana eaten other winders as Falseuncaria ruficiliana and Endothenia marginana eating the seeds of the plants, the caterpillars of Falseuncaria ruficiliana overwinter in the seed capsules. The caterpillars of the corn borer -Art Opsibotys fuscalis eat flowers and seed pods, under the clamps eat Eupithecia subumbrata and Perizoma albulata on the plants. Occasionally the plants are also attacked by leaf miners (Agromyzidae) or tubular aphids (Aphididae).

Rhinanthus minor is common in the northern hemisphere , especially in Eurasia and North America . The small rattlespot occurs throughout Europe, including the British Isles , but is rare in the Mediterranean . In Iceland lowlands applies Rhinanthus minor as often, inside the island this species was only once found. In northern Sweden he is a neophyte . The North American distribution areas extend from Alaska to Canada , and from Labrador to New England and New York , and Rhinanthus minor is known from the Rocky Mountains and northwestern Oregon . Occurrences found in New Zealand are likely introduced and are not part of the original flora .

The small rattlespot grows in a variety of soils , including clay , sand , lime, and occasionally peat ; This species is absent in locations where the soil has a pH value of below 5.0. The small rattling pot is also not found in very dry locations, but is occasionally part of the vegetation of sand dunes, especially where a high proportion is found on perennial plants . The Kleine Klappertopf tolerates locations that are flooded in winter as well as locations that are slightly or heavily flooded in summer that are only slightly flooded in winter.

In Central Europe, Rhinanthus minor is often part of cultivated meadows (Molinio-Arrhenatheretea). In Germany in particular, Rhinanthus minor can be found in all wet meadows (Molinietalia) and in mown fresh meadows and fresh pastures (mown Arrhenatheretalia). Even in the mat-grass pastures (Nardetalia) the nature place. Occurrence of species-rich are from the north of Sweden Anthoxanthum odoratum meadows known, but there are also in Sweden populations that are growing on roadsides.

In the Allgäu Alps , it rises on the Schlappoltalpe in Bavaria to an altitude of 1500 meters.

The first publication of Rhinanthus minor was in 1756 by Carl von Linné .

The small rattling pot is a highly variable species, the habitus is strongly dependent on factors such as the location and the host plants. It is therefore difficult to define different, well-defined subspecies within the species. Many of the recognized subspecies were first described as independent species.

The small rattle pot is known for its medicinal effectiveness, among other things it can be used to relieve the symptoms of asthma and dry cough, as well as to solve catarrh and as a rinse for various eye complaints.