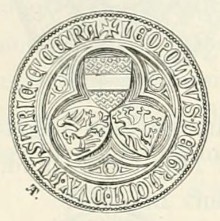 Duke Leopold IV of Austria (* 1371 ; † June 3, 1411 in Vienna ) was an imperial prince from the Habsburg dynasty . He ruled from 1392 to 1406 as Leopold II over the county of Tyrol and the Vorderen Lande ( Upper Austria ). From 1406 until his death he was the senior of the family and, together with his brother Ernst I, ducal regent of " Danube Austria " for his relative, Duke Albrecht V of Austria, the only son of Duke Albrecht IV of Austria.

Duke Leopold IV was the second eldest son of Duke Leopold III. from Austria (1351–1386) from his marriage to Viridis Visconti (1350–1414), a daughter of Bernabò Visconti , lord of Milan . Together with his brothers Wilhelm , Ernst I and Friedrich IV , he formed the Leopoldine line of the Habsburgs. Her uncle was Duke Albrecht III. of Austria (1348–1395), whose only son, Duke Albrecht IV, continued the Albertine line of the Habsburgs.

Leopold IV was married to Catherine of Burgundy (* 1378; † around 1425), a daughter of Duke Philip of Burgundy from his marriage to Margaret of Flanders. Nothing is known about the fact that he had children; in any case, his marriage remained childless. Originally a marriage with Katharina's older sister Margarete was planned for him , but this did not materialize. At the end of 1384 the first discussions about a possible marriage with Katharina were held. The wedding with her was initially planned for September 29, 1385, but had to be postponed several times for various reasons and ultimately took place in Dijon between September 14 and 17, 1387 in the presence of Leopold . However, Katharina did not travel to him until September 18, 1393 years later. The marriage of the two ended with Leopold's death in 1411. According to some statements from Katharina, the relationship between the couple should have been quite good.

Succession arrangements after the death of Leopold III.

When her father died in the battle of Sempach in 1386 , Leopold's older brother Wilhelm, who was already of legal age at that time, succeeded him as the eldest son. However, with the consent of the prelates and sovereigns, he accepted his uncle Albrecht III for himself and his siblings only a little later on October 10, 1386. as a guardian, who thereupon the between him and Leopold III. In the Treaty of Neuberg of 1379, the real division agreed upon for the time being suspended and sole rule over all dominions of the family took over. Leopold IV did not agree to this regulation until November 1386.

In 1392 Leopold IV was given the administration of the County of Tyrol and the Vorderen Lande by his uncle . After his death in 1395, Leopold IV signed a house contract with his brother Wilhelm and his cousin Albrecht IV in Vienna, in which his rule over Tyrol and the Vorderen Lande (" Upper Austria ") was confirmed. Since the income from these parts of the “Leopoldine Lands” at that time was much lower than that from the dominions that Wilhelm administered, Wilhelm also undertook to pay financial compensation. The contract also entrusted Leopold IV with the care of his younger brother Friedrich IV, while Wilhelm committed himself to that of Ernst I. On September 20, 1402, Leopold IV concluded another contract with his brothers in Bruck an der Mur on the administration of the lordship, in which his two younger brothers became co-rulers in the respective domains of their older brothers.

Leopold as a politician in Tyrol and the Vorderen Lands

After taking over control of Tyrol and the Vorderen Landen, Leopold tried above all to compensate for the territorial losses during the battles of Sempach and Näfels by acquiring new, equivalent dominions as pledges or by purchase. Politically, in contrast to his predecessors, he relied particularly on the noble families. In Tyrol, in particular, he granted them a number of privileges and tried to incorporate them into his politics, which, however, weakened his position as sovereign considerably.

After the deposition of King Wenceslaus IV of Bohemia as King of the Holy Roman Empire by the "Rhenish" electors in 1400 and the election of Count Palatine Ruprecht III. at Rhine as his successor, Leopold IV took his side in the interests of his dominion. As early as April 1397, the two had met in Heidelberg , where they formed an alliance with one another, before Leopold visited the Princes and Cities Association in Frankfurt am Main in May 1397 . On July 2, 1401, a marriage between Leopold's brother Friedrich IV and Ruprecht's daughter Elisabeth was agreed between Leopold and Ruprecht in Mainz . In autumn of this year Leopold supported Ruprecht on his Italian campaign, where he was captured by the Milanese after a battle near Brescia. Presumably due to his family ties to the Duke of Milan, he was released three days later and then returned to his countries. After the death of his cousin Albrecht and his brother Wilhelm, he tried to succeed him, with which his political focus shifted to the eastern part of the rulers of the House of Austria. It has the impression that as a result of this development and the Appenzell Wars, he was gradually forced to hand over rule in the Vorderen Landen and then in Tyrol to his brother Friedrich, with the fateful battles of Vögelinsegg in 1403 and the Stoss came in 1405.

When his cousin Albrecht IV died unexpectedly in 1404, he “applied” for guardianship over him, but Wilhelm prevailed against him. When Wilhelm died unexpectedly and without descendants in 1406, he claimed his successor as senior of the House of Austria and tried to take over sole rule, which is why he got into a serious conflict with his brother Ernst I, who was also Wilhelm's co-regent claimed. An arbitration ruling by the provincial estates of September 14, 1406, to regulate the situation until Albrecht V came of age, was only temporarily successful and led to a war between Leopold and Ernst in the winter of 1407, in which the Council of the City of Vienna, which at that time most important city in the Duchy of Austria was involved. After both finally made peace on January 14, 1408 and Leopold took over the rule of the Duchy of Austria, he left the Viennese mayor Konrad Vorlauf and the councilors Hans Rockh and Konrad Ramperstorffer , who had supported Ernst, after a dubious process on the pig market in Vienna (today: Lobkowitzplatz) publicly behead. After lengthy negotiations in which the estates were involved, the later Emperor Siegmund decided that Leopold and Ernst should exercise the guardianship of Albrecht V together until he reached the age of majority, whereby Albrecht was allowed his own household and as a date for reaching the age of majority April 24, 1411 was established. When this date passed without Leopold and Ernst officially resigning from their guardianship, the state estates had Albrecht V secretly brought to a state parliament in Eggenburg , where they paid homage to him as sovereign prince. A little later Leopold IV died, obviously surprisingly, in Vienna.

Death and consequences, distribution of the hereditary lands 1411

After his death, Leopold IV was buried in the ducal crypt in St. Stephen's Cathedral in Vienna . The exact cause of death is unknown, it is believed that bloodletting as a result of a leg injury or an injury from a crossbow led to his death. The best known is a story that links his death to the state parliament in Eggenburg. Allegedly he died of a stroke caused by the news of the kidnapping of the young Duke Albrecht V from Vienna by the Austrian estates and his homage in Eggenburg as sovereign. Allegedly, his death caused joy and jubilation among the people.

With the support of the later Emperor Siegmund, who had meanwhile been elected King of the Holy Roman Empire, Albrecht V succeeded in asserting sole rule over the Duchy of Austria ("Danube Austria"). Ernst I limited himself to rule over the duchies of Styria, Carinthia and Carniola ("Inner Austria"), Friedrich IV. Remained ruler of the County of Tyrol and most of the Vorderen Lande ("Upper Austria"). This created the three “groups of countries” that were to be decisive for the administrative structure of the Habsburg hereditary lands up to modern times.

Leopold was later often referred to as Leopold the Younger to distinguish him from his father of the same name, for example in a picture in the Habsburg portrait gallery in Ambras Castle . As nicknames have been handed down for him: Leopold the fat or Leopold the proud .

Not a single authentic image of Leopold IV has survived. The family tree portrait at Tratzberg Castle was created almost 100 years after his death and can therefore not be classified as lifelike. The author of the “Wiener Annalen” describes Leopold as “a straight and strong prince”, but does not go into detail about his appearance. According to information about the opening of his tomb in 1739, his skeleton is said to have had a remarkable length.

Leopold did not include the Archduke title in his documents and there is no pictorial representation with the corresponding insignia. His small title was: Leupolt von gnaden gnaden herczog ze Österreich, ze Steyr, ze Kernden and ze Krain, grave ze Tyrol etc. In his big title he describes himself as Duke of Austria, of Styria, of Carinthia and of Krain, Count of Tyrol, to Habsburg, to Pfirt and to Kyburg, Herr auf der Windischen Mark and zu Portenau, Margrave of Burgau and Landgrave in Alsace, in Breisgau, etc. In the common documents with his brother Friedrich IV that have been preserved, he becomes common called first. His equestrian seal shows parallels to the second equestrian seal of his uncle, Duke Rudolf IV of Austria. It shows a large number of coats of arms presented in the seal field and in the border by means of a twelve pass, including the five-eagle coat of arms, which was ascribed to Saint Leopold . His primary aim here was obviously to emphasize his claim to rule over many territories. The shields of Austria, Styria and Tyrol can be found in a three-pass on a coat of arms seal, while the inscription only mentions the Austrian duke title.

Leopold may have been a member of the salamander society.

Leopold as a patron of the arts and sponsor

The builder is Leopold IV in Baden im Aargau (new construction of the St. Nicholas Chapel in Stein Castle in 1398), in Innsbruck (purchase of the Burggrafenhaus in 1396 and renovation) and in Wiener Neustadt (expansion of the castle there since 1410 ) been active. In 1399 he organized a large tournament in Freiburg im Breisgau, in which about 350 knights took part. A splendidly decorated book of hours with French characteristics, which is now kept in the manuscript collection of the Austrian National Library, was probably made for him.

After taking over control of Tyrol and the Vorderen Lands, Leopold stayed mainly in the Vorderen Lands from the beginning of the 1390s. His preferred seat of power were the towns of Ensisheim and Thann , he also stayed in Brugg an der Aare and Baden in Aargau , and occasionally in Rottenburg am Neckar and Freiburg in Breisgau . In 1401 he stayed for a long time in the County of Tyrol, first at Castle Tyrol near Meran and then in Innsbruck . From the autumn of 1402 he stayed mainly in Graz . As a result of the Appenzell Wars, Leopold stayed in Tyrol and the foothills for a longer period in 1406. After the death of his older brother, the Hofburg in Vienna became his residence.