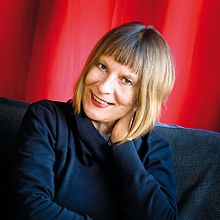 Monika Treut (born April 6, 1954 in Mönchengladbach ) is a German film director , film producer and author who has gained international recognition as the avant-garde of New Queer Cinema .

After graduating from high school , Monika Treut began to study German and political science at the Philipps University in Marburg / Lahn in 1972 . She completed her studies in 1978 with the state examination, where she wrote a written thesis on the experimental camera helmet films by Margaret Raspé . She showed her early interest in film and video during her studies by working at several media centers in Germany. In 1979 she moved to Hamburg , where she was a founding member and employee of the women's media shop Bildwechsel and made several short video films. PhD in 1984she with a dissertation on the image of women in novels by Marquis de Sade and Leopold von Sacher-Masoch . Her book The Cruel Woman on sadistic and masochistic fantasies was published in the same year by Stroemfeld / Roter Stern. Also in 1984 she founded the Hyäne I / II film production together with Elfi Mikesch .

In 1985 Treut dealt with the masochistic imagination in her first feature film Seduction: The Cruel Woman , which she co-directed with Elfi Mikesch and starred with Udo Kier and Mechthild Großmann . In the following years she was involved in the Hamburg film office, worked as assistant director to Werner Schroeter at the Düsseldorfer Schauspielhaus and, as a screenwriter, producer and director, realized her feature film Die Jungfrauenmaschine , which is humorously directed against the illusions of German-romantic love and the gaze casts on a confident love life for women in San Francisco . With these two films, Monika Treut had become one of the pioneering initiators of New Queer Cinema , in which sexual identities are dissolved in many ways.

In 1989 she moved to New York City , where she shot her multicultural comedy My Father is Coming , with Alfred Edel in the role of a lovable Bavarian philistine who had sexual experiences with the performance artist Annie Sprinkle in New York . In 1992 Monika Treut founded her own production company Hyena Films in Hamburg. Sexual border crossings and erotic fantasies are the subject of her documentary films, which have become classics, which focus above all on extraordinary women, including Annie Sprinkle, the radical cultural critic Camille Paglia , the actress Eva Norvind , who ran a famous SM salon in New York, or the “Queen of Cyberspace” Sandy Stone in the documentary Gendernauts - a journey through the land of the new sexes , in which the 1999 transgender scene in San Francisco is depicted and a “journey through the sexes” is undertaken.

From 2001 their work shifted more into the political field. In the documentary Warrior of Light , she describes Yvonne Bezerra de Mello's commitment to education for children in a favela in Rio de Janeiro ; with Zona Norte she documented the development of the project and former students fifteen years later.

Since 2004, the island republic of Taiwan has been the focus of her attention, with the various ways of life of women in particular on which she focuses. In 2009 she processed her experiences with Taiwanese culture in the feature film Ghosted , a mysterious love story in which different cultural images of life and death are brought together with tension.

Monika Treut's films are shown at many film festivals around the world, and more than twenty retrospectives, from Cambridge to Taiwan, from Helsinki to Los Angeles , have so far been dedicated to her dedicated work, above all for the self-determined life of women. She complements her practical film work through her participation in international colloquia and through her educational work, particularly at American colleges ( Vassar , Hollins and Dartmouth ), at art institutes such as the San Francisco Art Institute and at universities ( Bloomington , Chicago , San Diego and Cornell) ). Monika Treut is a member of the German Film Academy , Free Academy of the Arts in Hamburg , Documentary Film Working Group, AGDOK and ProQuote Director .