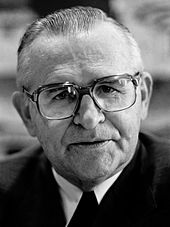 Paulo Evaristo Arns was born the fifth of thirteen children to a German-Brazilian family who came to the country from the Moselle region . His father was Gabriel Arns (1890–1965) and his mother Helene Steiner (1894–1974). Three of his sisters are religious, one brother is also a member of the Franciscan order ; his sister Zilda Arns was president of the Pastoral da Criança , the children's pastoral care of the Catholic Church in Brazil. He was the uncle of Leonardo Ulrich Steiner , Archbishop of Manaus.

Paulo Evaristo Arns studied philosophy in Curitiba from 1941 to 1943 and theology at the Catholic University of Petrópolis from 1944 to 1947 .

On December 10, 1943 Arns joined at the age of 22 years in the Franciscan order, and received on 30 November 1945 Dom José Pereira Alves , Archbishop of Niterói , the sacrament of Holy Orders . He worked in Petrópolis and at the same time taught theology at the Catholic University of Petrópolis. In 1950 he studied literature , Latin , Greek and ancient history at the Sorbonne in Paris before he returned to Petrópolis.

On May 2, 1966, Arns was appointed titular bishop of Respecta and auxiliary bishop in the Archdiocese of São Paulo . He was ordained bishop by Agnelo Cardinal Rossi on July 3 of the same year. Co- consecrators were Anselmo Pietrulla OFM , Bishop of Tubarão , and Honorato Piazera SCJ , Titular Bishop of Castellum Iabar and Coadjutor Bishop of Lages . As a motto he chose Ex spe in spem (Latin "From hope in hope", "From hope hoping") ( Rom 4.18  EU ).

On October 22, 1970 he was appointed Archbishop of São Paulo . During the consistory of March 5, 1973 Pope Paul VI took him . as cardinal priest with the titular church of Sant'Antonio da Padova in Via Tuscolana in the College of Cardinals .

At the beginning of his tenure as Archbishop of São Paulo, he sold the Bishop's Palace and used the proceeds to build a social station in the favelas . Paulo Evaristo Arns is an advocate of liberation theology and, as an opponent of the military dictatorship, became one of the most popular churchmen in Brazil. In the late 1970s, for example, he headed the research project Tortura Nunca Mais (“Never Again Torture”). He was threatened by the so-called " death squads " of the respective rulers, but continued to work.

Cardinal Arns was Chancellor of the Pontifical Catholic University of São Paulo during the military dictatorship . He particularly distinguished himself there by admitting professors who had lost their professorships at state universities for ideological reasons.

Paulo Evaristo Arns is laid out in the Catedral da Sé in Sao Paulo, December 14, 2016

At the age of almost 77, he retired on April 15, 1998, after having submitted the resignation request provided for in canon law to Pope John Paul II on his 75th birthday in 1996 . At the conclave in 2005 after the death of Pope John Paul II. And at the conclave in 2013 , he did not participate more because he had exceeded the age limit of 80 years.

Since the death of Eugênio de Araújo Sales in July 2012, Arns was the longest serving cardinal priest and thus cardinal proto-priest. In addition to the former cardinal and Pope Benedict XVI. he was also the last living cardinal who was still from Paul VI. was created. He last lived in a Franciscan convent in Taboão da Serra and avoided the public for the most part.

Arns was hospitalized in December 2016 with pneumonia and died on the morning of December 14th. His tomb is in the crypt of the São Paulo Cathedral .

Cardinal Arns wrote 49 books. The focus was on the preaching office in big cities and the literature of the early church . He also wrote hundreds of articles for newspapers where he was an editor before his episcopate.