In some material systems , the phase interfaces between the liquid and gaseous phase disappear above a critical point , which is characterized by a critical temperature and a critical pressure . Under these conditions, liquid and gas are only one phase that is called "supercritical". This means that there can no longer be any evaporation or condensation.

Likewise, in some material systems there can be a triple point at which both a solid and a liquid and a gaseous phase are in equilibrium with each other and, accordingly, all six first-mentioned forms of the phase transition take place simultaneously.

Other types of phase transitions are mentioned below.

Classification according to Ehrenfest

Basically, phase transitions according to the Ehrenfest classification (according to Paul Ehrenfest ) are divided into different orders. To do this, one considers thermodynamic quantities such as volume , enthalpy or entropy as a function of one (or more) variables, usually temperature. The system is described by a thermodynamic potential  G ( Gibbs energy , free enthalpy). In the case of a phase transition of the nth order, G as a function z. B. Considered the temperature (or the pressure) together with its first n-1 derivatives continuously , only the n-th derivative is discontinuous.

Phase transitions are described in more detail in Landau's theory , where the phases change from disordered phases to ordered phases with the simultaneous appearance of a new order parameter as a result of symmetry breaks. These are characterized by accompanying jumps of macroscopic quantities such as magnetization or the deformation of a crystal lattice . 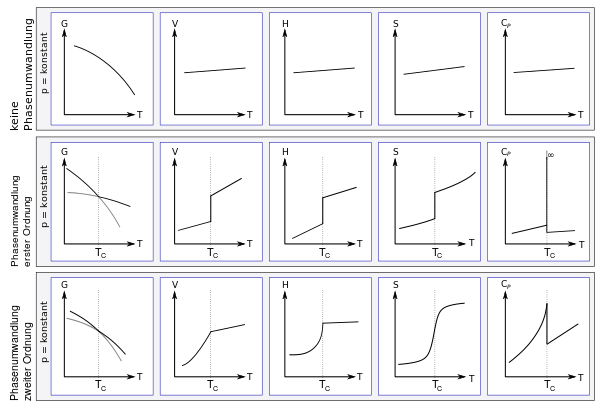 In addition to this basic classification, there are a number of other distinctions in special areas of application.

According to the structural classification, a distinction is made in mineralogy :

In both cases, large-scale periodicities can occur which superimpose the lattice structure. These are called incommensurable structures.

The kinetic classification divides phase transitions according to their reaction rate into:

In terms of flow dynamics , a distinction is made between speed transitions, where flow properties change suddenly and massively, e.g. B. the change in important values ​​such as drag and buoyancy in gases and liquids. An important area is the critical transition from subcritical to supercritical (see Reynolds number , laminar flow , turbulent flow ).

Very different types of continuous phase transitions can be summarized in universality classes, which is ultimately again due to the divergence of the correlation length. These classes can be characterized by a few parameters, for example by a critical exponent . This is the exponent of a power law that describes how an order parameter disappears near the critical point, e.g. B. as a function of the distance between the temperature and the critical point.

The relationship between the fundamental symmetries of the respective phases and the values ​​of these parameters has been extensively investigated theoretically in the framework of statistical physics over the past decades and has also been checked in a large number of experiments and computer simulations .

The Landau or mean field theory is sometimes used in theoretical descriptions of phase transitions . Here, however, critical thermal fluctuations are neglected, which can play an essential role in the vicinity of the transition (and are observed, for example, in the critical opalescence ). The Landau theory can nevertheless provide valuable initial insights as a starting point for more precise theories (from the scale theory of Pokrowski and Patashinski to the epsilon development by KG Wilson and ME Fisher ).

This has been recognized in particular by Kenneth G. Wilson, who received the Nobel Prize in 1982 for pioneering work on continuous phase transitions. Wilson is one of the decisive pioneers of renormalization group theory , which takes into account that with continuous phase transitions the critical fluctuations take place in self-similar form on many length scales . Analog theories are used today in many areas of physics and mathematics.

Knowledge of the physicochemical conditions under which phase transitions occur allows mineralogists to draw conclusions about the history of rock formation. When a rock is exposed to high pressures and temperatures, a phase change occurs in many cases. Assuming that the subsequent cooling takes place so quickly that the reverse reaction no longer takes place due to the diffusion that is hardly possible at low temperatures, one can assume that the minerals that are stable at high temperatures and pressures will be "frozen" and so on Earth's surface are preserved. This enables statements to be made about the temperatures and pressures a rock has "seen" in the course of its genesis. Examples of this are the phase transitions between andalusite , sillimanite and thistene in the area of ​​aluminosilicates, the conversion of graphite into diamond and of quartz into coesite or stishovite . The knowledge of phase transitions acquired through experimental mineralogy also explains the rheological behavior of the earth's mantle: The iron-magnesium silicate olivine is transformed at a depth of 410 km into the wadsleyite , which crystallizes in the β-spinel structure , which in turn is further in the converts ringwoodite occurring in the γ-spinel structure (see also the articles 410 km discontinuity and 520 km discontinuity ). There are no chemical changes at all, only a change in the crystal structure. Using the example of the conversion of coesite into stishovite, it is easy to explain why a phase transition occurs: Under normal conditions, silicon is surrounded by four oxygen atoms , but under high pressures the atoms move closer together so that the coordination by six oxygen atoms is energetically more favorable .

In the field of conservation of art objects, the objects are often stored in a cool and dry place and are also exhibited. This is not correct for objects made of tin , because below 15 ° C this changes into another modification, the external appearance of which is not very attractive and which is known as tin plague .

For art history it is interesting to know that in the past the blue pigment azurite was often used to depict the sky. Over the centuries, however, this has been converted into the thermodynamically stable form malachite , which is green. As a result, the sky is sometimes green in old pictures.

In steel production, the transformation of the iron modification from austenite to ferrite or martensite is associated with changes in the structure, which are of great importance for the properties of the steel.

In two-dimensional materials, e.g. B. in thin magnetic layers, there can only be long-range order and thus a phase transition under limited conditions. This interesting aspect is dealt with in the Mermin-Wagner theorem (after N. David Mermin and Herbert Wagner ) and has also been investigated experimentally.

Paraffins have a particularly large change in volume of around 30% during the phase transition from solid to liquid. This hub can be used for the construction of actuators .

A number of methods are used to measure phase transitions, such as: B .: