The Primuloideae are a subfamily of the family of the Primrose (Primulaceae) in the order of the heather-like (Ericales) within the flowering plant . They can be found from the permafrost zone to the tropics ; However, their main distribution is in the northern temperate climate zone. Many species are used as ornamental plants . The medicinal effects of some species have been studied; the drug of some primrose species is called Primulae radix. 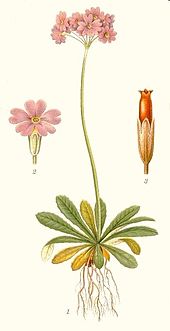 Illustration of the flour primrose ( Primula farinosa ) with a basal rosette of leaves, a long inflorescence stem, dold-like inflorescence and five-fold flowers

Primula jeffreyi with the petals turned back

They are mostly perennial, rarely annual or rarely biennial, herbaceous plants . Some Androsace species are somewhat xerophytic . Some Primula species form rhizomes or stolons . Some Primula species with glandular hairs form a crystalline substance that envelops them in a floury form ( flour primrose ). Resin canals are present at Hottonia .

The leaves are alternate and spiral or opposite, often in basal rosettes or distributed on the stem, in Hottonia arranged in whorls ( phyllotaxis ). The stalked or sessile leaves are usually simple, pinnate in Hottonia . The leaf margins can be smooth, indented to toothed or ciliate. Stipules are missing.

The flowers are terminally solitary or in dold-like inflorescences mostly with bracts; an inflorescence stem can be formed. The hermaphroditic, radial symmetry flowers are usually four to five-fold and with a double flower envelope (perianth). The four to five green sepals are fused. The four to five petals are usually fused to one another ( sympetalie ) with a long to short corolla tube; in some taxa the petals are more or less deeply divided into two. There is only one (the inner) circle with mostly five free stamens , which can be fused at their base. The stamens are fused with the corolla tube on or above the middle. There are no staminodes . Five carpels are a einfächerigen, Upper permanent ovary grown. The few to many anatropic, bitegmic, tenuinucellate ovules are arranged in a free central placentation . The stylus ends in a mostly cephalic scar. Heterostyly is common ( Hottonia , Primula ). Pollination occurs by insects ( entomophilia ).

There are fruit capsules formed, containing (a to about 200), usually two to 100 seeds. The angular to rounded, brown or black seeds contain a lot of oily, starch-free endosperm and a straight embryo . An elaiosome is present in some Primula species . The seeds are dispersed by gravity, water, wind or ants.

There are cucurbitacins present. The triterpene saponins of some primrose species are used as expectorants . Many primrose species produce the benzoquinone derivative primin as glandular secretion , which can cause skin irritation on contact. 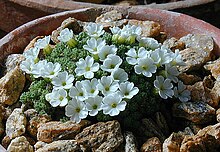 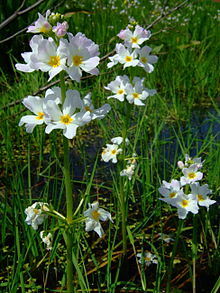 Inflorescence of Soldanella carpatica with a relatively long shaft inflorescence

The subfamily Primuloideae was set up in 1834 by Vincenz Franz Kosteletzky in General Medical-Pharmaceutical Flora , 3, p. 986.

The scope of the Primulaceae family has long been debated, sometimes very broad or very narrow. Now a very broad conception of the family seems to prevail through a summary of morphological and molecular biological data. The family of the Primulaceae thereby receives the extent of the earlier order of the Primulales. The Primulaceae s. l. are divided into four subfamilies. The subfamily of the Primuloideae corresponds exactly to the extent of the last the Primulaceae s. st. exhibited. Molecular biological data show that the genus Primula is not monophyletic in its earlier extent and that the species of the earlier genera Dodecatheon , Cortusa , Sredinskya and Dionysia belong to the greatly expanded genus Primula with six subgenera and many sections. The same investigations showed that the species of the earlier genera Pomatosace and Douglasia are to be placed in the genus Androsace with several sections. So the number of genera was reduced. The other possibility would have been to split the genera Androsace and Primula into many smaller genera.

The subfamily Primuloideae today only includes six to nine, previously up to twelve genera with around 900 species: