The title of this article is ambiguous. Further meanings are listed under Rize (disambiguation) .
Template: Infobox location in Turkey / maintenance / district

Rize ( Laz : Rizini / რიზინი) is a northeastern Turkish city on the Black Sea , and lies at the foot of the Kaçkar Mountains , the easternmost and highest part of the Pontic mountains in a Height between 5 and 160 meters. It is the capital of the province of the same name Rize and at the same time the center of a district directly subordinate to the governor, the central district ( Merkez ).

The city is located about 660 km as the crow flies east of the state capital Ankara and 110 km from the Georgian border ( Batumi ).

The name could possibly be derived from the Greek ριζά - rizá = "under the mountain".

In 1987 (creation of Güneysu district) and 1990 (creation of Derepazarı and İyidere districts), the district gave about 45% of its territory (based on the 2014 area data) to the three new districts. In relation to the figures from the 1985 census , this was 28.3% of the then district population.

The temperate climate of this region is mild and extremely rainy. With annual rainfall averaging 2245 mm per square meter, Rize is the city with the most rainfall in Turkey.

The following table shows the comparative population level at the end of the year for the province, the central district and the city of Rize as well as the respective share at the higher administrative level. The figures are based on the address-based population register (ADNKS) introduced in 2007.

The following population information about the city, the district, the province and the country is available for the censuses:

The history of the city goes back several millennia. The city ​​called Rhizous by the Greeks ( Greek  Ῥιζοῦς , Latin Rhizus , German Rhizäum ) belonged to the ancient landscape of Colchis . It was part of various empires such as Urartu , Lasika , Georgia , Byzantium , Pontus and the Trebizond Empire . In 1461 it was conquered by the Turkish Ottomans under Sultan Mehmed II and became the capital of Sanjak Lazistan . During World War I , the Russian army marched into Rize on March 4, 1916 after a successful landing. After two years, the city was given back to Turkey in the Brest-Litovsk peace treaty with Soviet Russia .

The eastern part of the province is mainly populated by the South Caucasian Lasen people , who converted from the Georgian Orthodox faith to Islam as early as the 16th century and are now largely integrated into the Turkish state structure.

The historically oldest building in the city center is the Rize Kalesi ( Rize Castle) with the wall that partially extends to the beach. The facilities were built around 550 AD at the time of Justinian I to protect against the Persians and are partly still in good condition.

Outside the city center there are many other, mostly smaller, castle complexes.

Other historically significant buildings from the Ottoman period in the city center are some mosques.

In Byzantine times , Rize was known for its textile products made from linen and hemp fibers. They are still known in Turkey today under the name Rize Bezi (Rize cloth). "... but especially embroidered clothes and brightly colored witnesses made of linen from Rhizäum had a high degree of craftsmanship," described the Austrian orientalist Jakob Philipp Fallmerayer about the times of the Trapezunt Empire . This artistry probably goes back even further to the pre-Christian times of the Colchis , who were very famous for their products made of canvas.

However, with the increase in mass production in Turkey's textile industry since the 1980s, most of the craft shops in Rize have had to close.

The town of Rize, with tea fields in the foreground

The Recep Tayyip Erdoğan University , founded in 2006, has its headquarters and main campus in the city of Rize. Some areas are located in the provincial districts of Pazar, Ardeşen, Fındıklı and Güneysu.

The Rize tea , including cultivation, processing and marketing, is the main source of income for the city and the province of Rize.

The largest employer in the city and the province of Rize is Çay İşletmeleri Genel Müdürlüğü (Çaykur - General Directorate for Tea Companies) with headquarters in the city of Rize. This state-owned company was founded in 1982 and took over the previous state-owned company Çay Kurumu Genel Müdürlüğü (General Directorate for Tea Authority). Çaykur mainly employs around 16,500 people in over 50 locations (mostly tea factories) in the provinces of Rize, Trabzon and Artvin.

Çaykur is the largest manufacturer of tea products in Turkey. In addition to Çaykur, many private companies such as Unilever- Lipton, Doğuş Çay and many others have their tea companies in and around Rize. 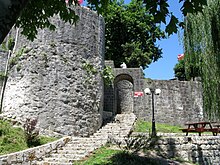