The church is located in the 1st Roman Rione Monti , in the valley between the hills Viminal and Esquilin and between today's Via Urbana (the ancient Vicus Patricius) and Via Cesare Balbo, about 400 meters northwest of the Basilica Santa Maria Maggiore . Today's impression of a hollow about 3 meters below Via Urbana should not hide the fact that the church was only adjacent to hilly terrain in the apse area at the time of construction, but that at that time a few steps led up to the church portal.

The church was first referred to as Titulus Pudentis or Titulus Pudentiana (around 384), then also as Ecclesia Pudentiana (401-417), at the beginning of the 6th century for the first time as Sancta Potentiana and in 745 as Ecclesia tituli sanctae Potentianae . It was consecrated to the Roman martyr Pudentiana . According to tradition, the biological sisters Pudentiana and Praxedis died as martyrs in Rome at the turn of the 1st and 2nd centuries; they are said to have been daughters of Paul's student Pudens .

Below the church are the remains of Roman buildings from the 1st and 2nd centuries, which are only exceptionally accessible to the public for safety reasons.

Already in 384 (or shortly before) the Titulus Pudentis was founded under Bishop Damasus I (366–384) in the densely populated suburb of Subura ; this emerges from the funerary inscription of Lector Leopardus who was then active there. Another inscription on the barrier plates of the early Christian presbytery says that afterwards, under Bishop Siricius (384-399), the furnishings and furnishings of the chancel were donated by the presbyters Ilicius, Maximus and Leopardus. Finally, the inscription of the three presbyters mentioned under the apse mosaic from around 415 says that the construction of this richly furnished early Christian church was completed under the episcopate of Innocent I (401-417).

The first church was established around 384 in a Roman apsidal hall, which was part of a larger building complex from the 2nd century. The intended use is not known; maybe it was the thermal baths belonging to the private house Domus Pudentiana . The bricks used were stamped by the brickworks of Quintus Servilius Pudens, who was a member of a well-known Roman family of the 2nd century. This family could also have owned the Domus Pudentiana , which was then perhaps passed on to the Christian community by a descendant in the 4th century to establish the title church.

The question of whether the name of the church can be traced back to the house owner at the time (and possible further donors) from the Pudens family, or whether there is a connection with the martyrs Pudentiana and Praxedis, is answered differently. The art historian Beat Brenk explained:

“The name Pudentiana is nothing more than an adjective that was apparently already associated with the Domus and the Thermensaal, because during the excavations a brick stamp with the name Q. Servilio Pudente from 128-133 came to light, in which a point of connection was found for the name of the house. "

When the ancient apse hall was converted into the Titulus Pudentis , the six pillars on each side supporting the arcades and the upper aisles with arched windows were initially retained. The apse emerged from the flat wall in the west ; the side corridors became aisles ; the entrance was moved to the east. The three-aisled basilica building had the dimensions of approx. 27.5 × 17 meters. At the beginning of the 5th century, a St. Peter's Chapel was added to end the left aisle.

Towards the end of the 8th century, Pope Hadrian I (772–795) had a restoration carried out and the nave of the church expanded by two bays to the east and given a renewed facade . At the same time, the arcade pillars from the ancient apse hall were replaced by late antique columns with palmette capitals from the 4th century. At the end of the 11th century, the chapel in honor of hll was built in the middle of the left aisle. Pastor and John the Baptist , rededicated and redesigned in the 16th century as the burial chapel of the Caetani family ; With its splendid marble architecture and mosaic furnishings, it is one of the richest family chapels in Rome. The five-storey campanile dates from the 12th / 13th centuries. Century.

Around 1588 under Pope Sixtus V (1585–1590), who transferred the church to the Feuillanten to found the monastery, the church was given its present form. The three-aisled basilica became a single-nave hall church with pillars around the former columns, barrel vaults , an oval dome over the chancel and side chapels, including the burial chapel of the Caetani family by the architects Francesco da Volterra and Carlo Maderno . Inside, the Schola Cantorum and the old floor covering were removed .

In 1870 the outside staircase was built between Via Urbana and the lower courtyard of the church; At the same time, the facade was redesigned and the former portal frieze from the 11th century was used again. 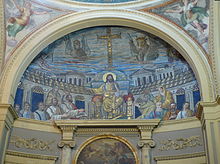 The choir screens in the presbytery and the large mosaic in the apse were part of the valuable initial furnishings of the early Christian basilica . The mosaic created under Pope Innocent I (401–417) is the oldest surviving Christian mosaic after the mosaics in the mausoleum of Constantia (around 370). As one of the most important works of early Christian art, it also occupies a special position in artistic execution.

When the choir dome was installed (1588) and during the restorations in the 18th century, parts of the apse mosaic were lost, including two apostles at the edges, parts of the footstool before Christ and below the dove as a symbol of the Holy Spirit as well as the Lamb of God and the lamb procession from the city gates of Bethlehem and Jerusalem on the edges of the picture; in addition, the two outer apocalyptic beings are no longer entirely visible; there is also a drawing by Alfonso Chacón (1588) showing the original state. In the 19th century, missing spots - clearly visible - were added, especially parts of the group of people gathered around Peter .

In the center sits Christ with a nimbus , long hair and beard, dressed like an imperial ruler, on a wide throne adorned with precious stones . He raised his right hand in a gesture of speech; in his left hand he holds an open book in which he is described as the patron of the Church of the Pudentiana. It is the picture of a teaching meeting with Christ as the teaching philosopher . Next to him sit the apostles who are arguing with raised hands and getting smaller and smaller towards the edges. The only apostles Peter (right) and Paul (left) shown in profile are crowned by two women as personifications of the church, which consists of Jewish Christians ( Ecclesia ex circumcisione ) and Gentile Christians ( Ecclesia ex gentibus ). It is the earliest artistic representation of this subject with the distinction of the two apostles for the conversion of the Jews through Peter and the mission among the Gentiles through Paul.

In the background, a semicircular archway covered with gilded tiles becomes visible, and above it the heavenly Jerusalem . Mount Golgotha rises behind the city silhouette with the monumental gem cross , surrounded by the (originally four) evangelist symbols (from left): winged creature for Matthew , lion for Mark , bull for Luke and eagle for John . Due to the apocalyptic reference, the mosaic experiences an eschatological interpretation that depicts Christ and his apostles as a court tribunal.

The marble frieze above the portal of the church dates from the 11th century. Five medallions are depicted on it between leaf tendrils (from left): St. Pastor (as priest of Titulus with book), Pudentiana (daughter of Pudens, as wise virgin with crown and oil jar), Agnus Dei , Praxedis (sister of Pudentiana), Pudens (with toga of the Roman senator and scroll ). Each medallion has an inscription on the edge.

Between the outer wall of the apse and Via Cesare Balbo, there has been a Chapel of Our Lady since the 9th century, in the remains of the walls of the ancient building complex, in which the house church of the 2nd century was probably located. Wall paintings from the 9th to 11th centuries have been preserved in the chapel: On the altar wall (rear wall of the apse) the Mother of God with the child between Pudentiana and Praxedis, who present the crown of martyrdom with wrapped hands. Left wall: St. Paul preaches in the house of the powder; Paul baptizes Timothy and Novatus (sons of Puden); Baptism of Pudentiana and Praxedis. In the cross vault the four evangelist symbols and the Lamb of God.

The rear portal building with the four open arches to Via Cesare Balbo is one of the ancient building remains of the 2nd century and was restored to its original state in 1931.

Under the center of today's nave, an underground room (referred to as the “ catacomb ” in technical literature ) with a mural from the 8th or 9th century has been preserved within the building complex from the 2nd century . Despite the bad condition, the hll. Paul, Praxedis and Pudentiana to be recognized.