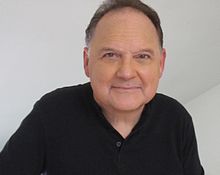 Stephen Furst , actually Stephen Nelson Feuerstein, (born May 8, 1954 in Norfolk , Virginia - † June 16, 2017 in Moorpark , California ) was an American actor , film and television director and film producer . He was best known for his roles as Dr. Elliot Axelrod in the hospital series Chief Physician Dr. Westphall and as Vir Cotto in the science fiction series Babylon 5 .

Stephen Furst began his acting career in 1975 and gained his first major fame three years later for a role in the film I believe a horse kicks me , which quickly became a cult film in the United States . Furst got his role in this film in an unusual way: for a living he worked as a pizza delivery man in Hollywood and always included a photo of himself with his deliveries. This is how Matty Simmons , producer of the film, became aware of Furst. In the following years he worked in numerous other films and television series. In 1983 he took over chief physician Dr. Westphall played a leading role for the first time and embodied the doctor Dr. Elliot Axelrod in 97 episodes until 1988. In addition, his best-known role is that of Centauri Vir Cotto in the science fiction series Babylon 5, which was filmed from 1994 to 1998 . Between 1995 and 2001, Furst also worked as a voice actor for various cartoon series , including between 2000 and 2001 in 61 episodes of Captain Buzz Lightyear - Star Command .

Since 1994 he has also worked as a director and shot several episodes of Babylon 5 and its offshoot Crusade as well as several independent and low-budget films .

Furst suffered from diabetes , from which his father and one of his sisters had already died. Because of this illness, his left foot almost had to be amputated in 1996. He was a spokesman for the American Diabetes Foundation and produced a video called Diabetes for Guys . He dealt with his illness in the book Confessions of a Couch Potato .

Furst was married to Lorraine Furst and had two sons with her who also work in the film business. His older son Nathan is a film composer , his younger son Griff works as an actor, director, film producer and musician. Stephen Furst was one of the executive producers of the film, which Griff Furst co-produced, In My Sister's Life .

Stephen Furst died on June 16, 2017 of complications from his diabetes.