The Union Sportive Arlequins Perpignan ( French ) or Unió Esportiva Arlequins de Perpinyà ( catal. ), Mostly abbreviated to USA Perpignan or USAP, is a rugby union club from the French city ​​of Perpignan in the Pyrénées-Orientales department . He is represented in the second top division Pro D2 and plays his home games in the Stade Aimé-Giral .

The club colors are red and yellow, corresponding to the Catalan flag . In northern French Catalonia , the USAP is a symbol of Catalan identity. The club's motto is in Catalan and is "Semper Endavant" (always forward). From the mid-1990s, L'Estaca by the Catalan singer-songwriter Lluís Llach became the club's unofficial anthem. The USAP partnered with FC Barcelona in 2004, which also has a rugby division.

The United States also had a football division , which even competed in professional Division 2 for two seasons immediately after World War II .

The club was founded in 1902 under the name Association sportive perpignanaise (ASP) and played in the Catalan national colors from the start. In 1909 he absorbed the Perpignan sportif club that had been founded a few years earlier . In 1911, the ASP made it to the top division, but the following year some members split off and founded the Stade olympique perpignanais (SOP), which remained in the second division. However, this did not prevent ASP from winning the first championship title in 1914; in the final Stadoceste Tarbais was defeated.

During the First World War , gaming operations largely ceased. In 1919, ASP and SOP reunited and formed the Union sportive perpignanaise (USP). In 1921 the USP won the French championship for the second time, after beating Stade Toulousain in the final . Three years later, both teams met again in the all-important game, but the USP lost. In 1925 Perpignan was able to celebrate his third championship title, this time against US Carcassonne . The championship final in 1926, however, was lost to Stade Toulousain. 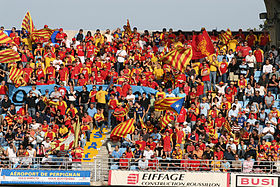 Fans of USA Perpignan in the Catalan national colors

In May 1933, the USP merged with the Arlequins association, which had only been founded a few years earlier. This gave rise to the name Union Sportive Arlequins Perpignan, which still exists today. The USAP was defeated by the Basque club Biarritz Olympique in the championship final in 1935 , but won the Challenge Yves du Manoir . In this prestigious tournament there were three defeats in the final between 1936 and 1938. In 1938 Perpignan won the fourth league title; however, the inferior in the final Biarritz Olympique retaliated and kept the better end to itself in the final of the championship in 1939.

In 1944, the USAP advanced again to the championship final and was able to defeat Aviron Bayonnais . In 1952 the USAP lost to Lourdes FC and finished second in the championship. In 1955 both teams met again in the final; Perpignan won the sixth championship title. Perpignan only reached a final 22 years later, but was subject to AS Béziers .

In 2014, the USA Perpignan rose after 103 years of membership in the first division in the Pro D2 . In the 2017/18 season they managed to climb back into the top 14, but after only one season they were relegated to the second division.

During the 1940s Perpignan's footballers had professional status and entered one season ( 1942/43 ) in the southern group of the first division, which today is not considered the official championship . In the same season , the USA was also in the national cup - which was initially played in three zones during the war and German occupation of parts of France - in the partial competition of the unoccupied zone after victories over Toulouse FC , AS Saint-Étienne and ESA Brive to the final ; only then did they lose 3-0 to Olympique Marseille . After the liberation of the country, "the Catalans" were still represented for two seasons in the second division from 1945 and had also reached the main round in the cup competition three more times from 1944 to 1947. From the early 1950s, however, local rivals FC Perpignan dominated football in the city.