From Teufelsmoor to the Wadden Sea

From the Teufelsmoor to the Wadden Sea is a cycle path through the Elbe-Weser triangle and along the North Sea .

The 450 km long cycle path leads through a region that is characterized by natural diversity and cultural features. It was developed in cooperation with the Naturschutzbund Deutschland (NABU) and the tourism organizations of the districts of Cuxhaven , Stade , Rotenburg (Wümme) and the cities of Bremen and Bremerhaven .

Large parts of the cycle path lead through moor areas 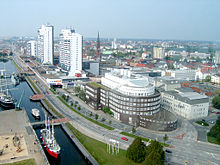 In Bremerhaven, in addition to maritime flair (the German Maritime Museum on the left), the Alfred Wegener Institute (AWI) can be found in front and behind it the towers of the Columbus Center - the Great Church looks almost small next to it

The cycle path covers the entire area between the Weser and the Elbe inland to the Bremen - Bremervörde - Stade line.

You can cycle through the Bürgerpark in Bremen's green lungs. But even in the city center you can quickly get to the market square, Böttcherstraße , Schnoorviertel or the " Schlachte " (Weser promenade) by bike . A number of places steeped in history can be reached quickly. It is a little further to " Universum ", to the Rhododendron Park or to the various docks .

The Teufelsmoor has become a cultivated land through peat extraction . Endangered animal species have returned to the sheltered parts of the Teufelsmoor. But culture has also found its way into the main town of Worpswede : The Worpswede painters have brought galleries with them. The museum has information from prehistoric times. The best way to experience the originality is on guided hikes or peat barge trips .

On the Wümme you can get off your bike and experience the river landscape from the water. Here, as in the other districts of the Elbe-Weser triangle , cyclists can take a break in the " Melkhüsern " (Low German for milk inns ) along the way (mostly on farms). In the historic Augustendorf Moorhof , insights into the hard life of the first settlers in the moor are provided. On the site of the former Sandbostel camp , an exhibition provides information about the history before and during the Second World War. In Bevern , you can find out how materials for houses were made in the historic Pape brickworks. Archeology and folklore are at home in the Bachmann Museum in Bremervörde . The nature and adventure park with the environmental pyramid of NABU is located on Lake Vörder. The glass museum recalls the time when the glass industry flourished in Gnarrenburg .

The Kehdinger Land extends between the old Hanseatic city of Stade with its " Schwedenspeicher " museum and numerous other sights and Otterndorf , a region that is characterized by its diverse natural landscape. On the water, with a lorry through the Kehdinger Moor , with a moving observation station of a bus and in the museum with 60,000 m² of open-air space, you can experience nature when you get off your bike.

In terms of area, the district of Cuxhaven is one of the largest in the Federal Republic of Germany. In addition to the beach on the Weser and Elbe , you can cycle through marshes and the higher Geest - but there are also low and high moors. 22 signposted cycle routes and nine long-distance cycle paths lead through the Cuxland. Particularly worthwhile destinations are the Kutterhafen in Wremen , the Aeronauticum in Nordholz , the Moorbahn in Ahlen-Falkenberg, the zoo in Wingst , the sculpture park in Kramelheide and the historic old town of Otterndorf . History becomes clear in the Bederkesa Castle with the museum and in the Hermann Allmers House on the dike in Sandstedt .

The seaside city of Bremerhaven presents an abundance of tourist destinations on the Weser at the entrance to the North Sea: the German Maritime Museum , the Emigration Center , the Climate House, the technology museum U-Boot Wilhelm Bauer , the Atlanticum and the "shop window" in the fishing port .

In addition to cycling, you can also travel through the region by other means of transport.

With the train connection known as the Moorexpress , a land-based means of transport across the Teufelsmoor emerged for the first time in 1909. Today it is a tourist event - bicycles are often taken if you only want to cycle part of the route yourself.

The cycle touring bus connects the places close to the Elbe in the district of Stade (from Horneburg via Jork , Stade, Wischhafen to the East Estuary in Balje ) if you want to get ahead faster than by bike. A second bicycle bus runs between Cuxhaven and Bremerhaven along the Wurster coast in the summer months - the day ticket also includes the city tour in Bremerhaven.

You can experience natural landscapes on the cycle path from Teufelsmoor to the Wadden Sea. The Naturschutzbund Deutschland (NABU) supports the local flora and fauna and maintains the environmental pyramid in Bremervörde in the middle of the Elbe-Weser triangle.

The cycle path from Teufelsmoor to the Wadden Sea is supported by the country's tourist organizations between Weser and Elbe. There is an abundance of contact options for municipalities, joint municipalities, districts and cities along the way. The organization in Stade is in charge.

Bremen is a bike-friendly city. There is a large bike service station at the train station (repair, parking, rental). The ADFC (General German Bicycle Club) founded in Bremen is also represented at the train station. There are bicycle workshops in all larger towns on or on the edge of the route. In Stade you can park your bike in the station next to the tourist information.